How the PlayStation 4's 'Playroom' brought out the worst in gamers

How the PlayStation 4's 'Playroom' brought out the worst in gamers

The stars of Sony's The Playroom are meant to be its robots. Small, white, and cute, they jump and wiggle around at the feet of their owner. The Playroom — an alternate reality game that comes pre-loaded on PlayStation 4 — projects the miniature machines into players' living rooms. Using the PlayStation Camera, players can interact with them, kicking, flicking, and cradling them as they frolic and cower.

But on the world's biggest video-game streaming site, Twitch, the stars of The Playroom haven't been its robots — they've been its players. The PlayStation 4 can stream any of its games live. Streaming a video game is like having someone watch over your shoulder as you play: both streamer and viewer are absorbed by the same rendered, imagined, computerized world. But streaming The Playroom is showing the internet your real world. It's not an invented universe you're displaying in 720p for others to watch: that's your couch and coffee table, and those are your family members.

Her husband stripped her clothes off as she lay on the couch, unconscious

These stars have played with The Playroom's white robots, but they've also done stranger, darker things. They've put shoes on their head at the exhortation of others watching their broadcast live. They've had sex in front of their TV screen. They've stripped their wife naked as she lay seemingly unconscious on a couch. They've had to explain to a local police department that they didn't have a child locked up in their basement after viewers called to tip the cops off to the suspected crime. 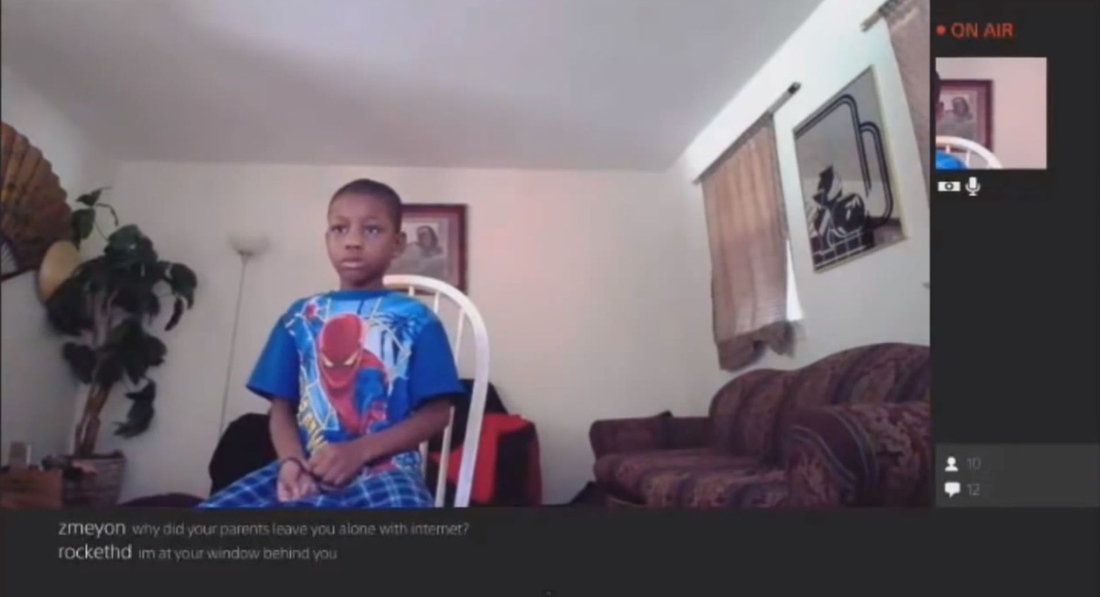 Someone tells the child he's "outside his window'

They've been a young child standing silently in his house as an anonymous someone uses his TV to tell him he's "outside his window." The child's eyes grow wide and he turns around to check. He's still too short to see out of the window, so he stands on a chair and gingerly pulls a curtain aside to peek out, before nervously shaking his head.

Less than two weeks after the PlayStation 4's launch, Twitch banned streams of The Playroom. Two disturbing questions remain: how did the streams turn sour so quickly, and why didn't anybody see these problems coming?

"The Spartan Show" was one of the first PS4 live streams to gain a notable following on Twitch. Around 5,000 people tuned in to see a phone-in show helmed by a husband and wife duo on the console's launch night. Among the first callers was Sony's own Adam Boyes.

Cool to dial in to the @thespartanshow even though I sound sick as a dog!

Sony Computer Entertainment president Shuhei Yoshida tweeted his approval shortly afterwards, confirming he was watching the impromptu broadcast. The show's early calls were positive and cheerful, and riding a wave of post-launch adrenaline, the duo kept their show live through most of the PS4's first night.

They continued in the week that followed, hosting "The Spartan Show" through The Playroom. But the tone of the calls changed. Callers aiming to troll were surreptitiously hung up on as the show's hosts pretended their connection had dropped. Questions became needling and cruel. Several pages of a 100-page post on gaming super-forum NeoGAF were devoted to belittling the fact that the hosts of "The Spartan Show" misidentified cult action-RPG Dark Souls as a first-person shooter to one caller.

5,000 people tuned in to watch 'The Spartan Show' on the PlayStation 4's launch night

Sony first announced that its PlayStation 4 was capable of streaming live to Twitch at E3 2013. Microsoft had announced a deal with the site prior to the gaming trade show, whereas Sony had touted a partnership with the more generalist Ustream. Where Twitch focuses exclusively on video games and boasts the largest viewer number, Ustream forces game content to share space with computing tutorials and trade shows. In switching to the more specialized service, Sony was seen to be rushing to slam its ear to the ground, picking up current video-game trends without truly understanding them.

Twitch itself answers the question "who watches other people play video games" with staggering statistics. Twitch draws more than 35 million unique visitors per month, up from 20 million last September, when it pulled in $15 million in investment capital.

That growth has created a large but proudly insular community of users tech-savvy enough to watch and comment on PC games so deep they're played professionally. Twitch's top five most-viewed games have particularly high barriers to entry. Dota 2 and League of Legends demand their players learn the moves of more than 100 characters; World of Tanks necessitates knowledge of endless tank armor thicknesses and shell arcs. These are hardcore games, and the people who watch them are serious, passionate, and speak in arcane in-jokes.

Streaming live can be a career path or a bear pit

For those who know their games and their audience, streaming can be a viable career path or a window to a fan base and new friends. For those unaccustomed to /b/ or /v/ invasions, for children left alone in front of the internet at large, or for unconscious people with unscrupulous partners, it can be a bear pit. Twitch's own community is also quick to turn on interlopers. In the wider narrative of a "console war" between Microsoft, Sony, and Nintendo, Twitch remains a bastion of a self-styled "master race" of PC gamers. The most dedicated of this community are snooty about console "toys" that only recently have been able to access their almost PC-exclusive segment of the internet. Kotaku highlights a Reddit post that points out neither Sony nor Twitch provide a guide to streaming, or a warning of the potential dangers of doing so to a largely unregulated audience.

Short on dedicated moderators to weed out the influx of negative comments from viewers and questionable content from streamers, Twitch simply removed The Playroom from its directory, making streaming the game impossible. In a statement, Twitch said "we removed Playroom content from the directory because a majority of it was non-gaming related. We will look into adding it back as PS4 owners become more familiar with the games-only focus of Twitch content." The company has pointed to its Terms of Service and reiterated its gaming focus several times in recent days, reminding users that streams need to be about games, not simply enabled through games.

Non-gaming content (c): If using PS4 Playroom, the content must be about games or gaming and within our ToS. Thanks for understanding. 2/2

Sony may not have foreseen the problems that would occur with The Playroom streams. Adam Boyes suggested as much when he called "The Spartan Show," saying Sony "always just thought people would do streams," but that it "never thought people would do them with PlayRoom." The logistics of the game, too, make it a special case. It demands the use of the pricy PlayStation camera that doesn't ship with the console, and unlike almost all other games, sets its action in your house. Although other streamers — such as StarCraft II superstar Day[9] — show their homes and faces during streams, Sony's bundled game is the only one to focus exclusively on its owners' living rooms.

In a move that now appears sage, competitor Microsoft withheld Twitch integration from its Xbox One launch package, planning to introduce the feature in early 2014. Sony's major rival had to respond to similar issues when it launched the Xbox Vision Camera in 2006. In a spot of impressive outside-the-box thinking, the device allowed Xbox 360 users to import their faces to games such as Rainbow Six: Vegas, but it gained most notoriety as a means of transmitting pornography while playing virtual Uno. Microsoft, like Sony and Twitch 7 years later, found no quick fix beyond booting perpetrators from its service as one parent found out when she questioned why her account was banned until the year 9999 from Xbox Live. Her son, reportedly, had been exposing his genitalia while playing card games.

The rise, rapid descent, and subsequent banning of The Playroom on Twitch is a lesson for Sony. Racing to be part of the fastest-growing subsection of the largest entertainment medium in the world is more difficult when the people who inhabit that space already are entrenched, and have their own specific ways of doing things. As for the worrying content: it may just be human nature that given a camera and a means to communicate, we'll do so in a way that is by turns ingenious and disturbing.