Share All sharing options for: Spec Sheet: Acer's and HP's Chromebooks battle over price and power

Chromebooks have become a whole lot more appealing lately as they begin to promise longer battery life, better performance, and continue to come in at surprisingly low prices. And this week, Chromebooks got even more exciting with the announcement of the Acer C720P. The C720P may be the second touchscreen Chromebook, but it's a full $1,000 less expensive than the first one. To see just what the latest batch of Chromebooks has to offer, we're taking a look across four of them to see which delivers the most value for its price. 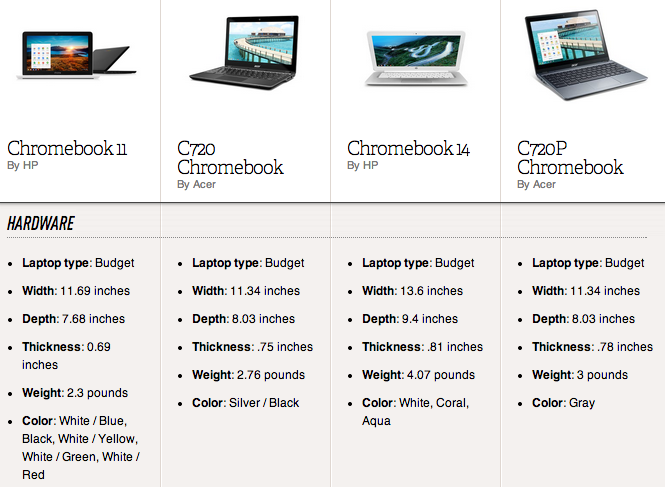 Click above for full specs on all four Chromebooks.

Acer's C720P Chromebook is certainly the most exciting of the four recent machines. For those interested, its touchscreen gives it a clear edge over competitors — and without raising the price by much. For now though, Chrome OS isn't particularly well tailored to touchscreen use, so the C720P may not be the best way to spend your money. On the other hand, if touch input is something you've come to expect because of Windows 8 machines or even just your cellphone, it's hard to pass up the C720P, which has some of the best Chromebook specs around and costs under $300.

The C720P's biggest price competition actually comes from Acer itself: if you're looking for the least expensive of the recent Chromebooks, that would be a stripped-down version of the C720, which is almost identical to the C720P but lacks a touchscreen. For $199.99, you can get nearly the same specs as the C720P with a major discount. Both include an 11.6-inch display at 1366 x 768, a processor from Intel's Haswell family, and 2BG of RAM. The only other big differentiator is that the C720P includes an SSD with twice as much storage — 32GB — though both include 100GB of Google Drive space to make up for that low total anyway.

The other recent Chromebooks come from HP, but they're hit-and-miss. The Chromebook 11 is stylish, but it's the only recent Chromebook not running on a Haswell processor — a major disadvantage when it comes to balancing battery life and power. More importantly, it actually isn't on sale at the moment because of overheating issues, which is a fairly good reason to overlook it for now. We found its performance a little bit limiting anyway.

That leaves HP's Chromebook 14, which is arguably the most stylish machine with its bright red and blue color options. It has specs to match Acer's newest offerings, and it has the largest display of the bunch, at 14 inches. Unfortunately, that'll give it the lowest pixel density of the group, but then it's also only $299, so you can only expect so much. The extra size means extra weight too — over a pound more — which makes the Chromebook 14 yet a bit less appealing for anyone really on the go.

Both the good and the bad news is that the specs on most of these Chromebooks are incredibly similar — often almost identical. That should let you make a decision based on small differences in pricing or just your preference in style without having to worry about making major tradeoffs when moving from one to the next. None of the options appear to be perfect just yet, but for machines that cost less than $300, they're getting closer than most probably imagined they would.

Most companies seem to have taken a break for the holiday, but there were still a couple new products added to the database this week:

If you want to learn more about any of the products mentioned above, all of our information on them can be found through the database box located beneath the article. For more on laptops, cameras, and just about every product around, you can check out the full Verge Database right here.