Nobody seems to much care about hard drives anymore. Whereas we previously waited anxiously for the next doubling in capacity, modern cloud storage and flash memory have turned the old trusty HDD into a neglected backup artist. And yet, all those photos and videos you upload to "the cloud" actually end up on a storage drive somewhere — and it's those massive data farms that stand to benefit from Western Digital subsidiary HGST's latest breakthrough in storage density.

This time the innovation isn't about how many bits can be squeezed onto a given surface area but about the physics of the drive's operation. By filling the drive enclosure with helium gas, HGST claims to have reduced drag inside its typical HDD to the point where it can add more platters inside the same space. Where it once could only fit five, it can now cram in seven separate disks, resulting in single-drive capacities of up to 6TB.

HGST fits 6 terabytes inside the space of a regular 3.5-inch drive

Targeting the enterprise sector, HGST's new hermetically sealed drives are already being tested by big storage operators. HP, Huawei, CERN, and Netflix — which recently started trialing 4K video streaming — have all been named as potential customers. HGST is starting to ship out the helium-filled Ultrastar He6 today, touting its best-in-class power and space efficiency plus reduced total cost of ownership. And, because they're airtight, the new disk drives are also suitable for use in immersion-cooled data centers. Taken all together, these improvements could well foreshadow even larger free storage offers than Flickr's groundbreaking 1TB. 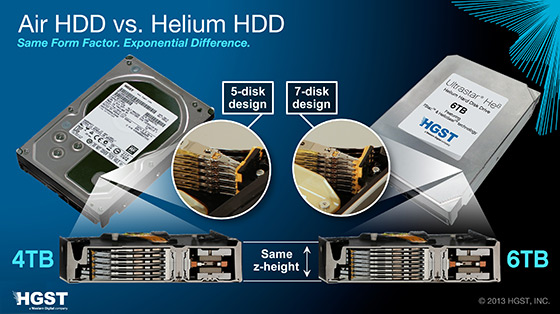