The Alpha 7 cameras that Sony introduced last month were astounding because of their combination of compact size, a full-frame sensor, and interchangeable lenses. The only apparent problem they had was the lack of an established lens ecosystem — such as, for example, the one that Nikon has with its historically excellent Nikkor full-frame lenses.

Somebody in Tokyo was evidently paying attention, however, as Nikon Rumors has gotten ahold of images and specs of a purported new Nikon Df shooter. It carries the FX label that designates Nikon's full-frame cameras, and it is compatible with the company's standard F-mount, but it looks smaller and far prettier than any other DSLR that matches those criteria. And yes, the rumors point to a pentaprism-equipped camera, not a mirrorless shooter as Sony and many others are transitioning to. 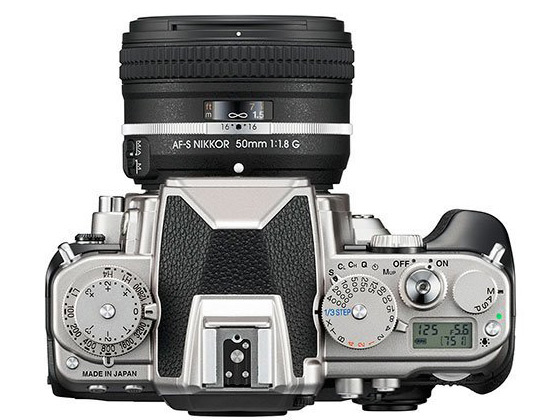 Styled to look as retro as possible, with its panoply of buttons and dials, the Nikon Df retains some aspects of the modern control schemes Nikon has been implementing lately. The throwback look mixed in with the modern internals would seem to be what underlies the "Digital Fusion" branding mentioned by Nikon Rumors. Other notes of import include the camera's weight, a mighty 765g, and its apparent lack of any video recording options. Nikon is expected to be making the Df official imminently, so stay tuned for the all-important price and availability.

Update: Amazon seems to have briefly posted its listing early, giving Petapixel a quick look at the pricing. According to the screenshot, the Nikon Df has a hefty list price of $2,749.95, and Petapixel says it also confirms the specs that were previously leaked.