Share All sharing options for: Nikon's full-frame Df: a modern camera in a stunning old-school body, all for $2,999.95

Nikon's latest camera isn't "retro," I'm told. It's "classic." Whatever the proper description, the new Nikon Df is an incredibly beautiful DSLR, a full-frame camera in a 1.6-pound body much smaller than your average professional shooter. Leather and chrome, and absolutely covered in dials and switches, it's a nod to Nikon's F decades-old series of film cameras. And the design is very much the point: "we have a camera," Nikon's Mark Soares says, "that's going to make you go 'holy moly, that's a film camera.'"

At the same time, Soares tells me, "the engineers held nothing back." That led Nikon to build a slightly larger camera — 5.6 x 4.3 x 2.6 inches — than something like Sony's Alpha 7, but one loaded with high-end technology. It has the same 16.2-megapixel, FX-format CMOS sensor as Nikon's pro-focused D4, and the company's latest Expeed 3 processor. It has ISO range up to 12,800 and expandable to ISO 204,800 – "the ISO dial is the largest dial on the camera," Soares says, "because there's so much to account for."

It can capture 5.5 frames per second, lets you shoot them through an optical viewfinder with 100 percent field of view (that pentaprism hump isn't just for show), and displays its shots on a 3.2-inch LCD filled with 921,000 dots. There are plenty of shooting modes and scenes, and compatibility with Nikon's WU-1a wireless adapter if you can't wait to share your photos. Fully compatible with Nikon's huge range of full-frame F-mount Nikkor lenses, the Df's photography pedigree is spectacular. 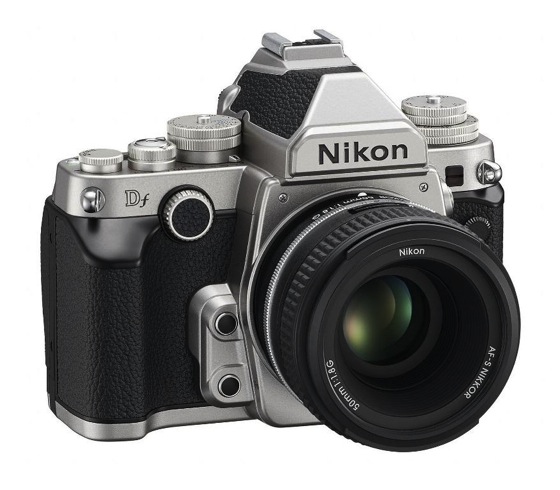 One thing noticeably missing? Video. The Df simply doesn't support video recording. Soares says this was partly an engineering decision — the Df uses a smaller battery, in the interest of space, and it would die in a hurry while shooting video — and partly just a reflection of Nikon's focus on still photography with the Df. The Df is one of the smaller, more compact and portable full-frame cameras we've seen, but without video support it's not exactly practical for most people.

At $2,999.99 for the body and a new 50mm f/1.8G lens, the Df was never intended to be practical anyway. (It's $2,749.95 body-only, and the lens itself is $279.95.) It's a spectacularly high-end camera designed for professional photographers looking for a more portable supplement to (or replacement for) their D4, or for those with a wicked case of film-era nostalgia. Like the best cameras we've seen from Fujifilm and Olympus, it marries classic looks with updated performance, and if you've got the cash to burn the Df is nothing if not a scene-stealer.