Target will buy your first-generation iPad for $200

Target will buy your first-generation iPad for $200

It might finally be time to retire your first-generation iPad — you're now behind by two versions of iOS, after all, as all original iPads max out at iOS 5.1.1. And a new promotion should make it a bit easier to part with the tablet. Target's offering at least a $200 gift card for all iPad trade-ins now through November 9th at brick-and-mortar locations. That's far more than what an original iPad is worth, and so long as there are no scratches on the screen and you can turn on the tablet you're eligible for the offer. The deal might also be worth it if you have an iPad 2 (we hope you didn't just buy one of the geriatric tablets, which Apple still sells new), though you might want to shop around for other offers. 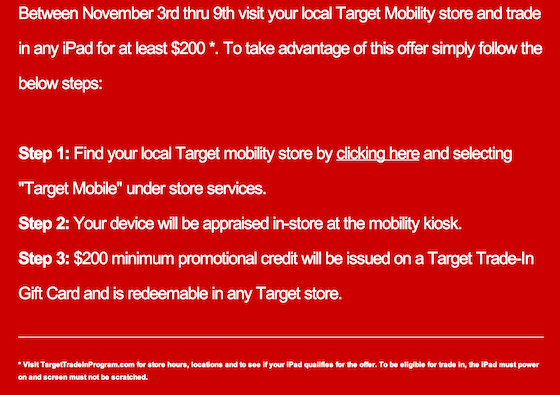