What's the cheapest way to get HBO and internet in America?

Cord cutters have nothing but bad options

Share All sharing options for: What's the cheapest way to get HBO and internet in America?

Comcast — the largest cable operator in the US — made quite a few headlines when it recently made a surprising gesture to cord cutters. It introduced a package called Internet Plus, which offers 25 / 5 Mbps internet as well as access to HBO and roughly 10 local channels for a promotional rate of $39.99 per month. The plan also includes Comcast’s own streaming video service Streampix and, most importantly, HBO Go, which lets you stream almost anything from the premium channel’s incredible stable of content.

I called up a Comcast sales rep to shop around for services in San Francisco and try to lock down a real-world price for a customer looking for just HBO and internet access. After hearing me out, the rep told me, "I have some great packages that are geared towards the internet-only person." He then proceeded to direct me towards a $79.99-per-month plan with close to 50 cable channels. After confirming that the only channels I needed were HBO’s, the rep said that "we’ve got a newer package that they just released ... I’m trying to remember exactly the name of it." Either he didn’t know much about the Internet Plus package, or he wasn’t interested in selling it to me. Ultimately, I found the $39.99 rate isn’t quite it’s all cracked up to be. You’ll need to pay $10 more per month to get HD service. A modem for internet costs $7 per month on top of that, and the price of the service itself jumps up to $69.99 after the first year — and that’s not including hidden fees and taxes.

"I have some great packages that are geared towards the internet-only person."

Even if Internet Plus isn't that cheap, it's an appealing package for cord cutters. Those who ditch cable have more options now than ever before in the US thanks to streaming services like Netflix, Hulu, Vudu, and YouTube, à la carte options like iTunes and Amazon Instant Video, live sports from MLB.tv and NBA Gamepass, and free broadcast television. But there is some content that remains stubbornly tied to costly cable TV, perhaps the most notable of which is HBO. Game of Thrones, Girls, Boardwalk Empire, The Newsroom, Veep, and more remain largely under lock and key if you’re a cord cutter. Short of piracy or borrowing someone's HBO Go account, a plan like Internet Plus is your only option if you want HBO and internet without the costly cable bundle.

There have been some murmurs of an internet-only HBO subscription, but until that day finally arrives, we're stuck with cable companies. So we decided to take a snapshot of the cheapest way Americans with different cable operators in nearly a dozen cities across the country can get internet access and HBO.

"How much does it cost?" is a difficult question to answer

Trying to track down prices is an incredibly messy and complicated business: operators obfuscate the options available to customers and add in numerous hidden fees. Pricing differs in every region, and it can vary based on your credit score and other factors. Even when you finally do nail down a price, companies ensure that the monthly rate isn’t valid for long: prices change frequently and there’s a maze of promotions and discounts to navigate. Put simply, cable operators carefully control how much information they give customers — probably to make it easier to saddle them with plans they don’t really need.

For the purposes of this article, then, the prices quoted are intended to provide an idea of what cable companies across the country are offering customers who are looking for internet access and HBO. Hardware rental fees — the monthly rate many companies charge for cable boxes and modems — are noted, but costly installation and activation fees, taxes, and other hidden costs aren’t included, as they vary wildly from location to location. Note that if you're truly a cord cutter and all you want is access to the HBO Go streaming service, you could opt to not pay the cable box rental fee and just watch content on your computer. 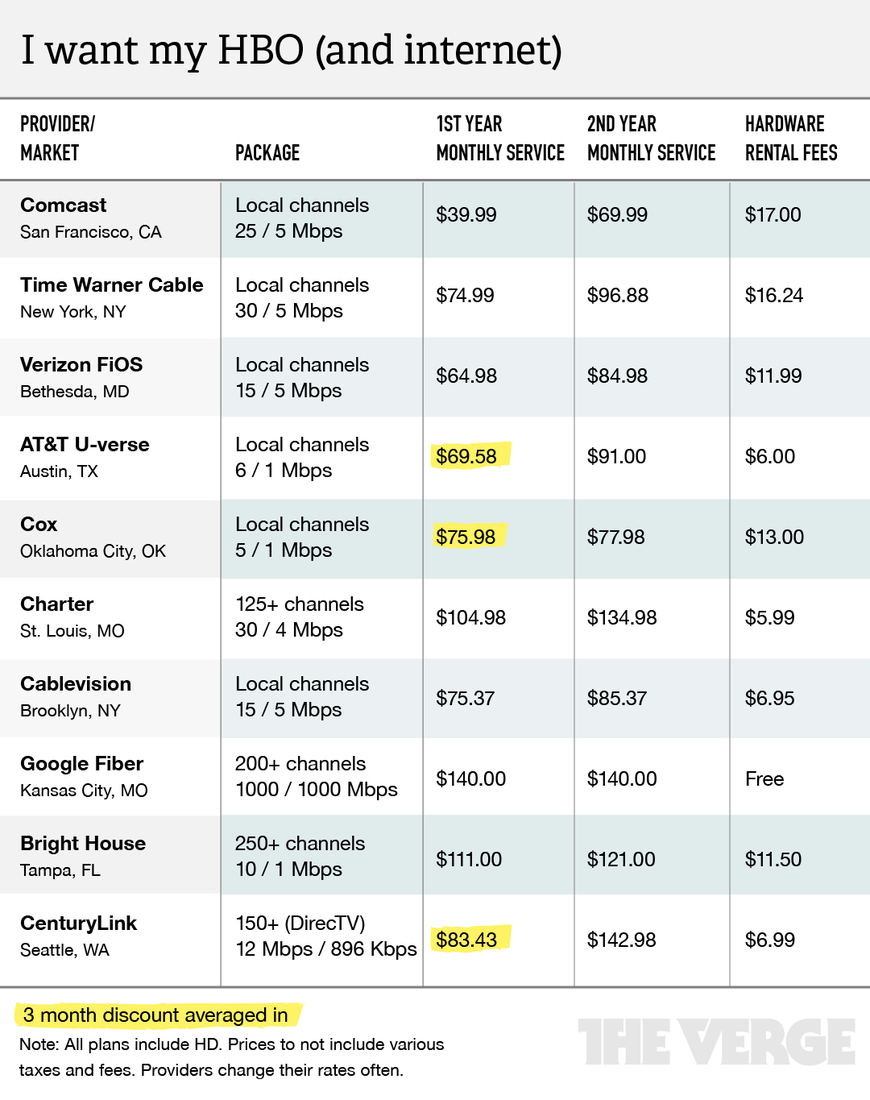 After many lengthy conversations with almost a dozen sales reps from cable companies around the country, it turns out the Comcast package is just about the best choice you have for an HBO plus internet bundle — if you can get it. Perhaps surprisingly, a number of other operators offer similar services for a comparable rate to Comcast’s Internet Plus bundle (ignoring the one-year promo). I was able to find similar plans from Time Warner Cable, Verizon FiOS, Cablevision, Cox, and AT&T U-verse, but often such a limited plan is not marketed as a pre-made bundle: you’ll have to make a special à la carte package to make it work. Worse, sales reps made finding such inexpensive bundles quite difficult, as many are paid on commission.

While shopping for FiOS service in Bethesda, Maryland, for instance, a rep asked me a number of questions to pin down what I was looking for. He ultimately offered me with a package with over 110 channels and 75 / 35 Mbps internet for north of $100 per month. Only after pressing for far less did he mention that I could drop the internet speed to a 15 / 5 Mbps service — though he strongly (and preposterously) warned me that "I don’t really recommend slower than 75 megs to stream video."

"I don’t really recommend slower than 75 megs to stream video."

The worst experience, undoubtedly, was with a sales rep from AT&T U-verse. It took over an hour to nail down a price for service in Austin, Texas, during which time I had to do a credit check and set up an account to get a real price. We went through a number of different bundles, each time with the rep including services that I hadn’t asked for. At one point she said, "I know you said you weren’t interested in a telephone, but I want to see what it would come to … it only has 250 minutes so you wouldn’t really have to use it." The true price of each different bundle was hidden by three month and six month promo offers. By the time I hacked down the service to just what I had asked for — internet, local channels, and HBO — she warned me that "at the very bottom your fees start to stack up." I wasn’t too surprised by the $15-per-month fee for the cable box that wasn’t charged with larger plans, but the $297 installation fee — nearly $225 more than I was quoted for a larger bundle — was breathtaking. If you can swallow that pill, I found a plan that cost an average of $69.58 per month for the first year. I could have saved $5 by opting for slower internet, but the dismal 6 / 1 Mbps speed I selected was already pushing it.

These companies, at least, did offer very basic plans that could have HBO service tacked onto them for a fairly reasonable rate. The best that others like Charter, Bright House, CenturyLink, and even Google Fiber could offer were old-school cable bundles with well over 100 channels and $100-plus price tags. (Google Fiber, it must be noted, is brand new, and only offers one plan with television service. It also includes gigabit internet access, though there's no HBO Go service at this time.)

"The cost gets lower when you get three [services] as opposed to two."

When services are bundled in costly packages, you often hear statements like "the cost gets lower when you get three [services] as opposed to two." That’s what a sales rep from Charter told me when I was pricing service in St. Louis, Missouri. When I protested the inclusion of home phone in the bundle she put together, she explained that "the phone is going to save you money because it saves you taxes and the promotion is longer." Despite the $5-per-month difference for phone service, she insisted that I’d pay less in taxes. The best plan I could find cost $104.98 per month for the first year before ballooning to $135.98. At least she offered a plan without phone service — the same can’t be said for the rep from Bright House, who put together a promo rate of $111 per month in Tampa, Florida for phone, internet, and TV.

So what can be gleaned from this look at cable-company pricing schemes? It’s striking just how expensive all of these plans are. Even the best options like the new Internet Plus bundle from Comcast are incredibly costly — especially once the promo rate ends. Take into account that the local channels included in many of these bundles are available entirely for free (in HD) via over-the-air broadcast, and the prices are particularly ludicrous. Comcast’s typical rate for its 25 / 5 Mbps internet alone is around $45 per month, about half the cost of adding local channels and HBO service. Another plan with the same internet, over 80 cable channels (including ESPN), and HBO costs just about $100 per month, hardly any more than the Internet Plus bundle. No matter what you do, you’ll be paying close to $100 a month.

So while Comcast’s new plan might be a sign that cable companies are actually aware of what their customers want, it doesn’t mean that they’re overhauling their business practices. The Internet Plus package, after all, is just a new branding scheme coupled with a promotion: since 1992 cable companies have been mandated by the FCC to let customers with the lowest tier of TV service sign up for à la carte channels like HBO. Ultimately, then, this all means that there is still a huge place for something like a cable-free subscription to HBO, if executives can be convinced that offering such a service is in their best interest. Until then, you’ll probably just want to continue borrowing your aunt’s HBO Go account.