When you're redesigning the Like button, which appears on over 7.5 million websites, the details count. Every pixel you change, color you swap, and drop-shadow you alter will get seen 22 billion times per day, Facebook says. So, the company hasn't bothered much with rethinking the look of the Like button since it launched in 2010. Back then, even Facebook itself couldn't have predicted the scale the Like button would reach. Its presence is almost guaranteed on most websites, and it's considered "one of Facebook's most valuable brand assets," product manager Ling Bao says.

"Getting a design that works across all these websites at different scales and in different browsers is quite a herculean task."

Today, Facebook is debuting a new version of the Like button, a vibrant blue design with Helvetica type that makes its previous version (pictured below) look old and pale. Perhaps more importantly, Facebook killed its signature "thumbs up" symbol in favor of a Facebook "F" and the word "Like," which appear on every one of various button layouts you can choose. Giving the button a fresh coat of paint is easier said than done, however. "It's not easy designing a button used by the whole internet," Bao says. "This product has a lot of unique constraints, and is used by so many sites in different contexts." 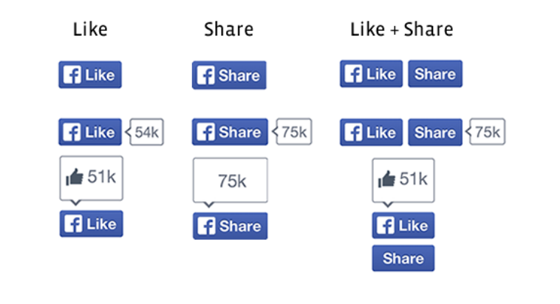 One such constraint is that the Like button is used by an incredible variety of browsers — both new ones and old ones, Bao says. "Like" needs to translate to hundreds of languages without breaking the button or spilling onto the next line. "'They're just buttons, why did it take so long?' you ask, but getting a design that works across all these websites at different scales and in different browsers is quite a herculean task," he says. Not only that, but Bao needed to get the design approved from the company's designers, vice presidents, legal team, and even CEO Mark Zuckerberg himself. The entire effort took about six months from beginning to end.

Aside from design, Facebook is also pairing its Like and Share buttons in hopes that websites will include both. Most people might not know the difference between them, but Bao emphasizes that there's a distinction. The Like button instantly posts content to Facebook, while the Share button lets you add a comment before posting, or lets you share the content in a specific place like a private message. In Facebook's tests, the new buttons got clicked more often than the old ones, possibly because they're a bolder, more visible color. As the web gets flooded with more ways to share links, it turns out even one of the most popular websites in the world still needs to stand out.