SDK 2.0 could open the floodgates for smartwatch app development

The Pebble might be our favorite smartwatch at the moment, but it's still a hassle to use. Setting up notifications is a pain, particularly on iOS, and there's just not a lot the Pebble can do. Thankfully, it looks like all of that is about to change.

Starting today, Pebble natively supports iOS 7's Notification Center — after a firmware update for the watch, every iOS notification should just work. The company has just announced SDK 2.0, which adds key features and fixes to make app development easier. And if you need a vote of confidence that the platform still has potential, talk to Foursquare, GoPro, iControl, and Yelp. Each is partnering with Pebble to develop high-profile apps of their own.

iOS 7's improved Bluetooth communication was clearly designed with smartwatches in mind, and Pebble's taking full advantage of that. There's no need to wait nine minutes to read new Gmail messages anymore: any notification your iPhone receives will automatically get passed along to the Pebble. If there's any issue with the system, it's that it's actually sharing too much and too often right now: Pebble notes that some iOS apps are sending duplicate notifications, particularly when the phone gets disconnected. The company's already working on a solution.

Check in from your smartwatch

Pebble founder Eric Migicovsky says the company has a number of big-name partners lined up, but there are just a few the company can share today. You'll soon be able to check in on Foursquare from your watch, and Yelp will show you a list of recommended places nearby right from your wrist. Shake the watch and Yelp can pick one at random for you. With GoPro's latest Wi-Fi enabled action-cameras and the appropriate smartphone app, you'll be able to stop and start recordings from the Pebble, change resolution and framerate, and activate multiple cameras simultaneously (unfortunately, there's no live preview). Last but not least, iControl will let you exert influence over its home-automation platform. The apps aren't ready yet, but Pebble hopes to ship them alongside the final SDK 2.0 by the end of the year. 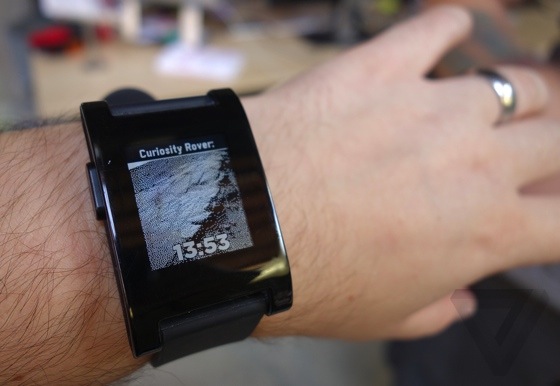 There's a lot to unpack in Pebble's new Software Development Kit, but one key takeaway is this: Pebble could soon replace your fitness tracker. With a new accelerometer API, developers can read the raw motion-data in real time and use algorithms to determine how you move, and with a new data-spooling feature, the watch can store a couple hours of real-time accelerometer data even if the Pebble disconnects from the phone. It uses a little more battery, but the team projects the Pebble could still last a full day of Fitbit-like use. The Pebble also now recognizes a dedicated "accelerometer tap" gesture, giving app developers a new virtual button to work with beyond the four physical ones.

Javascript is a big deal for Pebble

Perhaps just as importantly, the crazy hacks app developers needed to use to let Pebble access web resources are going away. One of the coolest apps on Pebble is Glance, which can pull down local weather data, email, SMS, and calendar appointments, but requires developers to create a dedicated server app on the phone to request that data and pass it to your wrist, one which users need to keep running in the background. With Pebble's new Javascript API, the Pebble app itself can serve up all of those requests, dramatically lowering the barrier to entry for doing awesome things and doing them in a platform-agnostic way. You can see one of the results above: a NASA Jet Propulsion Lab engineer whipped up an app that can show you the view from the Mars Curiosity Rover's camera.

Other notable features of SDK 2.0 include two-way Bluetooth communication, so both the watch and phone know when they're connected, as well as persistent storage space for each app. Pebble says it could store high scores or settings. 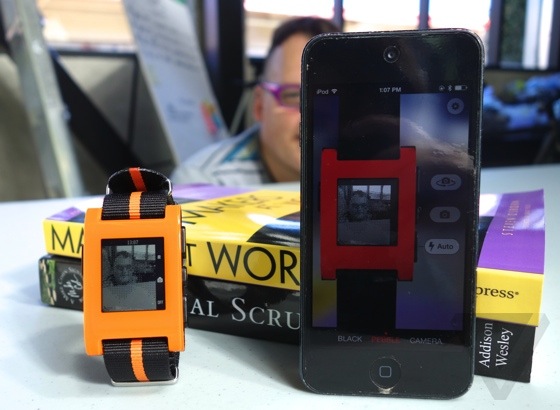 Pebble founder Eric Migicovsky says there are over 190,000 of the company's smartwatches on peoples' wrists today, and that the Samsung Galaxy Gear only further helped spur Pebble adoption. The company won't talk about future hardware yet. The next step, Migicovsky says, is to eliminate the barriers to entry to download apps — and that will look like a Pebble app store.

"No one's really launched a wearable app store yet."

"No one's really launched a wearable app store yet ... we're going to take that problem, and we're going to solve it," he says. We don't have any more details yet — Pebble's still hammering them out — but Migicovsky says the store will likely live on your smartphone, rather than the Pebble itself, and paid apps will play a big role. The company wants to figure out a viable incentive model where developers can make money from their work.

The Pebble has a long, hard road ahead of it, even if it's out in front of the smartwatch pack. We're eager to see if an influx of apps can help the tiny 40-employee company stay ahead of Google and Apple.