Minting Cash: how Square designed a product with no design at all

Is the best interface no interface?

Share All sharing options for: Minting Cash: how Square designed a product with no design at all

Robert Andersen was feeling flustered. Square founder Jack Dorsey had asked him to design a product that was so simple, it wouldn’t even have an interface. "Square Cash" would let people send money over email. Andersen had previously designed email receipts for Square’s array of business products, but had never designed a product built on email and email alone. Dorsey took a look at Andersen’s initial designs and asked for a do-over. "You know what, go to the MoMA," Dorsey quipped. Andersen dropped what he was doing and walked a few blocks to the museum.

As he wandered from room to room, he stumbled upon "The Occupation," a surrealist oil painting of soldiers on a city street by artist Mark Tansey. The painting was detailed but monochromatic, and completely washed over with red, as he describes it. Andersen paused, but then rushed back to the office, along the way shooting some video on the street using his iPhone. Once back at his computer, he applied a colored filter to the footage and showed it to Dorsey. "Yep, that’s great," Jack told him. "I love it." 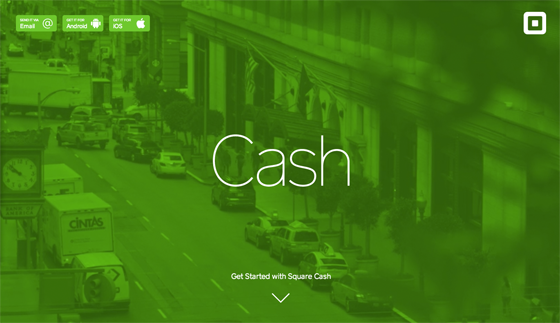 Andersen is Square’s creative director — employee number four of a team that now numbers over 600. He first met Dorsey in 2008, when his PocketTweets web app for iPhone caught the attention of the Twitter co-founder. Some time later, Dorsey gave Andersen one of the first peeks at his new product, Square, and hired him to helm the company’s design team. The duo have since worked together on everything from the original Square device (which was once called Squirrel) to Square Register and now Square Cash. But whereas Square’s products up to this point had been made of plastic, or coded into an app, Square Cash would be neither. At first, Andersen thought Dorsey was crazy.

"Jack is very much into how can you take something and simplify it down to its essence."

"What if you could send money to people over email?" Dorsey asked him in January of this year. "Jack is very much into how can you take something and simplify it down to its essence. This is a very Jack and a very Square idea," Andersen says. But why email, an age-old medium people decry on a daily basis, and why "cash," a metaphor that is quickly losing value? At Square, Andersen says, the goal is not necessarily to supplant the tools we use on a daily basis, but to make them more useful. The original Square device, for example, didn’t bundle in NFC for wireless payments, but instead made accepting credit cards easier. This approach — to augment and reshape our current technology rather than replace it, has thus far been working for Square. 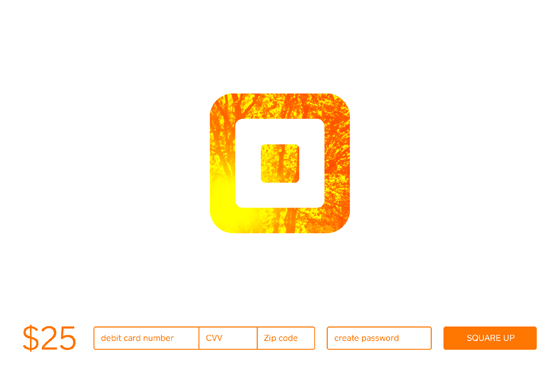 An early mock-up of the Square Cash onboarding experience.

The principle of Square Cash was exciting to Andersen, but also intimidating. "Very few relevant companies have ever built a product this immersive on top of email," he says. "It was something we didn’t know how to do, so you start getting paranoid about whether it’s the right decision." The first step was drawing up a prototype within the company to let employees send money to each other. "There was no front-end UI — it was all email-based," says Andersen. "It was really flat, and a little bit boring." Most importantly, you had to set up your email and debit card using the site before you could send money, as with most payment apps like Venmo. After months of testing, they decided to reverse the process. Instead of having to sign up, like you do with most apps and services, you start using it by sending an email and cc’ing Square.

One of Dorsey’s most critical directives during the process was that users shouldn’t have to come up with new usernames and passwords, because in real life, you don’t need a password to hand some money to a friend. Considering Dorsey’s obsession with emulating the "real life" transaction and short-form messaging, it’s almost a wonder that he didn’t push for SMS as the carrier for Cash. Instead he chose email, a clumsy and slow communication medium that everybody loves to hate. "Email is a really interesting platform because it’s so ubiquitous," says Andersen. "We each have an email app on our phone, and we all have email apps in the browser." In other words, you don’t need to download an app to use Square Cash, because you already have the app, and most importantly, you already know to use it. "We wanted to create the lowest common denominator way to use the service," Andersen says, "because even downloading an app is enough friction that some people won’t do it." 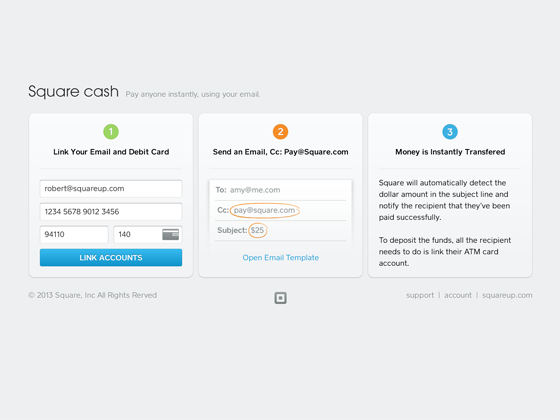 Another early mock-up of the Square Cash onboarding experience.

Yet, as ostensibly simple as Square Cash is, there will be users who mistype or misremember who they’re supposed to cc in the email. Perhaps some of Square’s employees will still mess up the process — during its beta period, you were supposed to cc pay@square.com, not cash@square.com, what the company settled on for launch. So, Square made its own iPhone and Android app to help out, even though it seemed determined to build an "email-only" experience from beginning to end. However, the app serves little purpose other than to remind you how to use the service.

The first time you open the app, it doesn’t ask you for a username, or to sign in using Facebook or Twitter. It just shows a big number pad where you can type in a dollar amount, and then pops up an empty email window with cash@square.com already filled into the cc field. "We like the idea of you creating this thing you’re about to send someone else," Andersen says. "You’re crafting the cash amount first, and then deciding who to send it to." In a way, the app points out one of Square Cash’s most interesting features — the way it leverages not your social graph, like Facebook, but your "email graph," as Andersen describes it. There are no friends to add, since your email app likely includes the addresses of your friends and family members. "Everyone has a smartphone, everyone has a debit card, everyone has an email. All we’re doing is creating a wrapper of an app that makes using those things as simple as possible." But for younger people, who are increasingly tethered to chat apps like Facebook Messenger and Snapchat instead of email, converting them to Square Cash could prove more challenging. 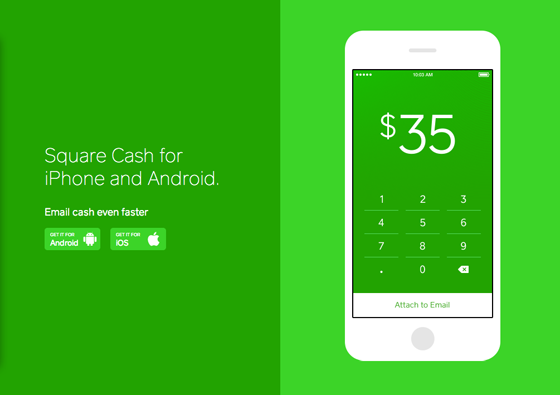 "Jack knows best" is a line you might hear around the Square office, but not in the sense you might think. Dorsey is made out to be a deity of sorts when you talk to observers or employees alike, but he isn’t made out to be a dictator. Andersen says that Dorsey's only mandate to his "Squares," as employees are called, is to constantly question their assumptions. Just like the original Square app, Square Cash went through four redesigns," Andersen says. "Over nine months, you become blind to the details, and whether or not something is good or bad," he says. "It’s hard to clean up your perspective on what you’re working on." Dorsey often steps in to offer a fresh take, and then bows out gracefully. A few weeks before launch, for example, the Cash website and emails were dressed in teal. "We all loved the color," says Andersen, "but Jack walked in and said ‘This color is drab.’"

He asked for something more fun and energetic. A few iterations later, the enigmatic Dorsey and company settled on a bright lime green.

But don’t give all the credit to Dorsey. Andersen invented the @ reply on Twitter, after all, and has shown an aptitude for executing on the maxims that fly out of Dorsey’s mouth, seemingly on a daily basis, (like "What if you could pay a friend with email?"), which are much easier said than done. "It’s kind of like a puzzle," Andersen says, "or it’s more like Algebra. You know what the answer is, so all you need to do is define the variables in order to get at the answer."