Wild skies: how long will drones for hire fly in a legal limbo?

Wild skies: how long will drones for hire fly in a legal limbo?

The FAA has two years to address safety and privacy concerns

Update: Today, the FAA published an expected road map for its UAV deployment. By the end of 2014, the agency hopes to have a certification process for existing aircraft largely in place; it should also have published certification guidelines for pilots. After the rules for small unmanned aircraft are codified in 2015, the FAA will continue to work on rules for other craft until 2020.

It was late September, and a 3-pound drone was soaring over Midtown Manhattan. But as it headed around a skyscraper, the pilot apparently misjudged the distance: the craft smashed into the side of the building, falling dozens of stories to the streets below and almost hitting a pedestrian. The month before, a similar camera-equipped unmanned aerial vehicle (UAV) tumbled into spectators as it filmed a Virginia bull run. And in July, the crash of an unmanned, retrofitted F-4 fighter temporarily shut down part of Florida’s highway 98. None of the incidents caused lasting damage or injury, but they all highlight a growing question: how will the FAA set the bar for safety when it opens the skies to commercial drones?

The word "drone" evokes the Reapers and Predators used by the military abroad, but back inside the US, it’s more likely to refer to small craft equipped with cameras and imaging sensors or hobbyist quadcopters flown for fun. Chris Anderson of drone company 3D Robotics has estimated that there are already thousands of these unmanned devices in the air, where they can generally fly below 400 feet away from populated areas with no need for a license or permit. But once you want to do more than send up an unmanned plane for your own enjoyment, things get more complicated.

With a few exceptions, 'drones for hire' are still illegal

Government agencies, fire departments, some universities, and other public institutions can get case-by-case authorization to operate, which is why you see mosquito control groups looking for breeding sites with the Condor Aerial Maveric or police using drones in search-and-rescue missions. Commercial operators, though, need to apply for a limited experimental license in order to fly legally. This summer, the FAA certified two models of small UAV for commercial use, but most "drones for hire" are still illegal, even if their operators are rarely penalized.

The FAA has been working to change that with the small UAS [unmanned aircraft system] rule, which covers any craft under 55 pounds — the "systems" designation is used to connote a complex combination of ground control, aircraft, and data link rather than the "vehicle" in "UAV." Progress, however, has been slow. Currently, the FAA is expected to release a draft by the end of 2013; the guidelines were originally due in December of 2011, and what exactly they’ll entail isn’t clear. Ray Young, who sits on a federal UAS advisory committee run by industry group RTCA, puts it bluntly: "We don’t know what’s in them."

"It’s not even on the FAA’s radar right now."

Besides straightforward safety issues, the FAA will have to deal with the privacy concerns raised by a cheap, widespread technology that lowers the barrier to launching a high-flying mobile camera. Few people would object to search-and-rescue missions, but things like the "inevitable" surveillance drones outgoing mayor Michael Bloomberg has predicted over New York are a different story. Senator Ed Markey (D-MA) has brought a bill that would make the FAA build anti-surveillance protections into its rules, but right now, it’s not clear exactly who is responsible: the FAA has generally stayed out of privacy questions, and other agencies haven’t stepped up to the plate.

Missy Cummings of MIT’s Aeronautics and Astronautics Department predicts that states will end up adopting a patchwork of rules, especially while the question of small UAVs flying over state lines is fairly remote. And although one of the biggest concerns has been police spying, the FAA’s current rulemaking isn’t aimed at reining in public services.

While low-flying security cameras remain a hot issue, Young’s committee is working at the other end of the spectrum: larger UAVs that can fly at the very upper end of usable airspace. Medium or large unmanned aircraft could carry water for firefighters, transport cargo, or sit in the air as flying cellphone towers — and with a real legal framework, Young thinks the US could see a new wave of civilian drones. But that framework won’t be coming anytime soon. Congress only stipulated that the FAA make rules for small UAVs by 2015. Anything larger will be integrated in the years afterwards, and more rules could take until 2020 to release. "There is no mandate for the FAA to integrate medium- to large-sized UAVs," says Cummings. "It’s not even on the FAA’s radar right now." 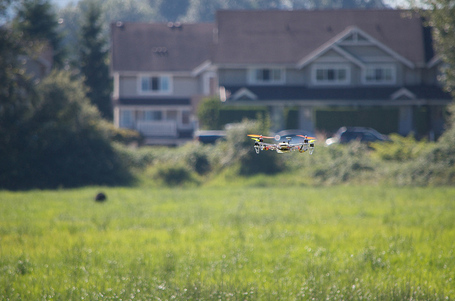 Cummings and Young say that as military drones have matured, early safety concerns have faded. A 2012 Bloomberg Businessweek analysis found a far higher crash rate for military UAVs than for manned aircraft, and some local governments have asked the US military to move airstrips away from civilian runways because of downed drones. But Bloomberg’s worst rates were averages of the past two decades of flying, something Cummings says is "effectively the same thing as looking at the aircraft industry’s accident rate in the 1930s." When Bloomberg examined data from the year 2011, the Predator’s accident rate was similar to the F-16 fighter jet’s at the same point in its lifespan — roughly 15 years.

The problem, Cummings says, is that the FAA hasn’t said much about the standard for domestic aircraft. "If we know right now that UAVs are safer than general aviation, then why isn’t that the bar? Or should the bar be the same as commercial cargo? The FAA needs to set that bar," she says. "We know that they need to be safe, but nobody will define what safe actually means in terms of hard numbers." And right now, almost all crash data is based on military craft. "There’s no published data on small UAV safety," she says. "There’s no reporting mechanism — even if people wanted to report crashes or accidents, there’s no way to do it."

But it helps that many unmanned aircraft won’t be flying over cities or even lightly populated areas. Andrea Bianchi of NUAIR — an organization created to help build drone test-sites in the northeastern US — believes that the future lies in agriculture. "That’s going to be about half of the civilian market," she says, and she’s far from alone. Low-flying machines are already taking over crop-dusting duties, and higher-flying ones can use infrared sensors to figure out where irrigation water is going. It doesn’t erase privacy or safety concerns, but it mitigates potential hazards.

Most crash data is still drawn from large military craft

If the safety standards are ambiguous, the requirements for pilots are just as muddy. Since hobbyists don’t need any formal training and licenses are issued on a case-by-case basis, there aren’t any real guidelines for what it takes to safely operate a drone. The FAA has generally kept mum so far, but Cummings worries it could make rules without accounting for the difference between manned and unmanned aircraft pilots. "If the FAA insists that you be a general aviation pilot and get the same training, that’s a problem, because flying a drone is actually more like being an air traffic controller," she says. "It’s not clear that they even recognize that there’s a different skill set involved between being a pilot and being a drone operator."

UAVs won’t just have to comply with the FAA’s guidelines. They’ll also need to convince everyone from legislators to insurers that they’re safe. Vikki Stone, vice president of insurance company Poms & Associates, says companies like hers are still figuring out how to deal with the differences between drones and their manned counterparts — and unlike hobbyists, companies will have to hammer out a deal with them. "It’s our expectation that the insurance industry might have even stricter guidelines than what [the FAA] might have, she says. 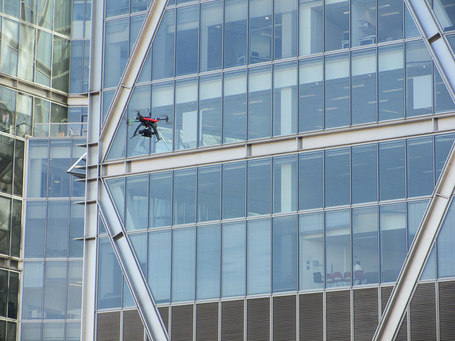 With UAVs still relatively new, local governments are also figuring out where to draw the line. Military systems like ARGUS, which can watch miles of space at a time with its 1.8-gigapixel camera, have raised fears that a green light for civilian drones is a green light for mass surveillance, even if most UAV technology is far more prosaic. Several municipalities have considered banning them outright; Charlottesville, Virginia became the first to do so early this year. Virginia’s state legislature later passed a two-year moratorium on unmanned surveillance aircraft, but the state appears to still be figuring out what that means. Governor Bob McDonnell quickly softened the ban to allow things like search-and-rescue missions, and despite its misgivings, Virginia is bidding for one of the FAA’s drone test sites to be co-managed by Virginia Tech.

Bianchi hopes that some worries are just the growing pains of a nascent industry. "We’ve seen this all over the country in the past year: there’s been a lot more conversation; there’s been a lot more media coverage of civil and commercial drone use especially," she says. "It’s definitely a natural response." For now, NUAIR and others are trying to allay fears through publicity and education campaigns. "A lot of regular civilians aren’t very familiar with this technology, even though it’s starting to grow at a hobbyist user level," she says. "A lot of people don’t know much about unmanned aircraft systems, other than that they’re used for military purposes." With the FAA’s rules still up in the air, though, it’s hard to tell anyone just how non-military drones will actually operate.