For a patient who sustains devastating brain damage, the outcome is often exceedingly grim: if they don't show signs of improvement within a few weeks, they'll be diagnosed as vegetative — unaware of themselves or their environment, and unlikely to ever be again. To their loved ones, these patients are essentially lost, as is the prospect of ever communicating with them again.

Unless, that is, the diagnosis is wrong.

That's the startling possibility raised by a series of recent studies, which used neuroimaging techniques to evaluate awareness levels among patients diagnosed as being in persistent vegetative states (VS) or in minimally conscious states (wherein patients exhibit fleeting, inconsistent awareness). A small number of patients, these studies found, exhibited brain activity that indicates they were able to focus on a given word, answer a question, or complete a task. "We don't yet have a full picture of the abilities of these patients," says Srivas Chennu, PhD, an expert in cognitive and behavioral neuroscience at the University of Cambridge. "And what this research suggests is that there's much more nuance here than anybody thought."

"There's much more nuance here than anybody thought."

Patients in vegetative states can often breathe autonomously, open their eyes, and blink. But despite those abilities, they tend to suffer brain damage so severe that they won't respond to cues, acknowledge a family member, or react to their own name. For decades, those attributes (combined with extensive bedside tests) led doctors to conclude that the inner workings of these patient's brains lacked any and all higher function. Patients were awake, in other words, but they weren't aware.

Several studies in the past decade have questioned that line of reasoning. In 2009, a study on 103 patients found that some of those diagnosed as VS were, in fact, minimally conscious. The research also concluded that some patients diagnosed as minimally conscious actually showed signs of emerging from that state. Other studies, using both EEG and fMRI brain scans, noted that the brains of some vegetative patients engaged with commands similarly to those of healthy control participants. 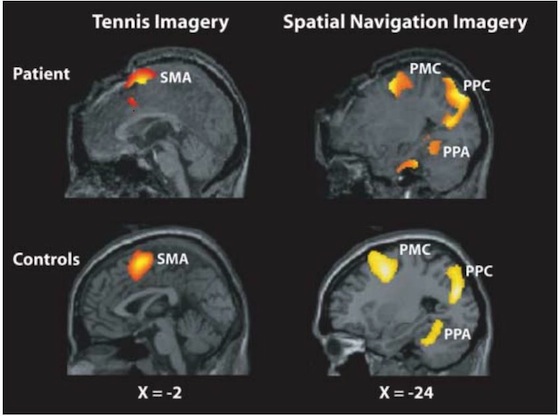 One particularly fascinating study, published earlier this year, used fMRI to document a patient's ability to answer "yes" or "no" questions that indicated he knew his name and where he was located. "What we saw was a complete dissociation between behavior and brain activity," says Lorina Naci, PhD, the study's lead author and a postdoctoral fellow at Western University's Brain and Mind Institute. "A patient can use their brain as proxy for behavior, to show us that they are actually aware."

Another study, published last week and led by Chennu, further reinforces this growing body of research. Twenty-one patients were hooked up to an EEG and played a series of words over 90 second periods. Researchers asked the patients to count how many times the word "yes" was played for 90 seconds, and then to count how many times "no" was played. The goal was to see if any patients could demonstrate not only awareness, but also what Chennu describes as "the ability to pay attention, by switching flexibly between tasks and filtering out irrelevant information."

Of those 21 patients, one individual — whose vegetative state had been deemed severe based on clinical exams — exhibited similar patterns of brain activity to eight perfectly healthy study participants. In other words, researchers say, he was able to follow commands, focus his attention on a given word while disregarding distractions, and switch from task to task at 90-second intervals. "This is a patient who, behaviorally, was unresponsive to any and all stimuli," Chennu says. "So what this tells us is that there is more to the inner worlds of at least some of these individuals than we ever thought."

"This is really riling the ethics community."

But as researchers continue to decipher those inner worlds, their work is eliciting a bevy of questions about how patients in vegetative states should be cared for, what additional rights we might owe them, and whether or not information gleaned from neuroimaging will help or harm family members. "This is really riling the ethics community," says Arthur Caplan, head of the division of bioethics at New York University's Langone Medical Center. "There used to be a presumption that a [VS] patient didn't have consciousness, and that was a clear diagnosis. Now we've got doubts."

Of course, investigators still have plenty of work ahead before they're able to firmly validate these findings. Few patients have been tested, and many of those tests used EEG — a signal vulnerable to misinterpretation. "It's a really tough field, and it can be difficult to interpret results when you have confusing signals and a patient who isn't showing behavioral changes," says Andrew Goldfine, MD, a neurologist at Burke Rehabilitation Hospital. Earlier this year, Goldfine and his colleagues actually published a critique of one landmark vegetative state study — noting that its results were essentially meaningless. "I have no doubt that some patients who appear vegetative are actually fully conscious," Goldfine says. "But these techniques need to be good, and they need to be reliable, before we move ahead in using them clinically."

Not everyone agrees. Naci says she's ready to see neuroimaging tests incorporated into clinical care for VS patients. Her team at Western, as well as Chennu, Goldfine, and other experts in the field, are all collaborating on a suite of neuroimaging tests with funding from the James McDonnell Foundation. "What we want is something we can use anywhere, even in the absence of an expert," Chennu says. "And I hope we can use whatever we develop to engage some patients in some kind of communication."

"Engage some patients in some kind of communication."

Researchers are also working with bioethicists and philosophers to determine how that scenario — thousands of patients being scanned, with some of them exhibiting remarkable awareness — should be handled if and when it arrives. "If a patient can reliably answer questions, then we want to give them some sense of autonomy about their situation," Chennu says. "But then again, just because someone can answer questions, that doesn't mean they can make complex decisions about their care."

Indeed, Caplan at NYU points out that even fully alert patients, like those with Alzheimer's or schizophrenia, are often deemed incapable of making decisions about their medical care. "Trying to figure out what to do with severely brain-damaged patients is a much tougher question," he says. "And right now, we don't necessarily know what to make of the brain activity we do detect, when we detect it."

And even if some patients exhibit remarkable levels of awareness and cognitive capacity, experts say it's likely that the majority simply won't — which could exacerbate painful realities for families. Researchers say they're inundated with requests for a loved one to undergo neuroimaging tests, but any results are still likely to yield more questions — and might even be distressing. "No one, nowhere, can tell a family what they want to know," Caplan says. "What if we do detect awareness? That might not be a good thing, to know that some part of your loved one is trapped in their body, and be unable to do much about it."