‘About Time’: director Richard Curtis on the tradition of time travel comedies

‘About Time’: director Richard Curtis on the tradition of time travel comedies

They go back longer than you think

Bring up a time travel movie with a group of sci-fi or fantasy fans, and odds are you’ll end up in an argument. It simply comes with the territory; whether it’s the chicken-and-the-egg conundrum of John Connor sending his dad back in The Terminator, or the mind-melting temporal gymnastics of Primer, part of the fun of time travel flicks is tearing them apart to suss out their internal logic — and whether they play by their own rules.

But there’s also a quiet dance partner to those sci-fi tales: the comedies and dramas that use the conceit to mine laughs and explore feelings of love and regret. Call it time travel for regular humans, but it’s a subgenre with its own playbook and conventions that goes back to the trail Mark Twain blazed with A Connecticut Yankee in King Arthur’s Court. One of the latest films to carry that mantle forward is About Time. Starring Rachel McAdams and Domhnall Gleeson, it’s the story of a young man who learns he can whip back and forth through time at will.

“'It's A Wonderful Life' is a time travel movie, really."

“There is a sort of tradition,” writer-director Richard Curtis (Love Actually, Notting Hill) tells me, explaining that time travel lets storytellers — and audiences — take a step back to focus on the human condition writ large. “Is Christmas Carol a time travel movie? I think it probably is. And It’s A Wonderful Life is a time travel movie, really,” he says. ”Rather than being in the thick of it, you can stand back and say, ‘Oh this is how we lead our lives. These are the kind of choices we make.’”

Curtis should know. While US audiences primarily associate him with his recent romantic comedies, he’s tackled time travel before in his British TV series Blackadder as well as in the Doctor Who episode “Vincent and the Doctor.” But while Matt Smith’s Doctor had the trusty TARDIS by his side, About Time follows one of the principle guidelines of non-sci-fi time travel: it takes the machine out of time machine.

In About Time Domhnall Gleeson’s Tim is able to zap back simply by finding a dark, quiet place and concentrating on the moment he wants to visit. It’s similar to the way Christopher Reeve transported himself back in the 1980 romance Somewhere in Time, and even brings to mind Ashton Kutcher’s leaps in The Butterfly Effect. It contrasts with movies like Back to the Future or 12 Monkeys that focus on their time travel tech in lingering, loving detail.

“I think if I just said to you now, ‘Travel back to last year,’ your first instinct probably would be to scrunch your fists and scrunch your eyes and try and remember it, and see if when you opened your eyes you were back there,” Curtis says. It’s a simple, naturalistic approach that’s perfectly in tune with the kind of story Curtis is telling; it’s his characters that matter most, not the technological apparatus.

That focus on the emotional carries over to the way these films deal with one of the most classic tropes of time travel — the existential paradox. You know the routine; Marty McFly stops his parents from meeting, and if he doesn’t fix things he’ll be wiped from existence. It’s the cause and effect of time travel ratcheted up to life-and-death stakes, but in films like The Time Traveler’s Wife or Woody Allen’s Midnight in Paris the scenario rarely surfaces. About Time actually dispenses with the notion of grand consequences right off that bat, with Tim’s dad (Bill Nighy) telling him outright that he won’t be able to do things like change the course of world history. 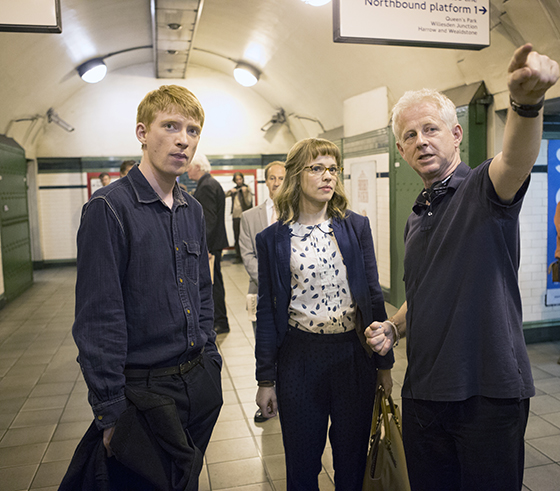 Instead, the focus is on intimate, personal ramifications. There’s a de facto rule in Curtis’ film, for example, that Tim can’t travel back before the birth of his own children — but it’s not because he would endanger his life or destroy the space-time continuum. It’s that doing so would create ripples in time that would actually alter who his children end up becoming. It’s a line Tim’s not willing to cross as a father.

Coming up with the rule was an important breakthrough, Curtis says, and is a prime example of the kind of big-picture perspective he was hoping to capture. “When you start thinking about time travel, you do start thinking about how peculiar life is,” he says. “It’s immensely peculiar that the people who you most love in the world, your children, you have absolutely no choice about. And I think about that a lot. I could have had four completely different people,” he laughs. “And that it’s weird you can’t pick your own parents, which would seem the most basic human right. So you wouldn’t have to get stuck with the people you got stuck with.”

The shift in emphasis doesn’t preclude the subgenre from having any time-travel-logic problems, however. When Tim goes back in time he jumps into his younger self, Quantum Leap-style — but he arrives in the same dark closet he left from, rather than the room Young Tim happened to be in. I ask Curtis about the behind-the-scenes thinking: if he and I were in the same room talking, and his future self jumped back to this exact moment, would he vanish before my eyes, rematerializing in a darkened room somewhere?

“But that would leave a perplexed person in the room, wouldn’t it?”

About Time expands nationwide this weekend.