The robot construction kit for people who don't read the manual

Robots are cool. That much goes without dispute, but part of their appeal lies in just how complex, intricate, and versatile such machines can be, which in turn also makes them rather difficult to build. Modular Robotics, the company behind the Cubelets platform for making rudimentary bots, today introduces Moss, a robot construction kit that requires no special skills to use. 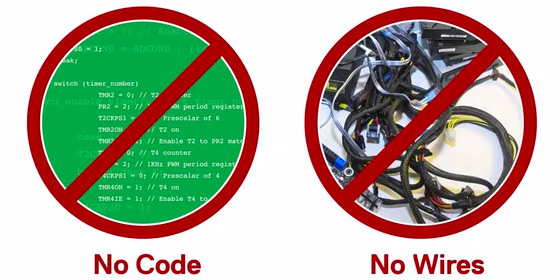 Building on everything learned from Cubelets, the new Moss kit is more varied and sophisticated, but keeps all the wiring, coding, and other nitty gritty details tucked out of the way. All you need to do is decide how to combine the various magnetically-coupling modules together. Color coding will guide users as to what each side of each module does, with some of them moving your creation around and others, like the distance sensor, giving it some basic awareness.

Modular Robotics is already hand-assembling Moss modules in its factory in Boulder, Colorado, where production will ramp up in earnest sometime in mid-December. A $100,000 Kickstarter campaign will get you in on the Moss-building adventure early, though design director Eric Schweikardt tells the BBC that Modular Robotics doesn't actually need the funding to proceed with manufacturing. The campaign, which runs through December 11th, is there because "in 2013, it seems like the place where people look for cool new tech products."

Update: It would appear the $100,000 funding goal was far too modest. The Moss project surpassed the mark within its first dozen hours on Kickstarter.

We just funded on Kickstarter! 100k in 12 hours! pic.twitter.com/wrqzJQCcX0