Sony reveals PlayStation 4 innards a week before its release

Share All sharing options for: Sony reveals PlayStation 4 innards a week before its release

Earlier this year, Sony famously made its PS4 announcement without actually showing anyone the hardware. We all had to wait months for E3 in Los Angeles to see the new black box — even hardware architect Mark Cerny was kept in the dark — but now everyone knows of the sharp, angular new look. What we hadn't yet glimsped were the innards of the PlayStation 4, which have today finally been revealed, courtesy of Wired.

Sony engineering director Yasuhiro Ootori both unboxes and tears down the new console, exposing its metallic internals for everyone to see. There's a satisfyingly chunky heatsink and a predictably small fan, squeezed in alongside an integrated power supply and the usual circuit boards and components. You'll also find some external details that may have slipped your attention so far, such as the tiny power and eject buttons nestled in the fissure that dissects the matte and glossy parts of the PS4. 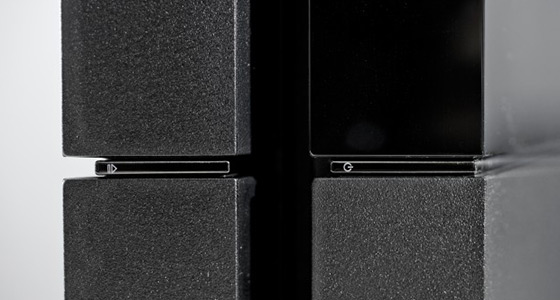 With only a week to go until the PS4's US release, this will likely be the best view the world gets of the new console before being able to stump up the $399 and take one home.

Read next: PS4 is a return to the spirit of the early PlayStation days, says the man who built it

Sony PlayStation 4: everything you need to know