Robert Rodriguez expanding 'From Dusk Till Dawn' into a TV series

Robert Rodriguez expanding 'From Dusk Till Dawn' into a TV series

1996 cult classic From Dusk Till Dawn has already gotten a sequel and a prequel, and now it's becoming a TV series. El Rey Network, founded by Robert Rodriguez and set to launch next month, announced yesterday that the series has begun filming, with a 10-episode season coming early next year. The show is described as a "supernatural crime saga," by which the network seems to mean an expansion of the original film: brothers Seth and Richard Gecko are once again going on the run after a bank heist, crossing the Mexican border with a family of hostages, and fighting for their lives in a strip club full of vampires. "The series deepens the tone of the film, adds new characters and backstories, and expands the Mesoamerican mythology behind the vampires," the creators say in a release. 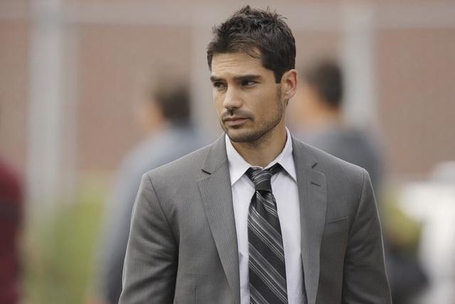 While Robert Rodriguez will direct the first two episodes and act as executive producer for the whole series, Quentin Tarantino doesn't seem to be coming back either as a writer or a star, and neither is his co-star George Clooney. Clooney's role as Seth Gecko will be filled by D.J. Cotrona, who has starred in GI Joe: Retaliation and the short-lived crime procedural Detroit 1-8-7, seen above.

The sequel and prequel introduced almost entirely new casts (the latter including cynical 19th-century writer Ambrose Bierce), but so far, only one new character — a Texas ranger — has been revealed for From Dusk Till Dawn: The Series. Rodriguez' network name is a reference to the Gecko brothers' enigmatic destination in the film, but El Rey was first introduced in a very different context: it was the setting for 1958 novel The Getaway's surreal finale, in which a luxurious haven for criminals proves a sinister trap for the novel's bank-robber protagonists. But an actual journey to El Rey is probably too much to hope for in this series.