Will the global NSA backlash break the internet?

Share All sharing options for: Will the global NSA backlash break the internet?

The NSA's ongoing surveillance has spurred many governments to pursue stronger data-protection laws, but there are growing concerns that this backlash could divide the internet along national borders, threatening the principles of openness and fluidity that it was founded upon.

In September, Brazil announced plans to build a fiber-optic cable that would route internet traffic away from US servers, theoretically keeping its citizens’ data away from the NSA. The policy has yet to be implemented, and many question whether it will actually be effective, but others appear to be following Brazil’s lead.

In Germany, telecommunications companies are working to create encrypted email and internet services that would keep user data within the country's borders, and Switzerland's Swisscom has begun building a domestic cloud-service to attract companies that may have grown leery of American spying.

"The US has done a disservice to netizens everywhere — forcing people to choose between interconnectivity and privacy."

The idea is that such country-based networks will keep user data within national borders and away from the NSA, which would be forced to comply with governments’ privacy laws. But experts fear that they may lead to greater "Balkanization" — a term derived from the division of the Balkan Peninsula in the 19th century — transforming the unified web into a fragmented collection of national internets.

"The US has done a disservice to netizens everywhere — forcing people to choose between interconnectivity and privacy," Sascha Meinrath, director of the Open Technology Institute at the New America Foundation, said in an email to The Verge. In an editorial published last month, Meinrath likened internet Balkanization to the European railway system, where an array of different signaling technologies leads to "delays, inefficiencies, and higher costs" as trains cross borders.

The concept of a national internet is hardly new, though it has traditionally been associated with more repressive regimes. China's so-called "Great Firewall" has effectively censored the internet for years, and Iran began laying the groundwork for its own state-controlled web earlier this year. But the NSA controversy appears to have reignited and legitimized debates over national web sovereignty, raising the specter of an internet divided by firewalls and border controls.

"A Balkanized internet will look like the online world through the lens of the Chinese firewall or Iran's Halal Internet," Meinrath says. "It will be functionally stunted, less interoperable, more expensive to build and maintain, and full of unexpected pitfalls."

"there are very different types of power, and it's not distributed equally."

The US has so far wielded disproportionate control over the internet, due largely to what economists call "first mover's advantage": the internet was born in the US, and the most dominant web companies — Google, Facebook, Microsoft — are all US-based. It also has tremendous influence over the Internet Corporation for Assigned Names and Numbers (ICANN), an American nonprofit organization that has become the de facto authority on assigning domain names and establishing common web standards.

The system has so far worked well, says Allan Friedman of the Brookings Institution, because of America's traditionally strong rule of law and the apparent willingness of US technology companies to stand up to government interference. He cites last year's defeat of SOPA and PIPA — proposed US laws that threatened to censor websites on a loosely defined premise of piracy — as an example of the "internet community" prevailing over American corporate interests.

But there have been lingering tensions over America’s web hegemony. Several countries called for a more globally representative governance system at a summit last year in Dubai, and the NSA scandal that ignited seven months later only amplified calls for change.

"What the NSA has shown is that countries can still exert a great amount of force over the internet," says Friedman, who authored a paper last month on how governments can use web regulations to erect trade barriers. "It's also shown that there are very different types of power, and it's not distributed equally." 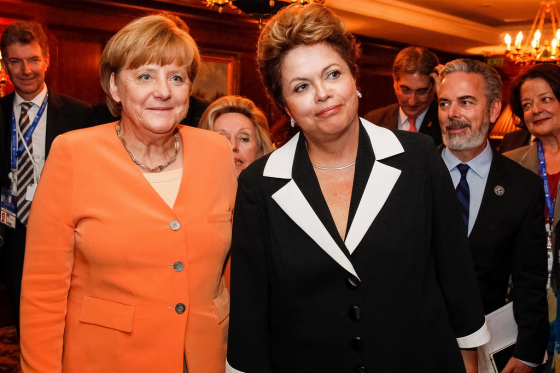 Not surprisingly, the two countries to react most strongly to the NSA scandal — Brazil and Germany — are also the two spearheading calls for regulatory change. This week, the two countries formally proposed a UN resolution calling for stronger internet privacy protection, echoing an impassioned speech that Brazilian president Dilma Rousseff delivered to the organization in September, after it was reported that the NSA had been conducting surveillance on her office.

"When we learned about PRISM and Tempora from the press we immediately decided to act," says Christian Jäger, product manager of Deutsche Telekom’s "E-Mail made in Germany" service, referring to the US and UK data collection programs revealed in leaks published earlier this year.

"E-Mail made in Germany"

Deutsche Telekom, which is 32 percent owned by the German government, is looking to capitalize on the privacy concerns of German citizens by promising to keep their communications within the country. Jäger says that together with partners Web.de and GMX, the initiative covers two-thirds of all German email accounts, 80 percent of which have already switched over to the encrypted service. The company says it is considering launching similar initiatives on other web platforms, though experts say it's difficult to imagine German users abandoning American services like Google and Facebook altogether.

The German email initiative isn’t nearly as drastic as the plans that Brazil has put forward, though it's certainly a move toward the same walled-off landscape that many have feared.

"The network experience is key," says Leslie Daigle, chief technology officer at the Internet Society. "Increased Balkanization is typically correlated with less diversity of offerings, less diversity of support infrastructure, and fewer interconnects with other parts of the [internet]."

Such interconnectedness, she adds, has proven particularly valuable in times of crisis.

"When we've seen natural disasters hit countries, it's diversity of infrastructure that has meant those countries were not entirely wiped off the internet map," Daigle says in an email to The Verge. "When there was an earthquake and tsunami in Japan, there was network damage but that meant slower connections, not complete lack of connection."

Yet others see the move away from a US-centric internet as an encouraging development, arguing that it could lead to a more balanced power structure.

"The problem with internet governance is that the Americentric model is the worst one, except for all the others."

"The concentration of power in the hands of a very few large companies — Facebook, Google — that’s what’s driving Balkanization," says Geert Lovink, founding director of the Institute of Network Cultures research center in Amsterdam. "That actually is Balkanization."

"Balkanization is seen as an atavism — something of the past that returns," he continues. "But that is really not the case."

Lovink acknowledges that American hegemony may have made the web more fluid and interoperable, though he says the NSA scandal has proven that "usability" isn’t the only thing citizens value. He welcomes the conflict that Brazil and Germany have introduced because it signals a shift away from a web dominated by the US "engineering class."

What this new internet would look like remains uncertain. Some say further fragmentation may only make it easier for governments to flex their online muscles, leading to more of the surveillance and espionage that Brazil and Germany are looking to combat. In the absence of a governance structure based on consensus and openness, they say, regimes could lord over their domestic networks with impunity.

"The problem with internet governance is that the Americentric model is the worst one, except for all the others," says Meinrath, channeling Winston Churchill. "I would like to see legal clarity — domestically and internationally — that re-establishes rule of law over surveillance and monitoring."

"Otherwise, we create a new international norm whereby acceptable behavior includes widespread spying and hacking that detrimentally impacts us all."