One standard to sync them all: AllSeen Alliance forms to accelerate Internet of Things adoption

Share All sharing options for: One standard to sync them all: AllSeen Alliance forms to accelerate Internet of Things adoption

Eighteen months ago, Qualcomm SVP Rob Chandhok succinctly explained why the internet of things was failing. Instead of working together, manufacturers designed their smart televisions and appliances to only communicate with their own proprietary applications. Instead of building an ecosystem of devices that could talk to one another, they only built for themselves. Is a smart light bulb really "smart" if you need a special switch, too?

Now, Qualcomm believes it can tackle that problem — with a little help. Today, the Linux Foundation has announced the formation of the AllSeen Alliance, a new consortium dedicated to building and maintaining an open-source framework that lets devices of all shapes and sizes seamlessly communicate with each other. Qualcomm, LG, Panasonic, Haier, Silicon Image and TP-LINK are headlining the initiative, which also includes names as diverse as Cisco, Sears, and Wilocity.

But the star member, for now, is Qualcomm — because the entire AllSeen Alliance is based on a piece of Qualcomm technology. After failing to make much of a dent with its AllJoyn tech over the last couple of years, the company is giving up ownership of the code to the AllSeen Alliance.

"AllJoyn's language is the language of interfaces."

That could wind up being a pretty nifty thing, because what AllJoyn already does is quite useful. Instead of dictating that devices have to connect with each other over Wi-Fi or Bluetooth or Zigbee and having users painstakingly pair those devices, AllJoyn can do it all, automatically discovering devices and negotiating connections with whichever protocols are available.

While it's not clear why AllJoyn didn't take off under Qualcomm's watch, we spoke with Qualcomm SVP Rob Chandhok and Linux Foundation executive director Jim Zemlin about where it's going now. They explained that spinning out AllJoyn into the AllSeen Alliance effort is simply the next logical step in its development. Like the browser rendering engine WebKit, like Eclipse, like Hadoop, and like Linux itself, they hope AllSeen can become a standard by getting companies to share the burden of building something they'll end up needing for their devices and services anyhow.

"We're at this place where people are trying to do everything vertically because they don't see another solution, and the Alliance is saying 'here's a big honking piece of functionality Qualcomm is willing to give away,'" Chandhok explains. "It's a huge problem that needs to be solved... that simply makes no sense for everybody to keep reinventing by themselves over and over."

"I think this code is going to talk," Zemlin adds. "When people see what's there, how they can immediately benefit in their products today, you're going to see a lot more organizations piling on." 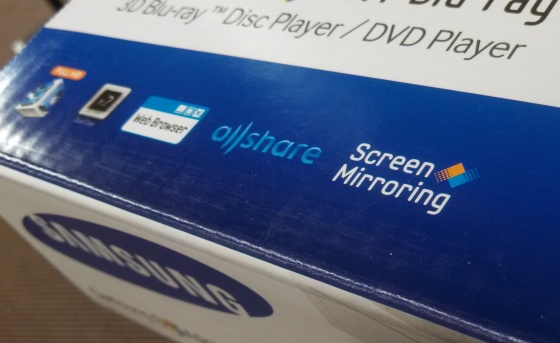 While the typical trouble with standards has been well-documented, AllSeen might have more of a chance than most. Since its main task of negotiating connections is device, OS, and network agnostic, it shouldn't necessarily become obsolete when newer technologies come along. Even if every manufacturer calls AllSeen something different on the box — a stumbling block for the Miracast screen-sharing tech — it might not matter as much here. Since AllSeen devices are designed to automatically find one another across whatever connectivity is available, your smartphone should theoretically be able to tell that LG's Smart Share and Samsung's AllShare are the same thing.

"[LG] recognizes that it's better for everyone's smartphone to be able to talk to their TV."

With the member companies currently in the stable, Chandhok thinks the Alliance could soon have standard interfaces for controlling lighting, air conditioning, perhaps even automobile dashboards before too long, and he imagines a not-too-distant future where devices can intelligently give their users control. When an automobile detects that passengers are inside a vehicle, perhaps based on their phone's proximity, it could let them play music and adjust the climate without reaching for a dial. He cautions not to expect too much too soon, though. "Experiences are going to start small, just like the locks and lightbulbs, and are going to slowly get more integrated."

The Alliance will be showing off some of the first AllSeen products at CES this January, including new televisions from LG.