With all 10 teams now announced, Formula E is ready for its inaugural season to begin in September, 2014

Venturi Grand Prix, a joint venture between Monaco-based Venturi Automobiles and famed US actor Leonardo DiCaprio, is the 10th and final team to announce its participation in the inaugural season of Formula E racing. Organized by the FIA, the same group responsible for Formula 1 and the World Rally Championship, the all-electric competition is designed to attract fans of more environmentally friendly vehicles to the thrills and spills of high-speed competition. DiCaprio underlines the importance of "fuel-efficient, clean-energy vehicles," which he considers to be "key to our planet's future."

DiCaprio adds his name to a distinguished list of participants that includes a similarly psyched-up Richard Branson and his own Virgin Racing team. Branson believes Formula E will provide an exciting showcase for electric vehicles, while the competitive design element between the varying teams should spur innovation in the development of better and more efficient EVs. With the two well-known names serving as ambassadors and a selection of other respected teams like Audi Sport and Andretti Autosport, the future of electric racing looks set for a bright beginning. 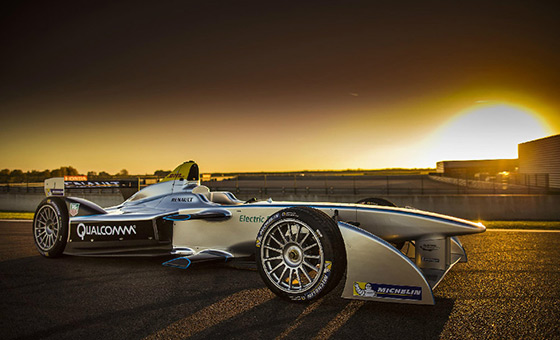