Water on the red planet: more findings point to flowing liquid on Mars

Is water seeping out of Martian soil?

Share All sharing options for: Water on the red planet: more findings point to flowing liquid on Mars

During spring months on Earth, the ground thaws and new life abounds. On Mars, scientists have observed activity of a different sort — water that seems to bleed from the ground.

Mars is thought to have been much wetter in the past with oceans, rivers, and even lakes that could have supported life. By now, those bodies of water are long gone. But despite the dry, desolate picture we have of modern Mars, scientists in 2011 spotted what appeared to be seasonal melts of water flowing down gullies. These appear in photographs as dark streaks of what is likely to be water, and while the flows are only a few yards wide, they stretch for over a half a mile. In new research published in Nature Geoscience, scientists have discovered even more of these flowing features in surprising locations, and they say that some of the water might be habitable for microbes. "There is a lot more water near the surface at the equator of Mars than anyone expected or really knows how to explain," says Alfred McEwen, the lead researcher on the project.

"There is a lot more water ... than anyone really knows how to explain."

The scientists call these features "recurring slope lineae" (RSL). That name is intentionally clunky in an effort to eliminate any tantalizing assumptions about the origins of these features. But despite their caution in naming the flows, researchers feel increasingly confident that RSL indicate flowing water. The RSL are found in warm places and during hotter periods on Mars: they seem to appear in warmer equatorial regions and are active in spring and summer months before fading away when temperatures drop. The flows also only appear on darker surfaces that absorb more heat. 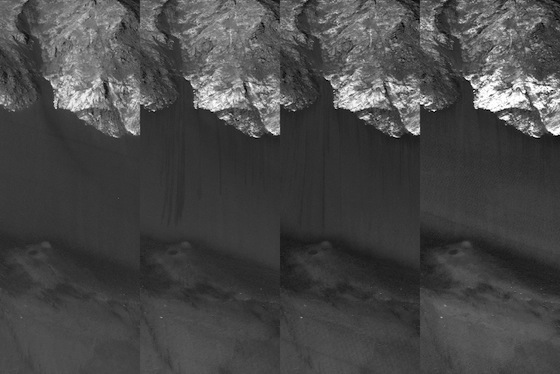 There's no way to know the salt content of the flows, but it's possible that some of it might even be freshwater. As a consequence, scientists are concerned about the protection of these sites. Liquid, fresh water is important for the habitability of these sites — both for Earth-based microbes that may have hitched a ride to Mars and for potential Martian microbes. So if rovers do explore nearby, extra precautions must be taken to ensure the water isn't inadvertently contaminated.

The source of the water is still a mystery

But the source of the water is still a mystery. When RSL were first spotted, they were in regions where there's probably shallow ice left over from a more moist climate. But this latest research seems to have found RSL in areas that aren't likely to have any ice — leading scientists to speculate that the flows come from deep, salty groundwater in the planet's crust. In fact, these equatorial regions of Mars were thought to be very dry, so any water there is a surprise, and difficult to explain.

For now, the investigations continue. "[The water] still needs some mechanism to replenish, so we haven't figured all of this out," McEwen says. In addition to the questions surrounding the origins of RSL, there's one big asterisk next to this whole discovery — while water is the most likely cause of the flows, scientists don't have the ability to directly prove it. And in the near term, that'll remain a challenge: Martian rovers aren't near any of these sites, which are comprised of tough terrain. "These are very steep, rocky slopes. These are the most difficult places to land," McEwen says. "We've never gone close to landing near one of these kind of sites."

For now, the best chance to definitively identify water is through monitoring from the Mars Reconnaissance Orbiter, which might one day yield more robust data. "This does not fit anybody's model of the water cycle on Mars," McEwen says. "This is a surprise, and we're still being surprised by what we see on Mars. There's clearly a lot more that we have to learn."