With Angry Birds Go, developer Rovio is beating Mario Kart at its own game, and it's doing it on the most popular platform there is: mobile. It features all of the right ingredients, including a cast of familiar and adorable characters, a charming and colorful presentation, and gameplay that's both easy to pick up and incredibly fun. But that potential is squandered — in the shift to free-to-play, Rovio has turned a great game into an annoying experience filled with incessant calls to spend more money.

You start out with just one racer — the iconic red bird — and one car, and as you play you'll earn cash that can be used to upgrade your vehicle and purchase new ones. There's actually a good amount of variety to the races: in addition to standard sprints to the finish line, there are also time trials where the track is littered with obstacles, and special events where you'll need to smash as much fruit as possible. There are also what are essentially boss races, where you have to defeat one of the Angry Birds cast members in order to unlock them as a playable character. The controls are dead simple — you can turn left and right, using either touch or tilt controls, and you accelerate automatically — but the physics feel good and there are plenty of power-ups to mess around with.

These races are all fun, but the game's structure necessitates lots of grinding. In order to enter later races you'll need to continually upgrade your car, which means you'll have to play through races multiple times to raise the cash, unless you want to spend some real-world dollars. It's a setup that will be intimately familiar to fans of the Asphalt series. However, it wouldn't be such a big deal if it weren't for Angry Birds Go's most obnoxious feature: an energy system that limits how much you can play at any given time.

There's an energy system that limits how much you can play

Just like in many Facebook games and mobile titles like Candy Crush Saga, you're given five units of energy per character, which deplete with each race and slowly regenerate over time. It takes more than 10 minutes for a unit to recharge, and when you run out, you can't play. The issue lessens as you unlock more characters, thus giving you more energy, but even then you'll still find yourself regularly sitting around and waiting to play (again, unless you want to spend some cash). Unlocking those new characters is a painfully slow process thanks to the limitations of the energy system. 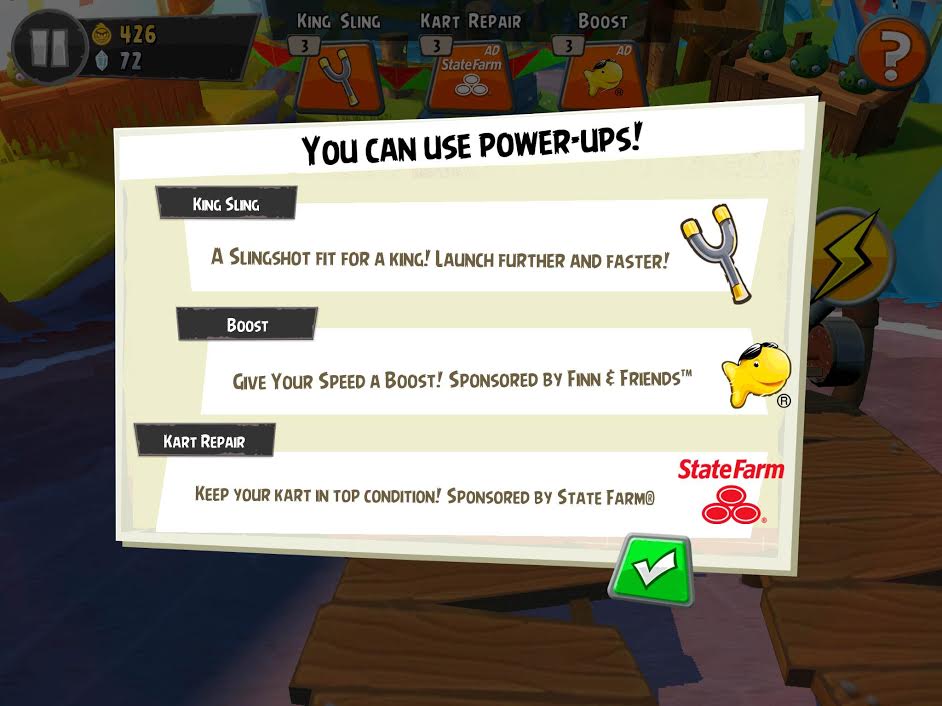 The majority of the cars, including all of the ones that don't look like a boring wooden box, also need to be bought. You can do this as an in-app purchase, or, like in Angry Birds Star Wars II, by splurging on physical Angry Birds Go figures that can be imported into the game by scanning their QR codes. The toys are actually quite nice, tiny little cars that you can play with in real life, but it's annoying just how little content you're given with the initial download. The really good cars can't be purchased with in-game currency either, so you'll definitely need to spend money to use them, and they cost anywhere from $2.99 to a staggering $49.99.

Less intrusive but still annoying are the incessant ads, which at their worst come in the form of sponsored power-ups. You can add an extra boost to your car with an engine that spews Pepperidge Farm Goldfish crackers, or fix your kart mid-race with a little help from State Farm insurance. The ads all feel incredibly out of place and cheapen an otherwise enjoyable experience.

Free-to-play games aren't universally evil — Plants vs. Zombies 2 showed that it's possible to have a free game with in-app purchases that aren't constantly begging you for cash. Angry Birds Go, meanwhile, feels like a step in the opposite direction. It's a terrific, well-crafted experience perfectly suited to mobile devices, but its design is hampered by its free-to-play structure — it's a great game that's no fun to play. It's especially surprising considering how generous Rovio has been with content in the past; the original Angry Birds still receives free updates to this day. Angry Birds Go is a game that forces you to decide whether you want to pay or wait, and that's never fun.

Though it might give you a craving for delicious Goldfish crackers.