Monsanto looks to benevolent bacteria for its next breakthrough

Monsanto looks to benevolent bacteria for its next breakthrough

Via The Wall Street Journal | Source Monsanto and Novozymes

Infamous for its genetically modified crops and monopoly-like control of the North American seed market, Monsanto is taking a rather more positive step this week with the announcement of a partnership with Danish research lab Novozymes. Monsanto will pay Novozymes $300 million up front to kickstart what the two companies are calling the BioAg Alliance, a joint venture for the discovery and development of microorganisms that can enhance plant fertility and disease resistance.

"The next layer of opportunity for growers to drive yield and productivity."

Novozymes has established itself as a leader in this field of digging up bacteria, fungi, and other microbial biological agents that have a beneficial impact on crop yields, and Monsanto is already running a similar research program within its labs. The goal of the present partnership is to accelerate the rate of progress, with the American company focusing on field testing and commercialization and its Danish partner taking care of production and supply.

This research into naturally occurring microbes suggests a more sustainable and publicly palatable route to enhancing crop yields for Monsanto, which this year also spent $1 billion on acquiring the Climate Corporation in an effort to boost farmers' productivity through a suite of localized weather prediction and advice software. As company CTO Robb Fraley puts it, agricultural biologicals represent "the next layer of opportunity for growers to drive yield and productivity while helping the preservation of finite natural resources in our precious planet." 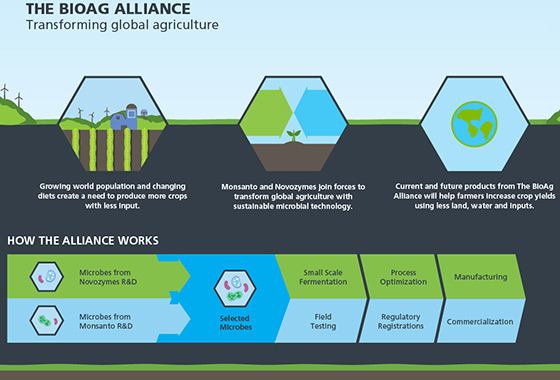