Russian President Vladimir Putin tightened his grip over state media this week after dissolving one of Russia's most globally respected news outlets, replacing it with what many fear may be a propaganda mouthpiece for the Kremlin.

In a decree issued Monday, Putin abruptly liquidated the prominent news agency RIA Novosti, merging it with radio service Voice of Russia to create a new media conglomerate called Rossia Segodnya, or Russia Today. Like its predecessors, the new company will be state-owned, and will be separate from the Russia Today television station, now known as RT. Yet aside from the company’s executive director — a TV presenter and Putin loyalist known for his anti-gay rhetoric and conspiracy theories — details on its scope and structure remain unclear.

RIA Novosti's coverage is widely seen as balanced and neutral  despite the agency's ties to the Kremlin, but the conglomerate announced this week appears to be more slanted in nature. According to government officials, the move aims to both cut costs and strengthen the image of Russia abroad.

"Russia has its own independent politics and strongly defends its national interests."

"Russia has its own independent politics and strongly defends its national interests: it’s difficult to explain this to the world but we can do this, and we must do this," Sergei Ivanov, Putin’s presidential chief of staff, told reporters on Monday. "We must tell the truth, make it accessible to the most people possible and use modern language and the best available technologies in doing so."

Others see the move as a sign of Russia's growing encroachment on the media, raising concerns that Putin may look to exert greater control going forward.

"The move is the latest in a series of shifts in Russia's news landscape which appear to point towards a tightening of state control in the already heavily regulated media sector," RIA Novosti said in an English-language article on its own dissolution. 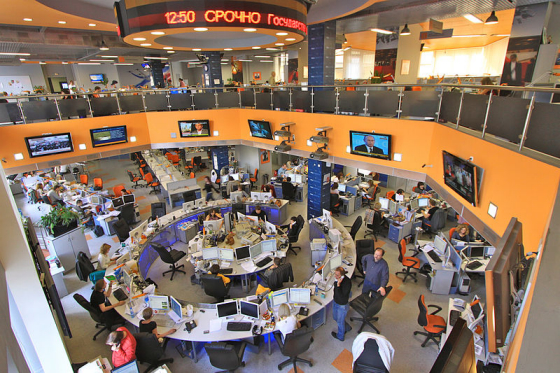 The RIA Novosti newsroom at its headquarters in Moscow. (Jürg Vollmer / Wikimedia Commons)

Created in 1941 as the Soviet Information Bureau, RIA Novosti is one of Russia’s three major news agencies, together with the state-owned Itar-Tass and the privately owned Interfax. According to the company, RIA Novosti currently has reporters in 45 countries across the globe, providing news in 14 languages, and it has a large international readership.

The move comes at a time of heightened political tensions for Putin, who is believed to have pressured neighboring Ukraine into rejecting a deal that would have strengthened its economic and political ties with the European Union. The decision to reject the deal has sparked widespread protests in Ukraine, with pro-EU demonstrators calling for the resignation of President Viktor Yanukovych.

"Putin has been excessively worried about mass protests."

It's not clear whether the Ukraine protests directly spurred Putin to liquidate RIA Novosti, though the timing and abrupt nature of the move has led many to speculate that the Kremlin may be looking to take greater control over how the protests and other sensitive issues are covered in the press. This week's announcement came just two days after Putin held private talks with Yanukovychh over a stronger "strategic partnership" between Russia and its former Soviet republic. It also took journalists and even some officials by surprise, including executives at both RIA Novosti and Voice of Russia.

Dmitry Gorenburg, a senior analyst and Russia expert at the nonprofit think tank CNA, says it’s unlikely that the new agency will take form soon enough to wield significant influence over the Ukraine protests — "RIA Novosti isn’t disappearing overnight" — though he acknowledges that the timing is curious.

"There don't seem to be any signals that there was preparation [ahead of the decision] so that implies to me that it was decided fairly expeditiously," says Gorenburg. "And we know that Putin has been excessively worried about mass protests being the main danger to his regime’s long-term survival."

"The deal seems very simple: we pay you a good salary but you don't cross the red lines set by us."

"The deal seems very simple: we pay you a good salary but you don't cross the red lines set by us," Gabuev said in an email.

Unlike TV news networks, which remain under tight government control, RIA Novosti has not hesitated to report on politically sensitive issues, including the massive national protests that erupted in 2011 amid allegations of widespread election fraud. The demonstrations sent shockwaves across the Kremlin, prompting Putin to spread conspiracy theories involving Western leaders and media outlets.

Such anti-Western rhetoric has remained a cornerstone of Putin’s third presidential term, as the pugnacious leader looks to shore up support among his conservative base. On the global stage, he’s been a strong supporter of embattled Syrian President Bashar al-Assad — standing in opposition to the US — while at home, he’s endorsed controversial anti-gay laws that have prompted calls for a boycott on the 2014 Winter Olympic Games in the Russian city of Sochi. (RIA Novosti, incidentally, was one of the Olympic Games' official sponsors.)

It remains unclear whether Russia Today’s coverage will echo Putin’s conservative stance, though the appointment of Dmitry Kiselyov as executive director suggests that it will. A popular news anchor for the domestic TV station Rossiya 1 TV, Kiseylov made headlines last year for declaring, on air, that gays should not be allowed to donate blood or sperm, and that their hearts should be burned and buried rather than donated for transplants. More recently, he’s spoken out against the Ukraine protests, claiming that they’re being fueled by the US and European governments. A decade earlier, Kiseylov worked as an anchor on a pro-government news station in Ukraine, where he publicly excoriated the 2004 protests against rigged elections.

The dissolution of RIA Novosti won’t leave readers entirely in the dark; Gorenburg notes that there are still several reliable online news sources and daily newspapers for both domestic and international audiences. But few can match the breadth and clout of RIA Novosti's reporting, and the true impact of its absence may not be felt for years to come.

"I think one of the biggest domestic impacts will be in terms of training journalists," Gorenburg says. "It's a huge organization, and a lot of people that went on to make names for themselves started out at RIA Novosti or were there at some point."

He adds that if the restructuring of RIA Novosti proves as transformative as many fear, "that's going to have an impact on the quality of journalism going forward."