Share All sharing options for: Intel puts its logo inside FC Barcelona's shirt

Priding itself on being més que un club (more than a club), FC Barcelona has been extremely selective about the names of sponsors it places on its shirt. For a long time, the team didn't even have any advertising on its uniform, but now it's moving with the times and "pioneering" a new ad location: the inside of the shirt. A new global sponsorship deal between Intel and FCB will see the familiar "Intel Inside" logo emblazoned in a strategic spot inside the Barcelona jersey.

There's a broader partnership at play here, with Intel providing the Barcelona squad with the latest 2-in-1 devices and other tech to turn the Blaugrana "into one of the most technologically advanced football clubs in world." Though the financials of the deal have not been disclosed, Forbes reports that Intel will also be paying $5 million per year for the privilege of being associated with the globally renowned club and being able to imprint its logo at the quirky location. 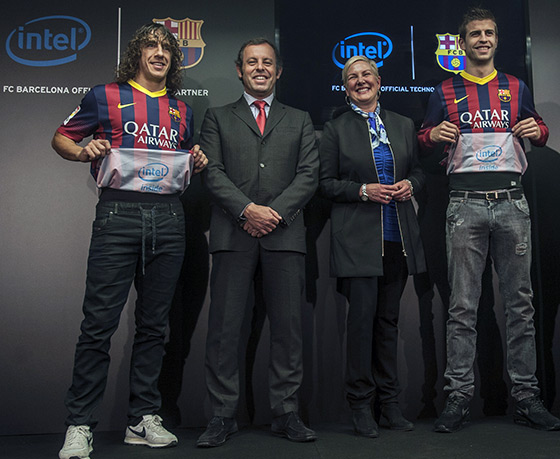