In June, Oculus raised $16 million to finish research and development on its critically acclaimed virtual-reality headgear, and today the company's taking the next step. With a new lead investor, Andreessen Horowitz, the company has now secured another $75 million in Series B funding. Marc Andreessen himself is joining the Oculus board, along with fellow partner Chris Dixon, and it's a brand-new version of the Oculus Rift headset that convinced them to join in.

"They have really nailed those things."

"Virtual reality has been a long-standing dream in tech and sci-fi. To me it always felt kind of inevitable but it was one of those things, you never knew quite when it would become a reality," Dixon tells The Verge. He was impressed with the first developer kit he saw last year, but not enough to invest. Now, however, he says that Oculus has achieved what he was looking for. "The dimensions where you need to improve this kind of VR are latency, resolution and head tracking, and they have really nailed those things."

All of Oculus' previous partners, including Matrix and Spark, are also increasing their investment. It's a very sizable Series B round, a lot of money for a company that hasn't released a consumer product yet.

However, Oculus CEO Brendan Iribe tells The Verge that his company needs the money to build that consumer product, plain and simple. "The reality is going into the consumer market with a full platform as expansive as this at high volume... really takes a significant investment," says Iribe. "You look at the cost of goods at the hardware side, setting up the infrastructure... it's pretty easy to do the math."

"We always knew we needed a B round to get to the consumer market at volume. We didn't know the scale we needed for V1 until recently," Iribe says. 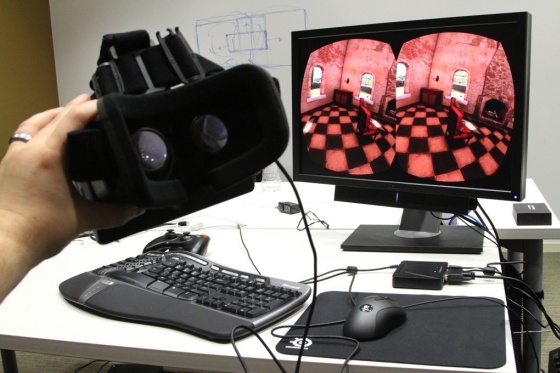 In addition to mass producing the hardware, though, the company says it wants to support software developers who are risking their time and money developing games for the Oculus Rift instead of more established platforms.

"We don't want them to have to shoulder all of that risk themselves."

"They're not just betting that their game will be successful, they're also betting that Oculus will sell enough units to make their game profitable, and that's a really big bet for a developer to make," says Palmer Luckey, Oculus founder. "If a company is going to take out a lot of time from their development schedule to build a game in VR, we don't want them to have to shoulder all of that risk themselves."

Oculus wouldn't tell us when it plans to ship the consumer version of the virtual reality headset, but the company says it has now sold 40,000 Oculus Rift developer kits, and expects to sell through 70,000 by the time it gets to the consumer market. Last month, famed game developer John Carmack left the company he founded, id Software, to work full-time at Oculus.