Two years ago, Samsung’s Series 9 represented a sea change. It was one of the lightest, thinnest, best-looking laptops ever made, and Samsung made it powerful too. It was the first ultrabook to be both really beautiful and really good, to prove that Apple hadn’t discovered and hidden some magical formula. But it was also riddled with first-generation problems and a massive price tag. Still, it proved something, and the entire industry took notice.

Two years later, and everything’s changed but Samsung. Ultrabooks — now long-lasting, powerful, thin, and often downright affordable — are everywhere, and many manufacturers are already looking for the next big, twisting, shape-shifting thing. Samsung, on the other hand, has come back with a new name, a new product, and a new vision for how impressive a slim laptop can really be.

The Ativ Book 9 Plus (really just an updated Series 9 with a somehow even clumsier name) is thin. It’s light. It’s powerful. It also has a spectacularly high-resolution screen, a number of apps and services that no other company offers, and the promise of once again not only competing with the MacBook Air and its ilk, but besting them at every turn. And while it’s still expensive, at $1,399.99, it’s at least stomachable this time.

Samsung’s made a habit of proving it can achieve things technologically that no one else can. That's how it took over the smartphone market, and laptops are next on the agenda. 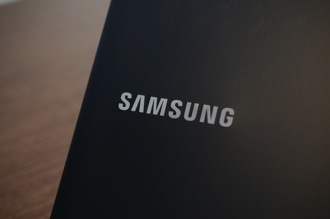 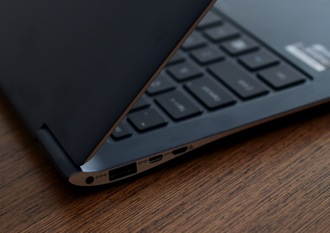 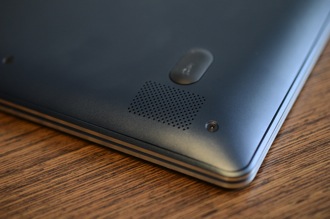 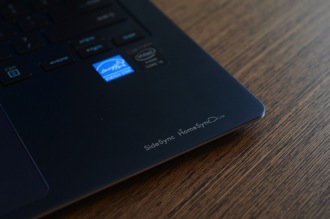 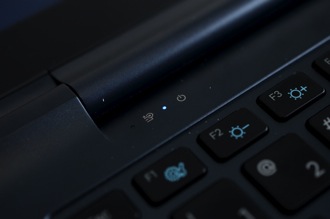 Most manufacturers take "compete with the MacBook Air" much too seriously, as if there’s only one way to make a thin and light laptop. Samsung proves otherwise. The Ativ Book 9 Plus is different from the Air in nearly every respect — it’s dark and smooth, with softly rounded corners and a slim, sloping profile that makes it look even less than 0.53 inches thick. I like the blue shell and the glistening silver accents, though the display’s black bezel undoes the Book 9 Plus’ unibody appearance. It’s not the minimalist masterpiece the Air is, but it’s a striking laptop.

At 0.54 inches thick, the Ativ Book 9 Plus is almost exactly as tall as its two USB ports. The aluminum body weighs only 3.06 pounds, but it feels sturdy and well-made. For some reason, I find myself frequently carrying my laptop by its hinge, or its palmrest, or with my thumb in the space between base and lid. No matter how I pick it up, toss it around, or carry it in my bag, all the Book 9 Plus ever accrues is small, easily removable scuffs on the lid. The Series 9 used to be fragile and precious, but this Ativ is ready for action.

Samsung's chassis remains the same, but the display gets better and better

Samsung and fabulous excess get along beautifully, and nowhere is that more clear than on the Book 9 Plus’ 13.3-inch, 3200 x 1800 display. The screen is high-res and incredibly beautiful, with vibrant colors, fantastic touch response, and nearly perfect viewing angles. But it’s telling that the screen is set by default to 1920 x 1080: when you crank its resolution all the way up, nearly everything about Windows becomes small enough to make you squint 3 inches from the screen in order to use the computer. It even warns you: "Screen resolution is very high. Double click here to change it."

Having all the extra pixels makes even the "low" 1080p resolution look better than ever, though, with crisper text and more detailed images. Just like with the MacBook Pro with Retina Display, it’s probably a bad idea to use this screen to its fullest extent, but it’s a great display no matter how you slice it. The only downside is the impossibly over-sensitive automatic brightness setting, which responds to every sunbeam or shadow with sweeping, drastic changes. I turned it off as quickly as I could find the setting. 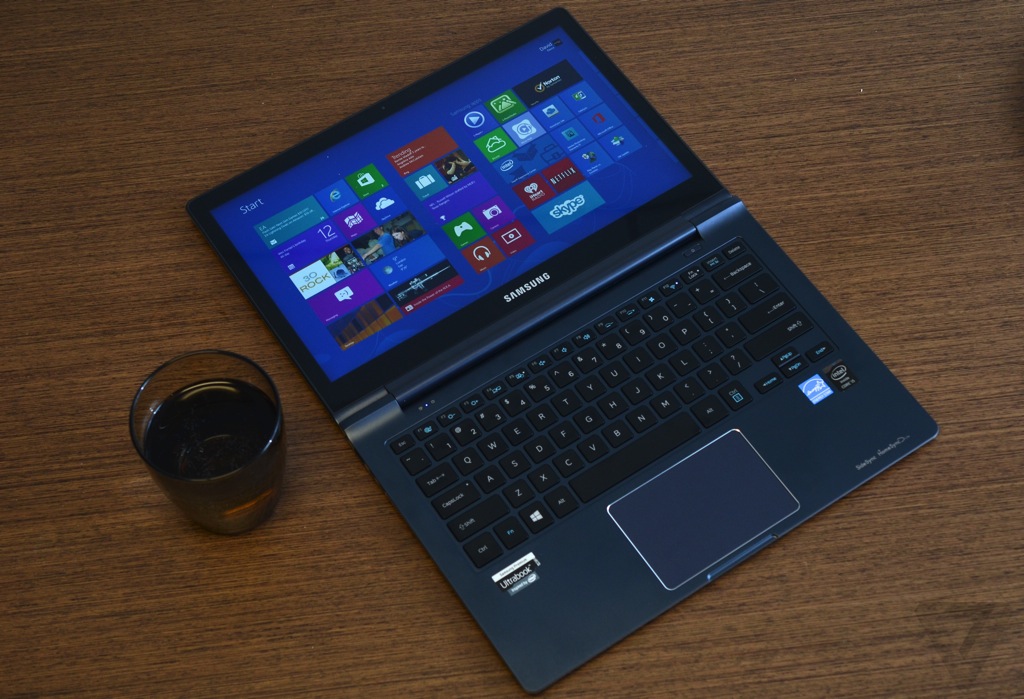 Samsung has a checkered past building keyboards and trackpads, but it’s clearly learning as it goes — it has two years of experience on this chassis, and it shows. The Book 9 Plus’s keys are still a bit shallow and harsh, with a hard bottom at the end of every keystroke, but the experience has improved immensely over last year’s model. I picked up the Book 9 Plus and was typing at full speed in no time. The aqua backlight is even and almost beautiful. It's much cooler and easier on the eyes than the stark, white Apple light. I still don’t like the differently colored function keys, though at least there are plenty of them, and I really don’t like that they’re the secondary functions on their keys. Samsung’s Fn Lock button is a nice idea, flipping the controls so F3 actually changes the brightness — but that turns the Up key permanently into PgUp, which is a recipe for disaster. But still, I can’t live without a good keyboard, and the Book 9 Plus has a very good one. 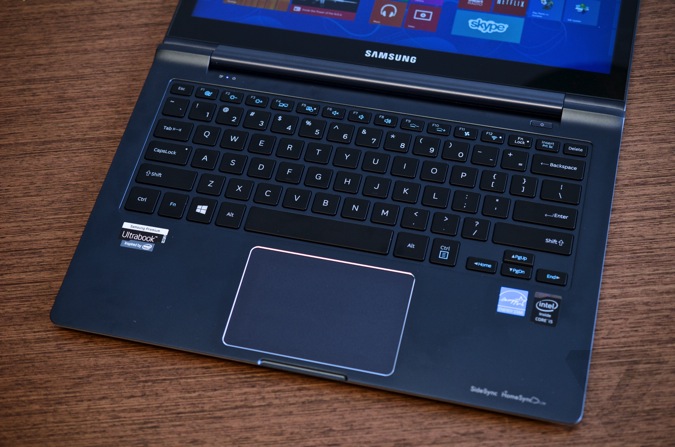 It also has one of the better Windows trackpads I’ve used, though that’s admittedly a low bar. From a hardware perspective, it’s perfect: smooth and glassy, with a responsive clickpad and just enough of an edge that misplaced gestures are all but impossible. The software can still be a bit jumpy, though, especially with gestures — the Book 9 Plus seems to be constantly waiting to switch between apps, often doing so when I just wanted to move the cursor a little to the right. There are no massive frustrations, only little ones like that; Apple’s experience is still far more efficient, but the Book 9 Plus is solid.

That’s really the whole story of the Book 9 Plus, at least from a hardware perspective. It’s not quite on the same level as the MacBook Air, or the Acer Aspire S7 — it has a few keyboard and touchpad issues, its palmrest becomes discolored with fingerprints and its lid does scuff easily, and the device just doesn’t have the same unblemished unibody look as Apple’s laptop. But it’s close. It’s thin, and light, and handsome, and it’s more than good enough. 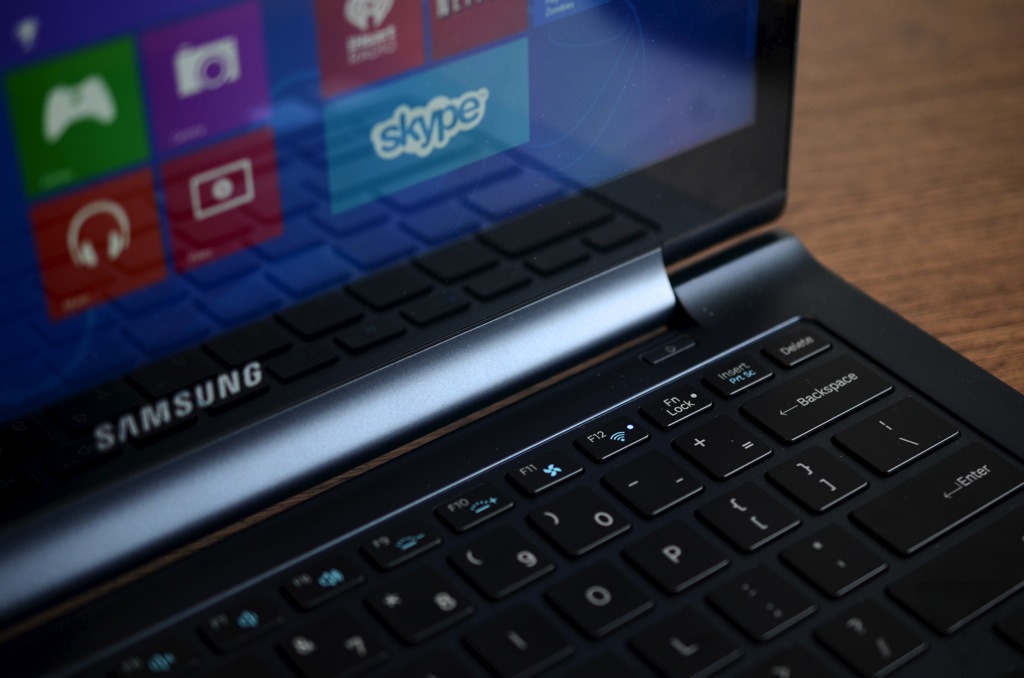 A PC, first and foremost

Samsung bundles a standard set of apps onto the Ativ Book 9 Plus, from Netflix and iHeartRadio to Samsung’s own Music Hub, S Player+, and S PhotoStudio — they're mostly useless but harmless. There are also plenty of Norton and Intel popups reminding you that unless you unlock the full version of their apps your computer will be immediately and irrevocably riddled with viruses. This is an all-too-common practice for Windows manufacturers, but Samsung’s no worse than any other.

The software's a little aggressive, and the branding's out of control

It’s curious, though, that Samsung picked two relatively niche features and imbued them with such importance that they’re not only pre-installed on the machine, their names are etched into the Book 9 Plus’ palmrest. One is SideSync, which lets you pair your computer with your Samsung Android phone and mirror your screens, data, and apps — it’s really cool, and means I can type text messages from my laptop, but it’s hardly a feature everyone will use. Neither is HomeSync, which turns your Book 9 Plus into something like a media server and allows other devices to access files remotely. Again: neat, and useful in places, but not exactly a feature I want to be reminded of every single time I open the laptop.

Ultimately, none of the software is truly a problem (at least once you get past the first dozen pop-ups), but it does the Book 9 Plus no favors. The laptop itself feels cared for, like Samsung spared no expense and sweated every detail; the software, the stickers, the excessive branding all work against such thoughtful design. 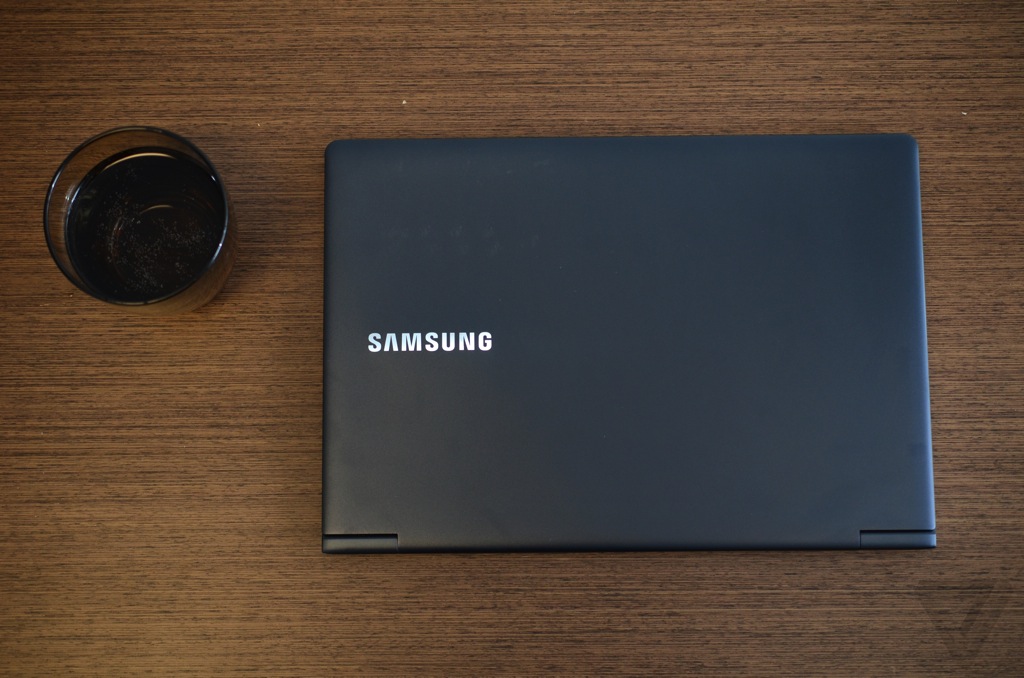 The base, $1,399.99 Ativ Book 9 Plus comes with Windows 8.1, plus Intel’s latest Haswell processor (a Core i5, clocked at 1.6GHz), 4GB of RAM, a 128GB hard drive, and Intel’s integrated graphics. Most specs can be upgraded (though it gets expensive in a hurry) but even in this iteration, it’s pretty powerful. It boots in only a few seconds, and resumes instantly from sleep.

Not overpowering, but more than capable

It flips between a dozen apps with no lag or stutter, handles my ridiculous penchant for opening 60-some browser tabs at a time, and plays high-definition video without so much as a jitter. It never gets more than a little bit warm, thanks to slightly overactive fans — they kick in for seemingly no reason, though only at a gentle hum. Gaming, as with most ultrabooks, is a non-starter — things look okay at low resolutions and low settings, but even then it’s not a great experience. Crank Batman: Arkham Origins up to the Book 9 Plus’ native 3200 x 1800 resolution, and it’s like thumbing through a flip book. Slowly.

Still, this is one of the most media-friendly laptops I’ve ever used. The screen is gorgeous, and the speakers are shockingly good. Sound is loud, and full, and has some actual range to it — most laptops make bands sound like they forgot about half their instruments, but the Book 9 Plus lets them shine. It made me wish for a larger storage option, actually, since the laptop’s so good for watching movies.

It also makes me wish for a lot more battery life: the Book 9 Plus lasted 5 hours, 36 minutes on the Verge Battery Test, and about five hours even in normal use. That’s what I'd expect from an ultrabook two years ago, not what I’ve come to expect from a supposedly best-in-class Haswell ultrabook. And when the 13-inch MacBook Air lasts more than 13 hours on a charge, settling for less than half the longevity is a pretty big problem for Samsung. 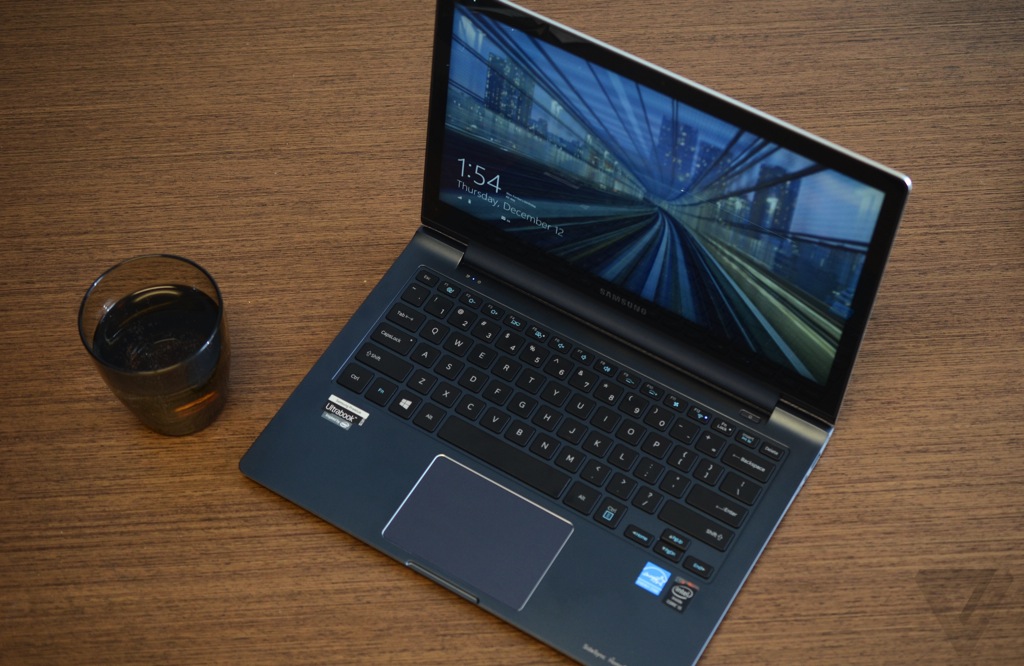 A great Windows laptop, but nothing truly sets it apart

I almost can’t believe the Ativ Book 9 Plus comes from Samsung. As nearly every PC manufacturer hunts for whatever the next form factor will be — a hybrid, a convertible, a transformer – I’d have expected Samsung to be first into the fray.

But despite its overbranded software insanity, Samsung’s not trying to be weird, or different, or futuristic. It just built the best laptop it could, and at virtually every turn hit the nail on the head. A great laptop doesn’t need to become a tablet, or detach, or spin and swivel. It needs to have a great trackpad, a great keyboard, a great screen, great performance, and great battery life. The Ativ Book 9 Plus checks virtually every box — Samsung’s made a laptop that I can recommend to almost anyone that can afford it, as long as battery life isn't at the top of your wish list.

Acer, Toshiba, and others make great ultrabooks too, though, even as they experiment with wild new designs. And the MacBook Air, still the gold standard both in battery life and industrial design, is a full $300 less than the Book 9 Plus. Even the 13-inch MacBook Pro with Retina display is $100 cheaper — and it has better battery life too.

No one’s yet figured out how to make a great “hybrid” device, or even what that’s supposed to look like or how it’s supposed to work. But more and more companies are learning how to make really excellent laptops. Add Samsung to the list.