But a patent application alone is no cause for panic

Source US Patent and Trademark Office | Via Eater

News of an Apple patent dealing with restaurant orders and reservations sent OpenTable's stock down by 3.51 percent this morning. OpenTable is the leading player in online food reservations, and investors clearly (and quickly) grew worried about the idea of Apple encroaching on its territory. Patently Apple was first to report on the filing, which is titled "Systems and Methods for Processing Orders and Reservations Using an Electronic Device." In fact, Patently Apple went so far as to brazenly declare that Apple had invented its own restaurant reservation system. That's a headline that could understandably cause some unrest among OpenTable's backers. Unfortunately, it's also not entirely accurate.

What the US Patent and Trademark Office released today is one of countless Apple patent applications (routinely made public on a weekly basis). And while there is some overlap with OpenTable's business, there's no indication that Apple's idea poses any imminent threat. It may never make its way to iOS at all. Applications almost always change significantly before a company is formally awarded the patent it's seeking, and this is likely to be no exception. Especially when you step back and look at how overly-ambitious it is.

Above all else, Apple's patent application is about efficiency. The company starts off by highlighting everything that's wrong with current, more traditional methods. "Ordering is completely dependent on the waiter's availability," reads the introduction. "A busy waitress may not get around to a customer who is ready to order for five or ten minutes. This idle time is magnified if the waitress is busy and unable to provide menus to the customer for five or ten minutes after the customer has been seated." Thus, Apple concludes, "there is a need for improved techniques for processing restaurant orders and reservations."

Apple's system uses mobile devices to fix this. As the 21 claims outline, its cloud-based solution would help businesses maintain a more efficient wait list for "physical resources" like a restaurant table. It would do so this by dynamically updating wait times based on what a customer orders — or "mapping a physical good in the order to an estimated consumption period" as claim 14 says. Explaining further in the abstract, Apple says, "The estimated consumption period can include a plurality of estimated time segments, such as the period of time to process an order for the item, create the item, deliver the item, and consume the item." Real-time notifications would alert pending customers to any changes in wait time. 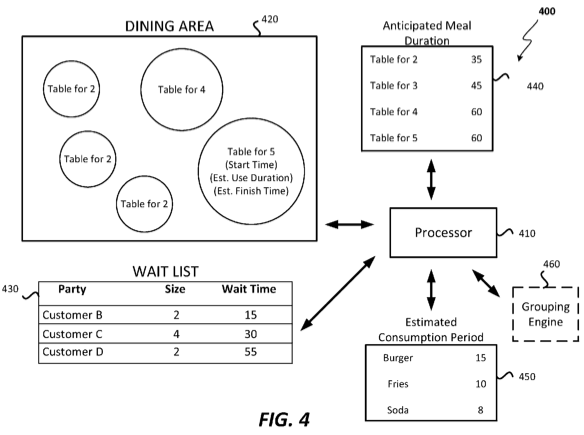 OpenTable doesn't have to worry about traffic at a restaurant; it simply books you a reservation at a given time. (Remember also that OpenTable's services are integrated within Siri, so Apple seems to think it does a satisfactory job.) But Apple does outline its own reservation system in the application. Claims 10 through 13 reveal that customers could search for local restaurants based on ethnicity, preferred time availability, distance, or all of the above. As for the ordering side, Apple envisions mobile devices being used both to place orders and ultimately pay for the check — though none of this is mentioned in the claims. You'd even be able to order and pay in advance of sitting down, according to the filing's abstract. Users could set up personal profiles to prevent mixups; you'd be able to specify food allergies so that offending dishes simply wouldn't appear on the menu, for example. 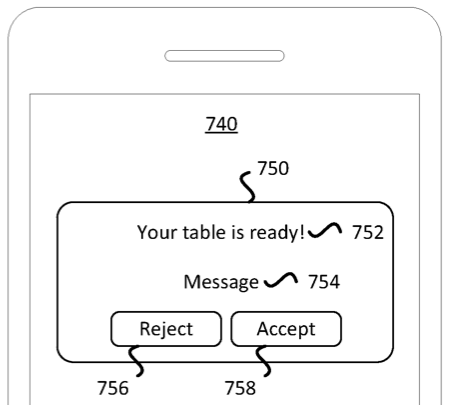 But crucially, Apple never specifically limits this system to restaurants; that's simply a convenient example for the application. The company says points of interest could also include movie theaters (a segment that Fandango currently owns), and museums. But the use cases get even more ambitious than that; Apple says its idea could help make auto repair reservations more efficient, secure your tee off time at a local golf club, and revolutionize the way you make appointments with your barber.

Before any of this could ever succeed, businesses would need to adopt and implement this system, training employees and customers to use it. There's another, more important step though: Apple needs to actually build it first. An awarded patent doesn't make that a certainty, and again, we haven't even gotten there yet. This is just an application. An application that's likely to change and narrow in scope over time. The OpenTables and Fandangos of the world have no cause for panic — not yet, anyway.