According to Oculus Rift inventor Palmer Luckey, virtual reality is near and dear to Marc Andreessen’s heart. Twenty years ago — before he created the Mosaic web browser — Andreessen was a college student working in a virtual reality lab, just like Luckey himself. But that’s not why the Andreessen Horowitz venture capitalist decided to invest millions of dollars in Oculus today. The company showed him a new version of the virtual reality headset — and a new vision — that reportedly blew him away.

"I looked at him and said, what do you think? Are you ready to change the world? And he said absolutely, let's do it. It was pretty much unanimous, right then and there," Oculus CEO Brendan Iribe tells The Verge.

"For me, it was up there with the first time I saw Apple II, Mac, the web, Google, iPhone," writes Chris Dixon, Andreessen Horowitz partner and new Oculus board member.

A better Rift at CES

What Marc Andreessen and Chris Dixon saw was the culmination of what Oculus plans to unveil at CES this year: a prototype version of the Oculus Rift headset that the company claims will no longer make people sick when they use it. It’s higher resolution, lower latency, and effectively eliminates the motion blur of the original $300 dev kit that went on sale last year. And importantly, it now incorporates full positional motion tracking so the headset actually knows where your head is located.

Update: While Oculus founder Palmer Luckey originally told us the company would show a new prototype at CES with full positional tracking and greatly reduced motion blur, the company says it will not show the same exact demo it showed to Andreessen Horowitz. The company wouldn't confirm which features will be ready to show at CES and which will take longer. 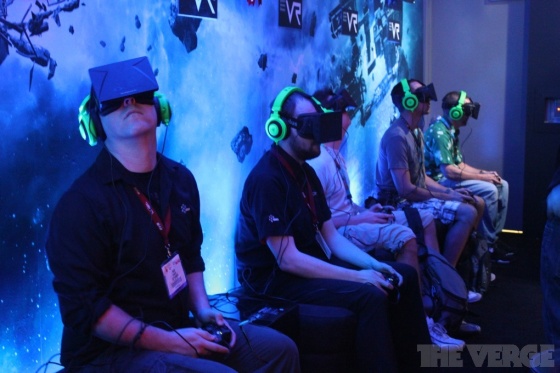 "[Full positional tracking is] one of the things that’s really going to help with the motion sickness," says Luckey. "Right now we’re basically faking head translation … it only really works if you sit in a chair, hold your back completely still, and just move your neck around." With positional headtracking, Oculus users will be able to lean forward, lean back, get closer to objects, and actually move around in 3D space to some degree. "You never have a mismatch between what you’re doing in real life and what our sensors think you’re doing," says Luckey. According to Iribe, it’s the first time he's personally had a comfortable VR experience.

Oculus isn’t just showing the new prototype to investors. Select game developers have also been invited to try the new gear, and big names like Epic Games co-founder Mark Rein and Interplay founder Brian Fargo are already teasing their excitement on Twitter. "A few hundred people have tried this latest experience, and everyone is coming out of it saying ‘Wow, you did it,’" says Iribe.

I witnessed the future of the next generation @oculus yesterday and it's powerful. I'm a believer.

If Oculus has indeed cracked the code to making VR comfortable, the company has a seemingly unlikely partner to thank: Valve. According to Oculus, the Valve and Oculus teams aren’t actually producing competing VR headsets, but rather sharing their discoveries with one another. Oculus CTO John Carmack and Valve’s Michael Abrash, who worked together on Quake nearly two decades ago, offered a pathway for collaboration between the two companies. Now, Iribe says the company behind Half-Life has contributed some of the key elements that make the new Oculus prototype as comfortable as it is today.

However, that doesn’t mean Valve won’t still have a prototype of its own. At Steam Dev Days in January, Valve will show off a vision of virtual reality that’s perhaps even a bit grander than the one Oculus will have to offer. "Unlike us, where we have to ship a product, Valve has been able to focus on pure R&D, how good the experience can be," Iribe explains. 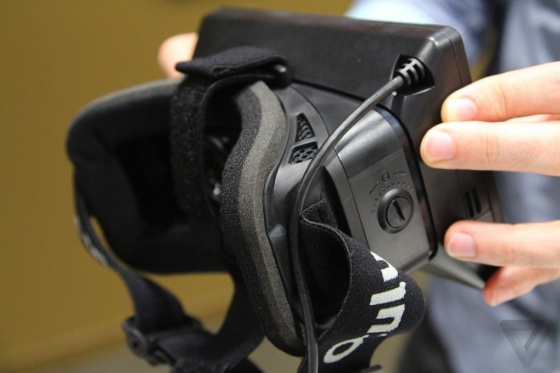 "The long-term goal is for the Rift to have some brains of its own."

But the vision that netted Oculus $75 million in new venture capital is bigger than a VR headset that works well. What John Carmack is doing at Oculus, for instance, is preparing to thrust virtual reality into the mobile world. Carmack is working on porting the Oculus experience to Android devices, and building out the Android SDK. Eventually, Oculus will build a version of Android that will run on the Oculus itself, independent of a computer entirely. "The long-term goal is for the Rift to have some brains of its own," says Luckey. While the company admits that the power of Android devices is presently fairly insignificant compared to your typical gaming PC, Luckey says the team already has demos of the Rift playing games piped in from smartphones and tablets.

Games might not actually be the primary purpose of a Rift with its own processing power, though. Luckey says he expects users to watch movies on the Rift, and perhaps even concerts. Luckey says that the company is already talking to several movie studios and a few companies that produce live events. While he readily admits that these companies might see it only as a publicity stunt, he says major artists have personally expressed interest in the idea.

Just visited Oculus and what I saw there... Wow. Just wow.

Iribe, meanwhile, says that Oculus could be a breakthrough in communication, an alternative to teleconferencing. "You can be somewhere else, but it’ll feel like you’re here," he says. The Oculus offices currently have a telepresence robot hooked up to experiment with part of that idea.

This is the tip of the iceberg for Oculus

One of the compelling uses for telepresence, however, might actually be in education, a subject that Luckey is particularly passionate about.

"One of the things we've decided as a society is that it's worth sending kids on field trips to go see things in person, whether it’s dinosaur bones in a museum or going to an old historical society," he says. "What happens when you can very cheaply send every kid in the classroom to not only see the dinosaur bones in the museum, but see a fully animated, fully modeled dinosaur as it existed back when it was alive? To have them see ancient Rome not just as the smoking ruin it is today, but how it existed through its entire rise and fall?"

It sounds like all of this and more is what Andreessen hopes that Oculus will accomplish with the new funds. "We believe Oculus will not only alter the gaming landscape but will redefine fundamental human experiences in areas like film, education, architecture, and design. Oculus is at the tip of the iceberg of its potential, and we’re incredibly excited to help them change the world," he wrote in a statement accompanying the funding announcement.

With 70 employees, 8 PhDs on staff, and now over $100 million in funding, Oculus is no longer the tiny startup that launched a Kickstarter last year. Add with the support of Valve and the talent of programmers like John Carmack, perhaps it has the means to truly deliver virtual reality to the masses without making them sick. But it’s a lot of ambition and a lot of money for a company that hasn’t actually delivered a consumer product yet, and there's plenty left to do. As Oculus likes to say, this is still day zero for virtual reality.