Twitter is still testing feature to show nearby tweets

First revealed by All Things D in April, The Wall Street Journal reports today that some users of Twitter's mobile apps are seeing a new "Nearby" timeline that surfaces local tweets. Twitter has never excelled at local discovery — location is turned off by default for tweets that users post from their phones — but the fact that the company is moving forward with testing suggests that it still has its eyes on the prize. It's easy to see how the feature could be useful, at least in theory: walking through a city, you could get a quick read on interesting events happening in the neighborhood in realtime, assuming enough users enable location tracking.

Twitter declined to comment to WSJ on specifics, but gave its usual refrain that it's always testing features through its Twitter Experiments program. Presumably, the Nearby timeline falls under that umbrella. 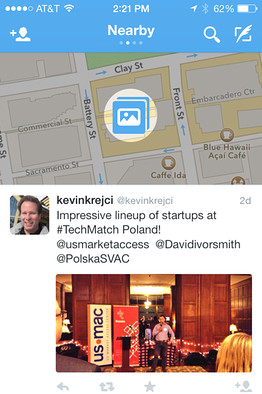