Using Google Glass with iOS is about to get far easier. Today, Google's MyGlass, the companion app that lets users configure and manage the wearable device, briefly appeared in the App Store before it abruptly vanished for reasons unknown. Prior to this point, MyGlass had been available exclusively on Android, but the pending iOS release will let Apple's customers set up their Glass hardware, get navigation directions, or screencast whatever is displayed on Glass to the iPhone's screen. MyGlass can also be used to add contacts to the device and enable or turn off specific Glassware apps.

It should go without saying, but you'll need Google Glass to get started — and that will set you back $1,500 if you're lucky enough to get an invite. Google isn't shy about underlining that requirement, warning curious App Store shoppers that "downloading this will be a waste of time" without Glass. When MyGlass does reappear, you'll need iOS 7 to use it. We've reached out to Google for details on the app's status.

Update: Google says that MyGlass will return to the App Store "later this week." Its release is scheduled to coincide with the latest monthly software update for Google Glass. 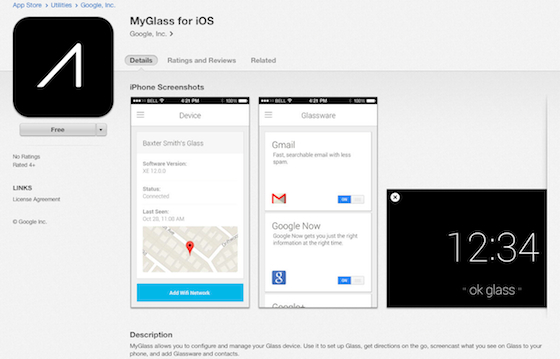