Strip mining: the rise of the world's most popular comics app

Strip mining: the rise of the world's most popular comics app

Bitstrips accidentally hit it big — after six years in development

Jacob Blackstock launched a tester version of Bitstrips in the App Store in early October. It was a "stealth" launch for friends and family to work out the app’s kinks, but the world found out. Two weeks later, Bitstrips was the no. 1 app in 40 countries and showed no signs of stopping — even though it barely worked. The app was supposed to let users quickly create humorous comic strips featuring digital avatars of their friends, but Blackstock’s servers were crashing hard. After six years the business was finally taking off.

"We suspect it’s one of the fastest-growing apps ever."

"We suspect it’s one of the fastest-growing apps ever," says Blackstock, who is known by friends and colleagues as "Ba." Like Snapchat right out of the gates, Bitstrips is charming because it’s a bit sloppy, somewhat buggy, and wasn’t manicured by a star designer born and raised in Silicon Valley. Like Draw Something, it lets users express themselves in a casual new way. It’s also viral — to date, users have created over 30 million comic avatars on Bitstrips for iPhone and Android. One such Bitstrips user is Solina Chau, one of the 100 most powerful women in the world, according to Forbes, and an investor at Hong Kong’s Horizons Ventures. Chau recently led a $3 million round in Bitstrips.

Blackstock’s hunch is that Bitstrips reveals a hidden desire that most people are too afraid to indulge. But despite (or perhaps because of) its virality, it could also be a fad — like Draw Something before it — a bright fire taking over your Facebook feed that will soon be extinguished.

Blackstock has been drawing since he could first hold a pencil and grew up making comics and cartoons, he says. "It was always a really exciting thing to make a comic for someone — but especially when you put them in it, they’d be so thrilled," he says. This idea became the central thesis of Bitstrips, which Blackstock has actually been working on for six years. In a world where the average app startups is founded by college students in a matter of months, the 38-year-old Blackstock got a bit of a late start.

He met Bitstrips co-founder Shahan Panth in high school, where they’d pass doodles back and forth in class. Some time later, Blackstock was working at an animation studio and Panth was in insurance. "I’d fax him comics of himself doing embarrassing things that I knew were going to go to the mailroom," says Blackstock. "He’d have to get there first or he’d get in trouble." Blackstock moonlighted working on a trippy cartoon called Griddleville — "Looney Tunes meets The Prisoner meets M.C. Escher," he says. Blackstock spent three years slogging away, frame by frame, on the project. "He nearly lost his mind in the process," wrote Jesse Brown, a former colleague, when the cartoon was finally finished. 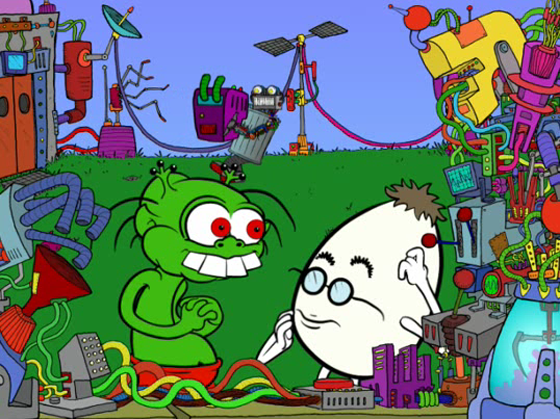 "I drew the same thing over and over again tens of thousands of times, which is part of what gave me the idea for Bitstrips," says Blackstock. Bitstrips launched at SXSW 2008 as a comic-building website. It caught the attention of teachers, who used it to sketch out comic strips for students complete with thought bubbles and captions. "Seeing it used in schools gave us insight into the power of Bitstrips as a communication medium — as people communicating through their avatars," says Blackstock. Bitstrips For Schools became the company’s first revenue stream, but Bitstrips today is very much the same.

The fun in creating a strip is expressing more than an emoticon. It's about expressing a full-body emoji, if you will, and telling a story about something that happened to you and a friend. "The subtle cues, body language, gestures — all that is missing from text," says Blackstock. "The expression in the human face can be subtle, but in cartoons it’s distilled into an iconic form." Dozens of sites sprung up filled with stories told using characters in The Sims, and Bitstrips is not so different. You get hooked customizing avatars for you and your friends, and then sticking them in unlikely situations.

The fun in creating a strip is expressing more than an emoticon — a full-body emoji, if you will

When Bitstrips became a mobile app in early October, it seemingly found the viral delivery method it needed to take off — but perhaps too quickly. Bitstrips flooded the Facebook Newsfeeds of many people, which was both good and bad news. "People starting writing about how to block Bitstrips from the news feed," says Blackstock. "It was a symptom that people really loved it, and they loved it a little too much." It’s not up to him what people post on Facebook, after all, but that doesn’t change the fact that bad word of mouth turned into bad PR. As Bitstrips expanded its team from 12 to 20 and built out its server capacity, it also added more ways to share inside the app besides Facebook.

"This is something that strikes a universal chord."

The company hasn’t yet started talking about monetization — a quiet acceptance of its newfound status as a venture-backed app startup, perhaps — but if The Sims expansion packs have been any indication, there’s a big market for booster packs that let you add hats and accessories to your avatar. But is it all a fad? Bitstrips is no longer no. 1 on the charts in those 40 countries, but it's hanging tight near the top. It has many times more downloads than the best comic-reading apps for mobile, which means that it is very likely the most popular comics app in the world.

And there’s an increasing number of communal art apps like Paper, Draw Quest, Draw Something, and even Snapchat that scratch the same creative itch that Bitstrips does — apps that don’t need translation and that seem to have appeal to all ages. Unlike most viral apps, ironically, Bitstrip’s most active age group isn’t teens — an often fickle demographic — but is instead the 18–24 group. It skews older, and that could bode well for the app.

Bitstrips got off to a rough start, offending Facebook users and glitching out for many app users, but the company’s gamble on comics, a timeless medium, is unique and fun. "The way we’ve seen it take off around the world shows that this is something that strikes a universal chord." Blackstock may be right, and Bitstrips may have finally found its success — but as countless apps like Draw Something before it have shown, viral success can be short-lived, and your no. 1 app can just as quickly get drawn off the page.