iPhone game controllers are here, but the games may never be

iPhone game controllers are here, but the games may never be

The original iPhone ushered in a new way to play games. With no control input other than a touchscreen and gyroscope, developers were forced to use touch and tilt in inventive and clever ways. It lead to wonderful games like Ridiculous Fishing and The Room 2, but all along many developers continued to strive for something different — a console-style game you could play on your phone or tablet. Without physical controls, however, those experiences never worked quite right. Even when the games looked the part, on-screen buttons and other touchscreen concessions just couldn't match the precision of an analog stick and some physical buttons.

But with iOS 7, it seemed like that might finally change. "Ten years from now, we may look back and say controller support was the most important announcement of E3 2013," Polygon's Chris Plante wrote back in June. "But only if Apple wants it to be."

Now the first wave of iOS game controllers is here, but they've yet to make much of a ripple — they feel more like a missed opportunity than a revolution. There's a lot of potential for the idea of a physical controller for your mobile devices, but we're not quite there yet.

Both Logitech's Powershell and the Moga Ace Power controller — the first two iOS controllers available — have a number of issues that will likely hamper their adoption. For one thing, they're both expensive, costing an extra $99.99 on top of what you already spent on your iPhone. For $30 more you could get an entirely new game platform with a Nintendo 2DS. And because they both double as cases that wrap around your iPhone, that means they won't work with your iPad.

But the bigger issue is games. The App Store has been around since 2008, and over the years has built up an impressive library of touch-controlled experiences. Whether it's a blockbuster like Angry Birds or indie titles like Canabalt, touchscreen games have already proven that they can be wildly successful. Given this, there's little reason right now for game developers to implement game-controller support into their projects. "This in turn leads to a classic chicken-and-egg problem," explains Canabalt and Hundreds developer Adam Saltsman. "If there's no software for the controller, who's gonna buy it? If nobody's buying it, who will make software for it?" 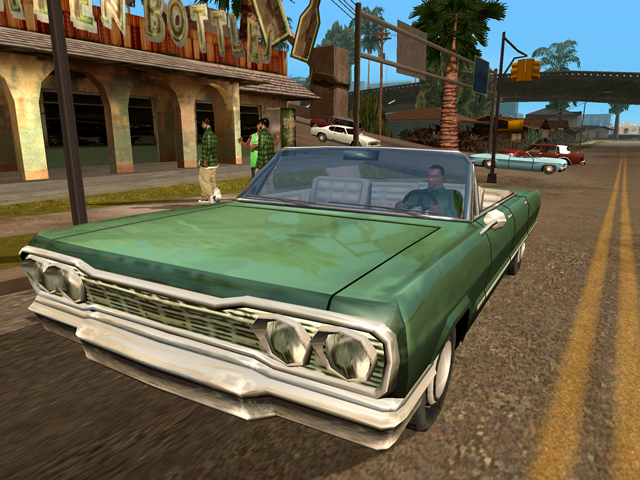 So far, the answer has been porting older games. The biggest title to support the new controllers so far is Grand Theft Auto: San Andreas, a mobile version of the PlayStation 2 classic. It's bigger and more expansive than just about any other game in the App Store, and it feels great on mobile with traditional gamepad-style controls. Developer Rockstar, however, seems much more interested in talking about the work that went into getting the game to feel right with touch, as opposed to hyping the controller support. San Andreas on iOS features three different touch-control schemes, contextual buttons that only show up when you need them, and the ability to target enemies simply by tapping them. It's a lot of work to make a game designed for a controller work with a touchscreen.

You can also play great games like Bastion and Telltale's The Walking Dead using the new controllers, but what you won't find — at least yet — is something totally new. There's nothing wrong with ports of existing games, especially when they're of such high quality. But it's hard to sell a $100 add-on when its best games are all playable elsewhere. And convincing the smaller developers behind some of the App Store's biggest hits to focus on support for these controllers will be easier said than done.

"I'd rather just make games where the controls are designed around the platform itself."

After years spent building new experiences centered around touch, many of them are convinced controllers aren't a necessity. "I'm actually getting the sense that players and developers are maturing and realizing that games don't need controllers to be good," says Trainyard developer Matt Rix. "We get rare requests to add controller support," adds Kepa Auwae, from Punch Quest developer Rocketcat Games. "I'd rather just make games where the controls are designed around the platform itself."

But just because the earliest efforts to build an iOS game controller probably won't be huge hits doesn't mean the concept is doomed. "Apple must have thought these peripherals stood a good chance of catching on since they added support for them in iOS 7," says Greg Kasavin, from Bastion and Transistor developer Supergiant Games. "And they know way more about their market than we do." It will take more than a few underwhelming third-party controllers for it to happen, however.

Apple is pretty good when it comes to popularizing new products, and it might only take one controller to make the venture successful — a controller built by Apple, backed by all of the company's marketing power, that would get consumers interested and make developers excited about crafting new controller-centric experiences. Barring a drastic move like that, and a significant change in the attitudes and demands of consumers and developers, these controllers will likely continue to languish in relative obscurity.

"I think they have an uphill battle ahead of them," says Saltsman.