Can the status quo make a comeback?

Sooner or later, the theory goes, Apple will make its move. The company will flip the proverbial switch that turns the Apple TV into a tiny video game console and mop the floor with Microsoft, Sony, and Nintendo.

But it looks like Apple still has a ways to go. The first two iOS 7 game controllers are here, and they’re not worth your money. In fact, they cast doubt on the idea that Apple really wants to build a console at all.

In June, when Apple announced its standardized game controller API for iOS 7 and a "Made for iPhone" certification program, it offered two templates for what a game controller would look like. Today, we have both. The $99.99 Logitech PowerShell follows Apple’s more simplistic design: it’s basically a really long iPhone case that adds four face buttons, two shoulder buttons and a directional pad to an iPhone or iPod touch. Meanwhile, the $99.99 Moga Ace Power swings for the fences with Apple’s more complex formula, adding twin analog sticks and twin triggers to a compact gamepad that stretches apart to accommodate your iPhone. 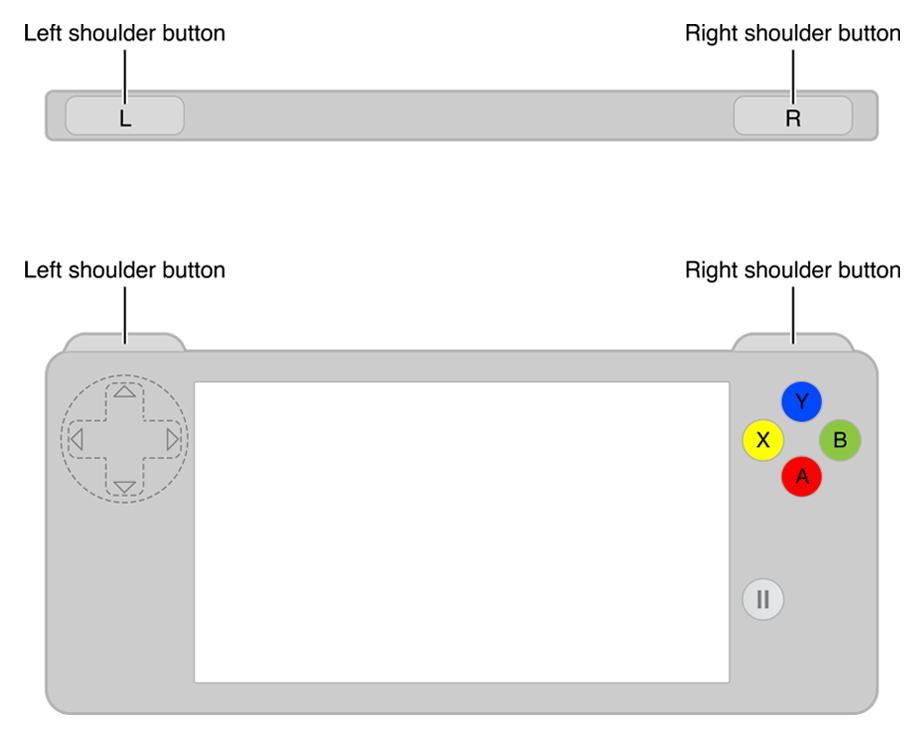 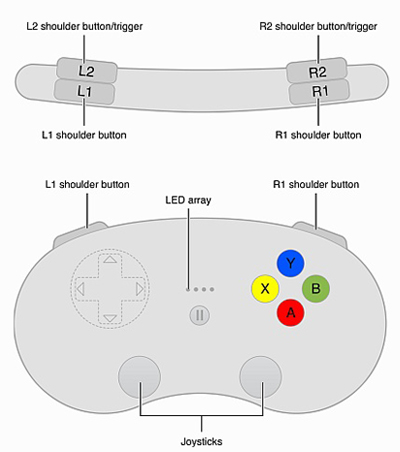 Setup is simple. There’s no clunky Bluetooth radios to pair or anything of the sort. You simply slot your iOS device into the PowerShell or Moga frame so it seats on the Apple Lightning connector, and you’re done. As soon as you jump into a compatible game, things should just work.

Sadly, the Logitech PowerShell and Moga Ace Power don’t feel like $100 game controllers. The Ace Power’s latch and spring-loaded mechanism do manage to securely hold a phone in place, but the device feels too much like a toy.

It’s a hollow black plastic contraption with a glossy finish that scratches at the slightest provocation, and rough seams and pointy corners that poke me whenever I try to retrieve my device. The heads of the analog sticks feel loose, like they might break off.

The Logitech PowerShell’s grippy rubberized surfaces feel far better at first, much more like a case than a controller, but it has its issues too. The power button toggle to wake the screen doesn’t work on an iPod touch.

If you want to use headphones, you’ll need to carry around a special headphone adapter dongle — one issue that the Moga sidesteps by routing audio through the Lightning jack itself. 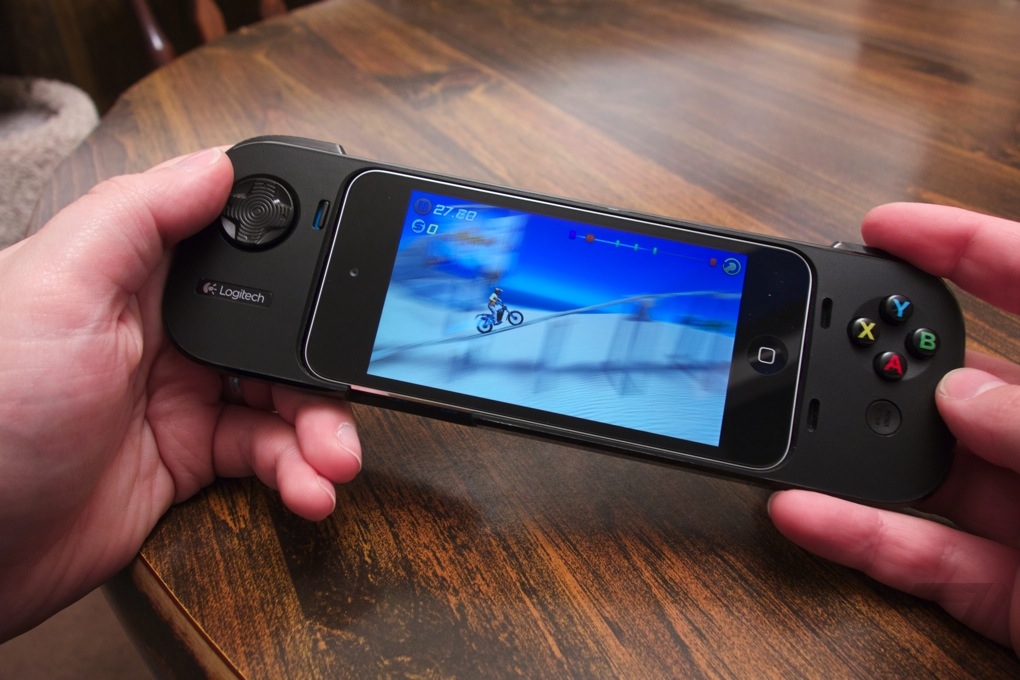 More importantly, the PowerShell and Ace Power aren’t very good at their job. The primary thing that these devices add to the experience is directional control over your games. There, Logitech fails miserably. With only a single D-pad to serve that purpose, Logitech’s job was to make that D-pad the very best D-pad it could possibly be, and it’s nothing of the sort. It’s annoyingly hard to press, and crunches when you roll it around. In games where you need to hold down a direction to keep your character walking, like Bastion and Limbo, it’s literally painful to keep pressing hard enough so the controller actually recognizes your input. On the Moga side, the sliding analog sticks and a lighter D-pad make directional input much easier, but the buttons are tiny and not well built. The triggers squish rather than having a satisfying pull, and the important A, B, X, and Y face buttons don’t reliably activate unless you press them firmly and carefully every time you use them. For $100, these gamepads wouldn’t be acceptable even if there were a library of iOS games that worked well with controllers.

few iOS games were a better experience with controllers 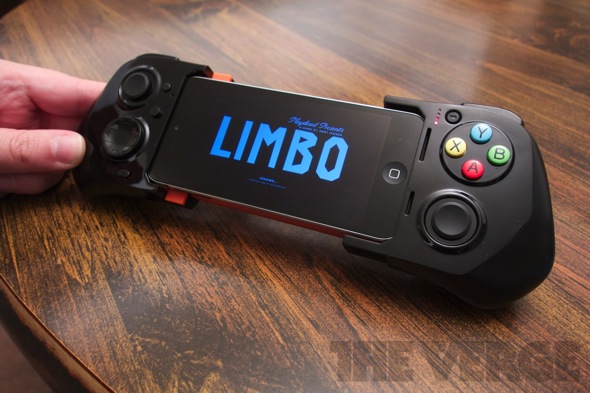 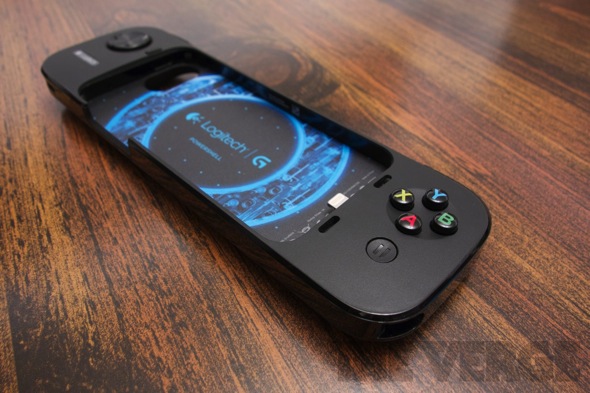 As of today, there aren’t. I went looking for all the iOS 7 controller games I could find — which isn’t an easy task since the App Store doesn’t call them out — and out of the handful of titles I found, few were actually a better experience with controllers, and many that claimed to support the devices didn’t do so very well.

Even with a controller, for instance, action flight sim Metalstorm doesn’t let you use analog sticks to fly the plane. While Air Wings automatically detected my gamepad, I had to set it up in a menu to actually use it in the game. Though Riptide GP2 and Prince of Persia: The Shadow and the Flame generally support game controllers, they couldn’t recognize these. Most worryingly, popular racer Asphalt 8: Airborne detected the Logitech but not the Moga gamepad. Many games I tried let you play with the controller, but not navigate menus to start your game, and many, like The Walking Dead and Scribblenauts Remix, still depend so heavily on the touchscreen that it’s not worth bothering with a gamepad.

Still, Dead Trigger 2 is absolutely better with a pair of analog sticks – you can actually aim – and I found games like Limbo and Asphalt 8 far more immersive without my fingers cluttering the screen. King of Fighters-i 2012 and Trials Xtreme 3 are much easier to play with a controller, allowing you to pull off more crazy stunts, and Grand Theft Auto: San Andreas really cries out for a gamepad.

A couple of games even combine the capabilities of the iPhone and the gamepad for more precise control. Sky Gamblers: Storm Raiders lets you use both of the Moga’s sticks and the iPhone’s accelerometer to control a plane’s throttle, ailerons and rudder simultaneously. But with these controllers, even those experiences are subpar. None of them felt remotely as responsive as a console, or even an Android gaming device like the Nvidia Shield. 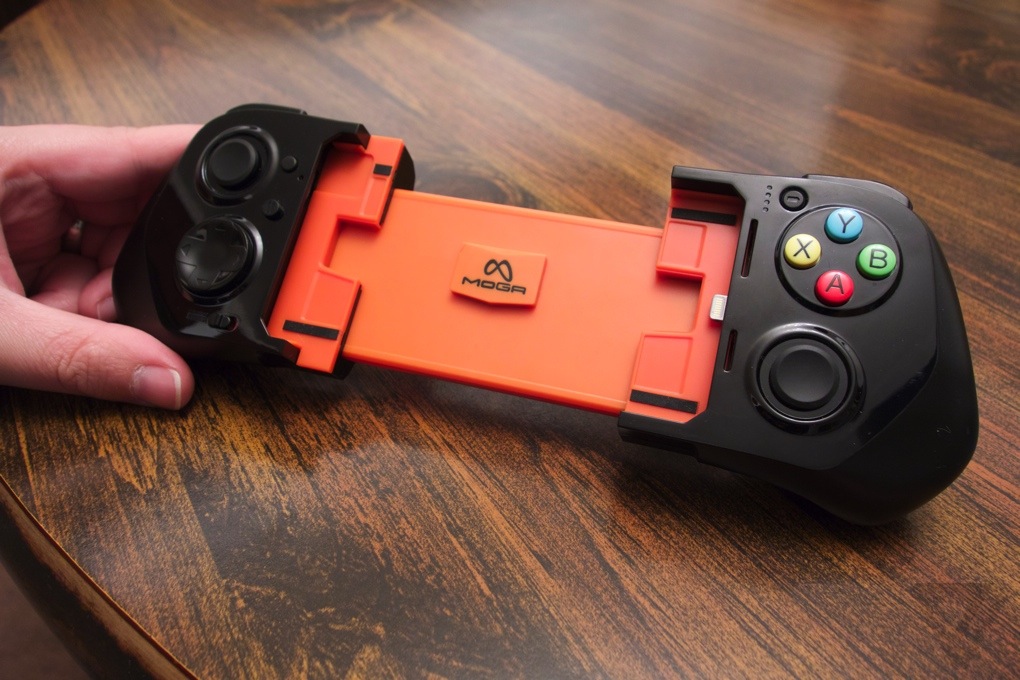 Logitech and Moga do go some way to justify the steep price of these controllers by including a battery that can charge your phone while you play. The PowerShell houses a 1500mAh pack, while the Ace Power has a 1800mAh battery. When a Mophie Juice Pack battery case starts at $80, the price makes a little more sense. But unlike a Mophie, you probably wouldn’t want to keep these cases on your phone for long.

Though the Moga shrinks down to a purse-friendly size when it’s not in use and the PowerShell feels comfortable enough in one hand, both are big and bulky additions to Apple’s svelte devices. The batteries are really just there to keep your phone topped off so you can have a few hours of worry-free gaming. They do that fairly well, but don’t expect them to charge a phone that’s dead. You’ll need to plug the PowerShell into a Micro USB wall charger to get your device to charge, and the Moga actually stops charging a connected phone as soon as you plug it into the wall. 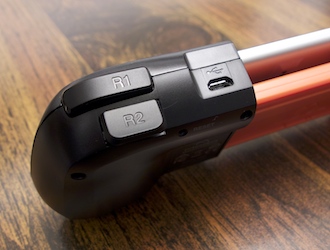 If you keep them attached to your device, you’ll be carrying around a useless peripheral most of the time. Outside of the currently limited selection of compatible games, the gamepads do nothing at all. Even with the new iOS 7 APIs, you can’t use a controller to navigate iOS 7 homescreens or scroll through your favorite websites. Unless or until that changes, an iOS game console seems like a stretch, because a standard wireless controller wouldn’t be able to launch any games. Touch is so deeply seated in iOS that it seems like you’d need a touchscreen in your game controller, and then you’re talking about a solution that’s no better, and likely worse, than what you can already do with AirPlay. When you’ve got a portable touchscreen game system you can carry wherever you go and beam to the TV at a whim, why would you want a device that’s permanently tethered to a television instead? 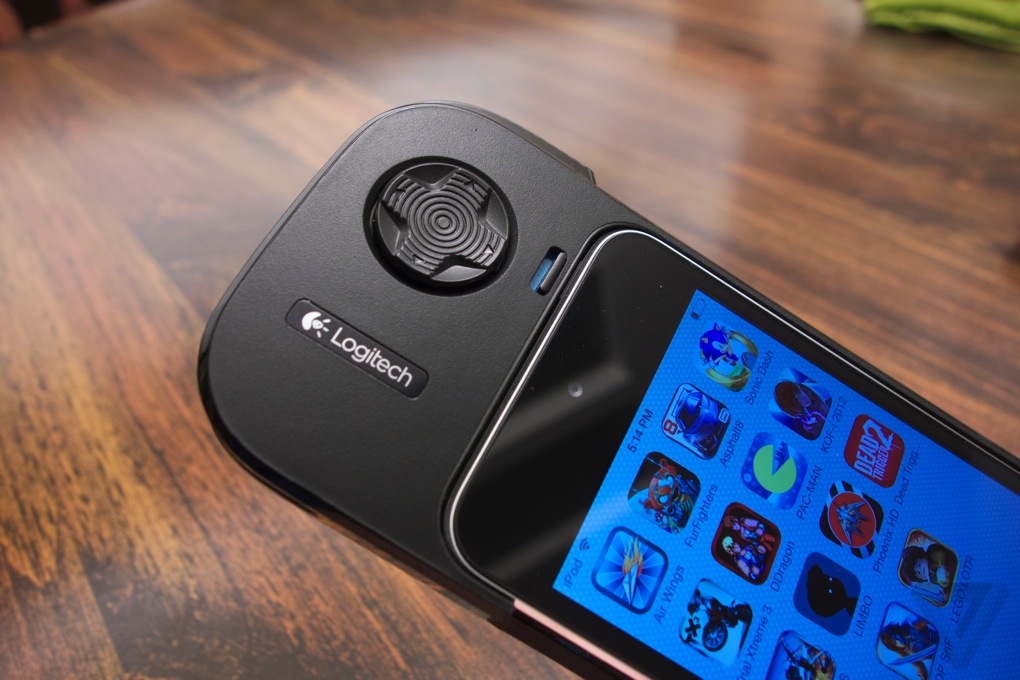 Is Apple serious about game controllers?

If I’m wrong and Apple’s serious about gamepads, the company may need to take matters into its own hands. It’s not easy to build a good game controller — Microsoft spent $100 million on the Xbox One gamepad merely to make minor improvements — and these first efforts from Logitech and Moga aren’t up to the task. While the accessory model might have worked to provide Apple with an ecosystem of cases, speaker docks, and styluses, none of those things required app developers to get involved. There’s a small sliver of Apple’s reputation at stake here if IOS game controllers fail.

Perhaps that’s why Apple never made a big deal about iOS 7 game-controller support, though. Like everything else in the accessory program, gamepads could simply be peripheral to the company’s interests, a bone to throw accessory manufacturers while it works on things that are new and different. This summer, when games like XCOM, Deus Ex and Limbo proved that console games could be at home on mobile, game controllers — and a game console — seemed like the next logical step. But wouldn’t it be better for Apple if developers abandoned the idea of a game console, and focused on building apps for Apple’s portable touchscreen game systems instead? Game controllers are a link to the past and a way to play old games efficiently on new systems, but they reinforce the status quo. That’s not something for which Apple is generally known.