Adjusting for supply and demand makes sense on paper, but fails to understand basic consumer psychology

When the snow started falling in New York City this past weekend, the prices for a ride in an Uber car began rising. It's part of the company's long-standing policy of "surge pricing": using an algorithm that raises prices to adjust for demand. Uber says the higher prices motivate more drivers to hit the road, ensuring that there are always enough cars available for customers, at least those who can afford much steeper fares. The adjusted prices, which got as high as $35 a mile, were roughly eight times the regular fare. The minimum of $175 a ride took many customers by surprise and they reacted with anger. Surge pricing happens regularly in Uber’s busiest markets, and has drawn customer outrage and media scrutiny before, including in New York during the snowstorm on New Year's Eve, 2011, and during Hurricane Sandy.

Uber CEO Travis Kalanick has always staunchly defended the practice. "Surge pricing only kicks in in order to maximize the number of trips that happen and therefore reduce the number of people that are stranded," he told Wired in a recent interview. If Uber couldn't meet demand, says Kalanick, customers would come to think of the service as unreliable, and choose to avoid it in the future. "I call it dark energy. If you are unreliable, customers just disappear."

"Surge pricing only kicks in in order to ... reduce the number of people that are stranded."

A large group of professional economists polled on this issue agree with Kalanick. When supply is tight, the thinking goes, raising prices will encourage more players to get creative about finding ways to fill that demand. The vast majority of consumers, however, do not. A study by Nobel Prize-winning economist Daniel Kahneman, Fairness as a Constraint on Profit Seeking, found that 80 percent of Americans polled thought surge pricing was unfair and unjust. This kind of popular sentiment explains why, as of 2008, no less than 34 states had passed laws against price gouging, which Uber calls surge pricing. Many of these laws are aimed at preventing a sharp jump in the prices of essential goods and services during an emergency like a natural disaster. These laws don’t make sense in a free market, many economists argue — higher prices, and profits, would encourage people to fill the demand for the scarce resource — but they appeal to our moral nature, and make good political talking points. 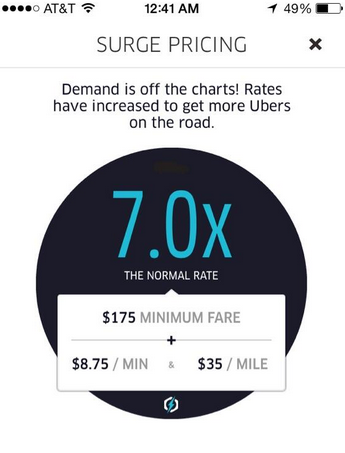 What Uber was doing may be illegal

It's here that Uber’s snowstorm surge may be on thin ice. When Hurricane Sandy took out mass transit, demand for rides jumped and Uber's pricing algorithm raised fares accordingly. Customers responded with outrage on social media. The company initially defended the price hike, saying it would incentivize more drivers to hit the roads. Eventually it backed down and reverted fares to normal. Kalanick wrote, "There are huge losses for the business in doing this initiative, but will do it as long as we can today while we figure out more sustainable ways to keep supply up while the city is in need."

But according to New York state law, what Uber was doing may actually be illegal. A statement released by the Attorney General's office specifically called out the taxi industry, noting:

New York State’s Price Gouging Law (General Business Law § 396-r) prohibits merchants from taking unfair advantage of consumers by selling goods or services for an "unconscionably excessive price" during an "abnormal disruption of the market," which would include Hurricane Sandy. The price gouging law covers New York State vendors, retailers and suppliers, including but not limited to supermarkets, gas stations, hardware stores, bodegas, delis, and taxi and livery cab drivers.This recent snowstorm was hardly a weather emergency. And Uber would likely argue that its prices are being set by the market, and aren't therefore "unconscionably excessive." But during the surge this weekend Uber riders not only had to pay a sevenfold increase in the rates per mile, but also abide by a $175 minimum. That means customers could be charged $175 for a ride that lasted a mile or two. Price-gouging penalties have been applied to gas station and supermarkets for far smaller markups.

"It puts those without high disposable income at incredible risk."

"During the past week, we’ve seen yet another example of Uber’s price gouging during an emergency situation. Uber has openly stated its intention to destroy taxi operations in cities across the country. Imagine, for a moment, that Uber is successful. Each time there’s an emergency, a snowstorm, or just heavy traffic, passengers would be forced to pay outrageous fares or be shut out of getting a ride," said Robert Werth, president of the Taxicab, Limousine & Paratransit Association, an opponent of Uber that has fought against its entry into the New York market. "It puts those without high disposable income at incredible risk, and destroys the quality of life and transportation assurances that taxicabs provide. Uber doesn’t want to serve the full community. It wants to line its pockets with profiteering."

Legal questions aside, Uber might have sound economic reasons for reconsidering its policies. Fairness isn't typically something economists and entrepreneurs who believe in the free market concern themselves with, but in this case Uber would be well served to heed Kahneman's research. That's because the customers from his study who said this kind of surge pricing was unfair also said they would avoid merchants who used it by shopping elsewhere once the supply and demand evened out. As Harvard philsophy profressor Michael Sandel wrote in his 2009 book on our perceptions of justice, "Public support for price-gouging laws comes from something more visceral than welfare or freedom. People are outraged at ‘vultures’ who prey on the desperation of others, and want them punished."