Spotify brings a clean new look to the desktop

Spotify brings a clean new look to the desktop

Spotify has started pushing out an update for its desktop client with a new aesthetic. We've tested out the refreshed app, and the starkest difference from the current version is a new darker theme; it's very dark, almost black in places, and the deep grays are accompanied by larger text across the UI, rounded graphics, and filtered artwork. The result of all the changes is a cleaner look for the app, but one that generally shows you less information. 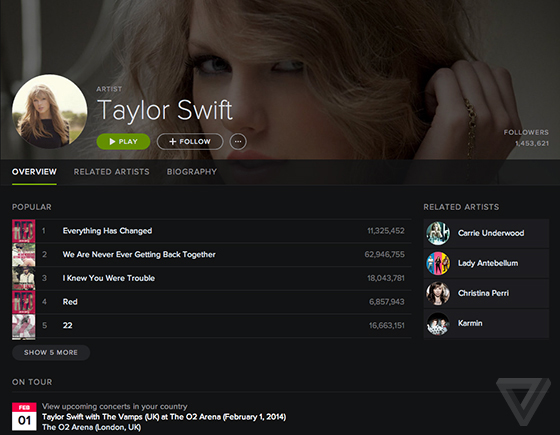 Artist pages, for example, work in much the same way as they did before. By default they'll show you less tracks on a single page, a dark filter has been applied to the 'cover' image, and each artist now has a circular avatar, but all the same information will be available to users — there's no massive interface change, just a fresh coat of paint. The changes give more of a Google+ feel, perhaps reinforcing Spotify's desire to be a 'social network' for music. 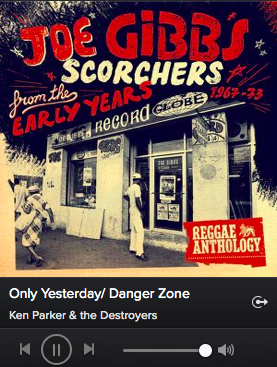 Similar tweaks have been made throughout the app, with larger fonts and more empty space added everywhere. The Discover tab has been reconfigured to display a grid of suggestions, rather than an organic mash of different-sized boxes; track sharing options have been replaced with attractive graphics; and the playback controls also have a new look. The changes make the app perhaps less intuitive than before — a square box saying 'share' is clearer than the three abstract dots that replace it — and the new look will likely take some getting used to.

Spotify has yet to detail the update — labeled as version 0.9.8 — in full, but we're hearing from a few readers that the new version is making its way to users. There's a possibility this could be a limited test before a full release, and we reached out to Spotify before writing this article to ascertain the scale of the rollout, with no reply as of yet. If this is to be a full update, the changes will be rolled out slowly to users, and there's no way — short of searching for an installer online — to manually force your app to update. 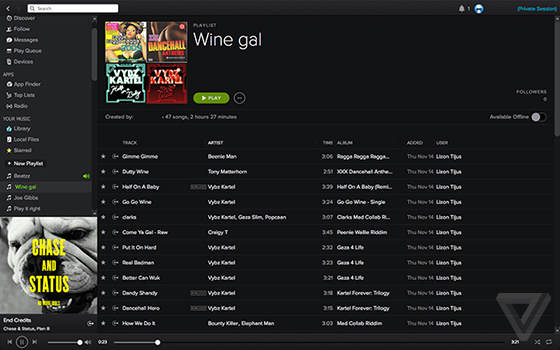 So far we've only seen the update arrive for the Mac version of the app, but we'd imagine that Windows users will see a refreshed interface soon, as the two are generally updated at the same time.

Update: As noted by Verge user Armand G, an updated Windows version of the Spotify app also appears to be on its way.