Asus appears to be readying a new 8-inch Windows 8.1 tablet. While Dell and Lenovo have similar tablets on the market, Asus’ model may have one unique advantage: Wacom support. Mobile Geeks reports that the Asus VivoTab Note 8 is expected to include an 8-inch display at 1280 x 800 resolution with Wacom digitizer support and a stylus. It’s not clear if the stylus is optional, or whether it can be easily stored away, but some retail listings for the unreleased tablet mention Wacom compatibility. Mobile Geeks also notes that Asus’ tablet also includes Intel’s latest Bay Trail processor, 2GB of RAM, and 32GB or 64GB of storage options.

While the display isn’t high-resolution, if the Wacom support is accurate then this will be the first 8-inch Windows 8.1 tablet to ship with this type of digitizer. Dell’s Venue 8 Pro launched recently, but the 8-inch tablet uses a Synaptics digitizer with a battery-powered stylus. Other rumored specifications for Asus’ 8-inch tablet look fairly standard for this type of device, including a rear 5-megapixel camera and a micro-SD slot. A recent Microsoft presentation lists the Asus VivoTab Note 8 as a "holiday 2013" tablet that’s priced at just $299. A number of other tablets have launched ahead of the holiday season, but it’s possible Asus might be preparing to unveil this particular small Windows tablet at the Consumer Electronics Show in early January. 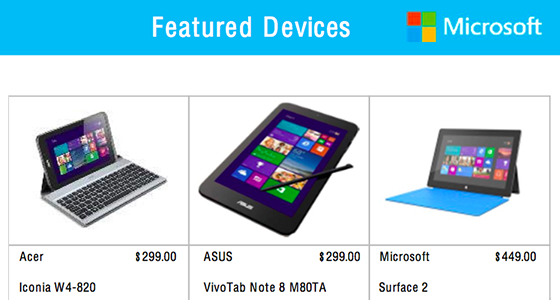