Metahaven is a graphic design collective based in Amsterdam, Netherlands. Since its launch in 2007, the team — led by Daniel Van der Velden and Vinca Kruk — has pursued collaborations with organizations that traditionally don't seek out graphic design as a platform or medium. Examples include the whistleblower platform WikiLeaks, the Icelandic Modern Media Institute (IMMI), and the diplomatic advisory group Independent Diplomat.

An interdisciplinary group of writers, editors, critics, and curators, the collective has been able to expand upon the foundation of designer as form-maker and break free from the traditional confines of the studio. Its avant-garde aesthetics and intellectual approaches have lead to exhibitions at the Walker Art Center, the Cooper-Hewitt National Design Museum, and the Museum of Modern Art in New York. Metahaven has also written extensively about the internet as a political and creative space — anyone interested is encouraged to check out the book Uncorporate Identity.

Metahaven's latest work, Black Transparency, is a short film that incorporates graphic design to make a statement about "collectivity and togetherness" in a police state, according to the group. "Many people are starting to understand that the structures which claim to serve them have turned against them."

Can you explain the work you created for WikiLeaks? How did that work differ from traditional brand-identity work?

Our initial work for WikiLeaks aimed at an overhaul of their visual presence as a matter of graphic design. We were interested in WikiLeaks as a somewhat anonymous, opaque organization publishing leaked documents — and causing great upheaval because powerful others, governments and corporations, didn’t want those documents out in the world. At the time, Julian Assange didn’t have a lot of celebrity status. He did make public appearances though, and these were mired in mystery and controversy, even as fashion statements. He addressed a freedom-of-speech working group of the European Union wearing an Icelandic sweater.

To us, all this seemed to be about reinventing what an organization is. We reasoned that obliviousness to celebrity, while doing such important work, contained a great possibility for graphic design. The WikiLeaks logo, of which we discovered the original designer, could be expanded into an ecosystem which would reflect the site’s multijurisdictional hosting model. That is a complex way of saying that WikiLeaks was hosted in many countries to make it uncensorable, and the identity should reflect that. 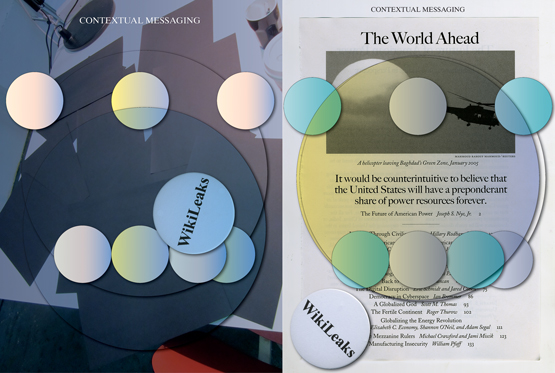 In the end, we never made a complete rebranding of WikiLeaks. When meeting with them we found out we couldn't do anything with their identity. They wanted to shape their graphic relationship to the world through products; the non-designed nature of the WikiLeaks web site is an example of their minimized reliance on external parties. 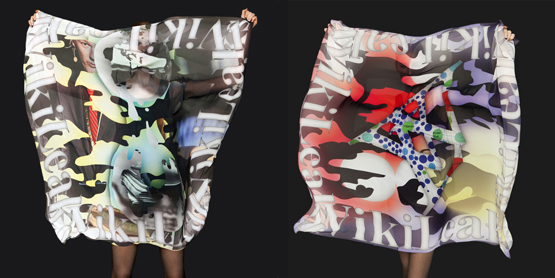 What sort of products did you design for WikiLeaks?

We primarily made scarves and T-shirts. Scarves came up as a way to make something about WikiLeaks without even touching their “identity.” Scarves are in some sense wearable flags; they can be used to conceal as well as reveal the body and the face.

What are your thoughts on the activities of WikiLeaks? Has their work affected how we view and understand information?

In a post-Snowden era, it's important to remember that although Collateral Murder is now three years behind us, WikiLeaks is where our new model for involuntary transparency began. That is, transparency that stems from leaks and not from government or corporate "transparency programs." It is impossible to even imagine our contemporary understanding of such transparency without WikiLeaks. It has sparked a movement. It can't be undone.

How have the actions of Edward Snowden changed the story of WikiLeaks in your mind?

Edward Snowden's actions are a continuation of the WikiLeaks story. The slightly problematic part of this story is the role of Russia. None of the EU countries and not even Iceland or Norway were prepared to do anything at all for Snowden, so he ended up in the only jurisdiction within reach that wanted him. On Snowden's part, staying in Russia is in his direct self-interest. It is very hard to believe that any genuine ethical concern has motivated the asylum offer. For Russia it is a means, not an end; it shows the country's cunning ability to sail the geopolitical trade winds "just because it can." Other examples are Putin's New York Times letter to President Obama, the state-owned English-language channel RT which hosted Assange's show; and more. Yet this is also the country that ruthlessly persecutes its own whistleblowers, incarcerates Pussy Riot in a prison in Siberia, and sides with Syria's Assad government. An even more stunning contradiction however is that the same Assad has an Instagram account — as Independent Diplomat's Carne Ross alerted us. 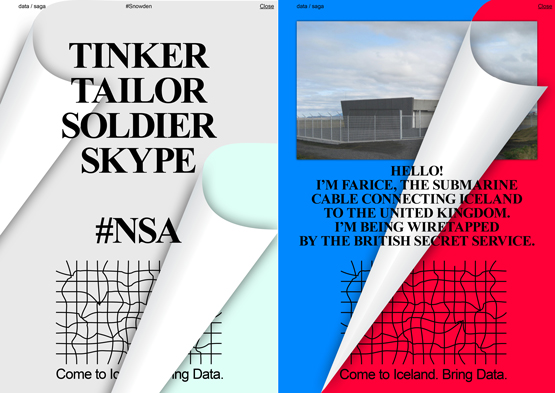 How has surveillance and transparency affected the design process both for yourselves and in general?

This is a bit of a provocation, obviously.