Where were you when Kennedy for iPhone was released?

Where were you when Kennedy for iPhone was released?

A minimalist journal that helps you contextualize your memories

There's no shortage of apps that want to help you document your life, but there are none quite like Kennedy. The critically acclaimed app Day One has carved out a niche for itself as the go-to journalling app for iOS users, offering a selection of features that allow you to log your life in private and share what you want in public. Kennedy takes a different approach, stripping away much of the interface, preferences, and sharing options that make Day One so popular, and leaving you with a surprisingly fun experience. 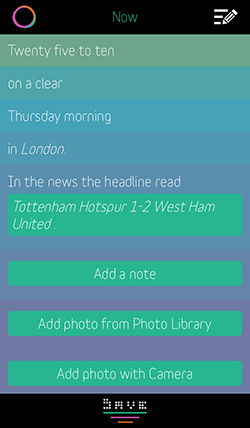 Created by designer Brendan Dawes, who previously successfully Kickstarted an accessory that gave the iPhone a physical shutter key, Kennedy's interface is very sparse. On launching the app for the first time, you'll be presented with an abstract circle containing the word "now." Clicking that circle automatically pulls in the time, your current location, the local weather, the music you're listening to, and a random news headline, which you can change from a feed containing recent articles. You're then given the option to add a note, take a photo, or add an image from your phone's library. The concept is that Kennedy helps you remember things in their correct context; it's named for the clichéd question "where were you when Kennedy was shot?"

The automation is similar to the recently released Heyday journalling app, which came out a few days after I began testing Kennedy, but without the myriad of options. There's no tweaking, no arranging, and no suggestion that you should tweet out your note out with a #KennedyApp hashtag. There's not even the option to save notes elsewhere or send them out by email. What you're left with, then, is an intensely personal experience.

Notes are saved to a simple list that's accessible with a tap at the bottom of the screen, and in the few weeks I've been using the app I often find myself scrolling through them, looking through photos and notes, reminiscing about things that happened two days ago, all the while being reminded that horrible tragedies were happening at the same time thanks to the news headline. The experience is certainly aided by the fact the app is beautifully designed. It's all held together by PlayType's Optic typeface, an ultra-stylized dot font, and while Kennedy doesn't offer the most intuitive experience at first, once you understand what each button does you'll find navigating around the app's attractive interface very simple. 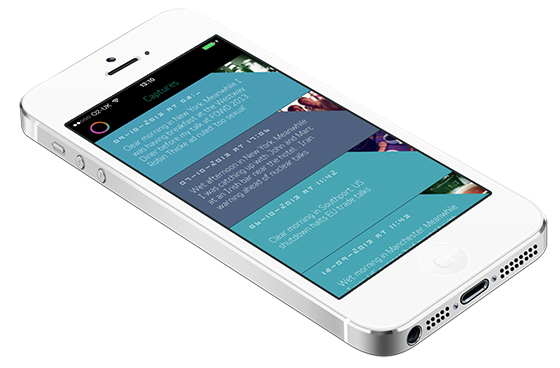 To enjoy Kennedy you'll have to allow yourself to enjoy not having control. It's a user experience that Dawes has toyed with before: his Accidental News Explorer asks you to start with a headline and ping from news article to news article without choosing a topic, and his take on a weather app has virtually no features. You'll either love them or hate them. Kennedy itself was born from a hardware experiment: Dawes created a "button to mark the now" that generated tweets based on available data, and the app is the logical progression of that idea.

As much as I appreciate the stripped-back interface, there are a couple of features I'd like to see added. If, like me, you prefer to stream your music through a third-party service like Spotify or Rdio, you'll be disappointed to discover Kennedy can only ascertain what song you're listening to if you're playing back local files or streaming from iRadio. Dawes says he'd like to get Spotify working, and also plans on integrating other third-party apps down the line, but for now only Apple's Music app is supported. 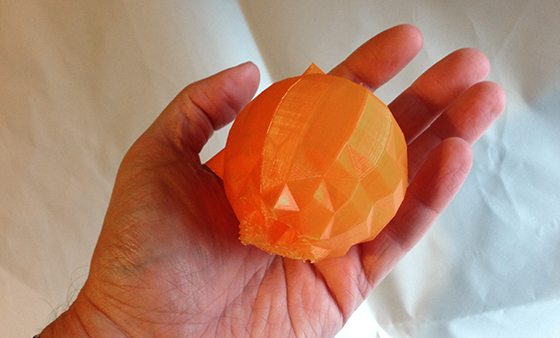 This 3D-printed sphere, which visualizes how often it rains, was generated using Kennedy data.

The final piece of the Kennedy puzzle is perhaps the most intriguing. While you can't export individual notes, you can generate a CSV or JSON file containing all your notes. Dawes has been experimenting with these files using 3D modeling and printing, and has achieved some great results. He used the database to generate a spherical visualization of how often it rains. "Nothing earth-shattering," Dawes notes, "but kind of fun."

Kennedy is available from the App Store today for $1.99.