The ILIAD project looks to amass an army of citizen scientists

The last time we caught up with Josiah Zayner, he was busy devising a musical instrument that produces melodies based on the reactions of plant proteins to light. Now Zayner, a biophysicist and incoming synthetic biology fellow at NASA, has set his sights on a project with the potential for greater public impact: one that aims to rapidly accelerate the discovery of new antibiotic compounds.

Along with Mark Opal, a neurobiologist specializing in drug development, Zayner has launched The International Laboratory for the Identification of New Drugs (or "The ILIAD Project"). The idea behind ILIAD is remarkably simple: instead of relying on research institutions and pharmaceutical companies to come up with new antibiotics, ask citizen scientists to do it instead by having them test specimens like plants and insects for antibiotic properties. Indeed, heaps of conventional antibiotics owe their existence to nature: penicillin is derived from fungi, and a promising drug devised from the Chinese plant red sage is currently in clinical trials.

Test specimens like plants and insects for antibiotic properties

"When Josiah first told me about this idea, I thought it was bullshit, because I know how hard drug development is," Opal says. "But [looking to nature] is one main way antibiotics have been discovered in the past, and I really think that crowdsourcing has the potential to give us big advantages."

In particular, the two note, antibiotic development has slowed to a crawl in recent years. A report published earlier this year by the Infectious Diseases Society of America warned that the pipeline of new antibiotics was "on life support," with only seven drugs in advanced stages of development to treat multidrug-resistant gram-negative superbugs. That's in part because, unlike drugs prescribed to treat chronic conditions, antibiotics are only taken for a few days or weeks at a time — meaning they're less profitable for pharmaceutical companies. In the meantime, antibiotic resistance continues to spread, with the CDC cautioning that over 23,000 Americans die each year as a direct consequence of the growing scourge. "Resistance is a really scary thing, and it's starting to affect just about everybody," Zayner says. "If you just look at the news, you know this is something we should be doing more about." 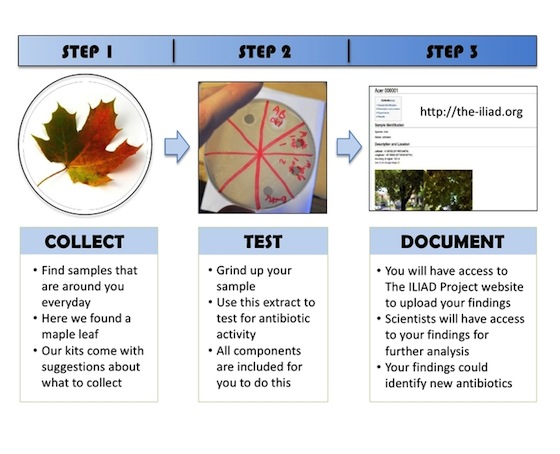 "Resistance is a really scary thing, and it's starting to affect everybody."

ILIAD won't solve those problems on its own, the two acknowledge, but they hope to put a dent in them — all while raising public awareness about the threat of antibiotic resistance. To participate, users can sponsor ILIAD on Indiegogo to procure a testing kit ($42 will get them a basic package, while $500 will yield a classroom kit designed for groups of students). From there, they select "specimens" in their local environment for testing, crush them up using the kit's mortar and pestle, and then deposit those samples (combined with a growth medium) on testing plates along with a dollop of non-pathogenic E. coli. Within several hours, users will be able to see if their sample is encircled by a white ring — an indication that it's able to fend off the growing E. coli bacteria. They'll also be able to compare the sample's potency to that of an antibacterial control on the same test plate.

If someone using the kit does spot a promising specimen, they can submit a sample of the substance in question to ILIAD leaders. They'll pass it along to a network of scientific collaborators (potentially including experts at the University of Chicago and Appalachian State University) for verification and further study. "These guys can do a bunch of assays to determine, first of all, whether the substance has antibiotic properties, and second, what's at the root of those properties," Opal says. The odds of finding antibiotic candidates might be low, but Zayner and Opal are optimistic. "Not every compound will turn into a new antibiotic," Opal notes. "But if we have enough experiments going on, in enough locations around the world, we think it's possible that some will."

With some of the money they raise online, the two also plan to develop an interactive, Wiki-style ILIAD website — one that offers a map-based database of which substances have been tested, in which locations, and whether or not they yielded successful results. The site would operate as a one-stop shop, they hope, for professional and citizen scientists alike. "People in the community can verify your results, or identify specimens you aren't familiar with," Zayner says. "What we really want is for this to be used by people around the world."

"Imagine the breakthroughs we could have if science was available to everybody."

And if one of the project's participants does hit the jackpot with that weird-looking root they found in a nearby forest? They might not garner international acclaim, as Zayner notes that the patent system "is kind of fucked up, and doesn't acknowledge first to discover," but they will be making a valuable contribution to thwarting a growing public health risk. And for Zayner, the importance of open-sourced science is just that possibility. "I grew up during the open-sourced software movement, and computing was completely changed by that," he says. "I want science to work the same way. Imagine the breakthroughs we could have if science was available to everybody."