Share All sharing options for: The secret Hong Kong facility that uses boiling goo to mine Bitcoins

A single bitcoin is now worth over $1,000, but the process of mining for the digital currency — in which people devote computing power to facilitate global Bitcoin transactions and secure the currency's network — is growing increasingly expensive. Serious miners have started to build dedicated facilities for the sole purpose of Bitcoin mining. Journalist Xiaogang Cao visited one such center in Hong Kong, the "secret mining facility" of ASICMINER, reportedly located in a Kwai Chung industrial building.

The mine is kept at 37 degrees Celsius or below

The mine is the size of a shipping container, and filled with 1-meter-high glass tanks in which banks of blades are immersed in roiling liquid. Each tank can hold 92 blades; the blades themselves are kept at a temperature of 37 degrees Celsius or below by "open bath immersion" technology. Open bath immersion cools computer components by submersing them in liquid with a particularly low boiling point. The heat the components generate mining for coins boils the liquid, causing it to turn gaseous, rise up to a condenser at the top of the tank, and fall once again, removing heat from the components in the process. The ASICMINER open bath immersion system was reportedly built by Hong Kong-based company Allied Control, and operates at a Power Usage Effectiveness of 1.02, which "would make it one of the most efficient designs in the world."

The cooling system is state of the art, but Cao reports that the mine uses common equipment — including racks and valves — found "in local markets easily." This enabled ASICMINER to build its facility quickly and comparatively cheaply before setting it to its mining task. The tanks, when filled with 92 circuit boards, cooling liquid, and an array of racks and rails, each weigh about 200 kilograms. They're pushed into place by a forklift truck. 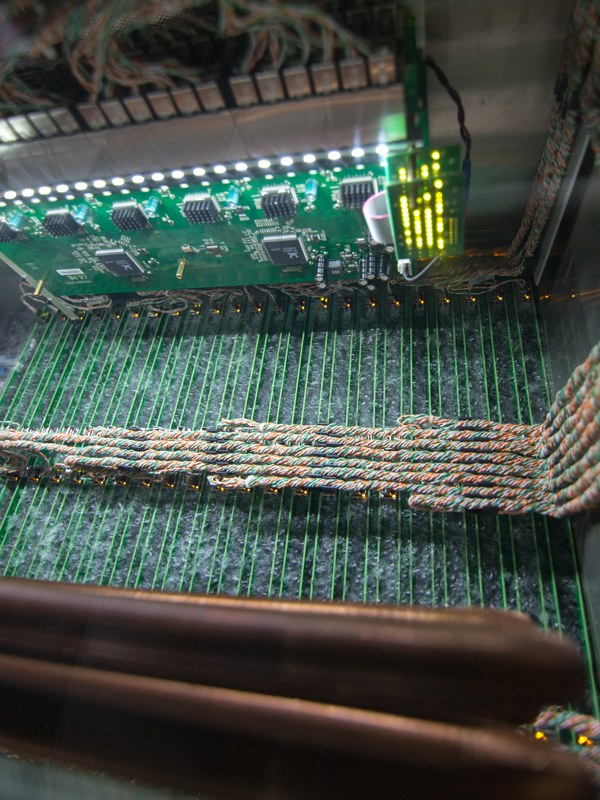 Cao says "in the Bitcoin world, time is everything." Earlier this year, the "bounty" miners earned for assisting in the computation of a new "block" dropped from 50 bitcoins to 25. In 2017, the bounty is set to drop again, to 12.5 coins. The prohibitive time, hardware, and electricity cost required to obtain these diminishing returns has already priced many hobbyist Bitcoin miners out of the market, leaving facilities such as ASICMINER's the premier way of earning Bitcoins.

Hong Kong's low energy prices make it an attractive center for Bitcoin miners, and the use of easily available components apparently helped drive down ASICMINER's costs, but the investment necessary to build and maintain such a facility is still high. Cao says he spotted unused tanks during his visit, suggesting a long-term plan to expand the center, but the lives of these mines are artificially limited. Once the number of Bitcoins in circulation reaches around 18 million in 2021, bounties paid out on block discovery will be decreased again to 6.25 coins, and facilities such as ASICMINER's will have a choice: to either continue to use their cooled computing power for negligible gains, or shut their mines down forever.

Correction: Bitcoin bounties are projected to be paid out at until around 2140, not 2024, but at a lower rate than they are now.

All about Bitcoin: the rise and trials of an anonymous virtual currency