Limited only by your connection

Share All sharing options for: Nvidia could give Shield the power of a gaming PC with Grid streaming technology

About a year and a half ago, the excitement around cloud gaming all but disappeared. Sony bought Gaikai, OnLive collapsed, and Nvidia's GeForce Grid partners failed to materialize in the United States. The idea was that you could give any old smartphone or tablet limitless gaming power by actually running the games on server farms, then stream them like a YouTube video. It seemed like an idea ahead of its time, but it actually worked — and now, Nvidia appears to be testing the waters of cloud gaming once more.

Today, the company launched an extremely limited beta of Nvidia Grid, a new cloud gaming service exclusively for the Shield. It only works if you live close enough to the company's single data center in San Jose, California. It requires a good internet connection and a fancy wireless router. It's just a test, to be sure.

But if you have all the necessary components in place, you might be surprised at just how well Grid works.

We've used both OnLive and Gaikai, and as of today Grid easily trumps both. Despite running at the same 720p resolution, the images are clearer, without nearly as much artifacting, and the controls are more responsive. Games look better and are more playable than any cloud gaming system we've tried before — which is to say that they're actually playable — and they look worlds better than any Android game that the Shield can play with its own Tegra chip. While audio still isn't perfect — the report of a gun lags behind your trigger pull — the lag of the shot itself is barely perceptible. Overall, it looks and feels about as good as playing games on a console.

Of course, the issues with cloud gaming in the past have had less to do with how well it works and a lot more to do with how well it scales: how close people need to be to your data centers, and how many data centers and server racks you need to give lots and lots of users a satisfactory experience. Ten miles from Nvidia headquarters and with what appears to be an entire miniature supercomputer at our disposal, things unsurprisingly look great. 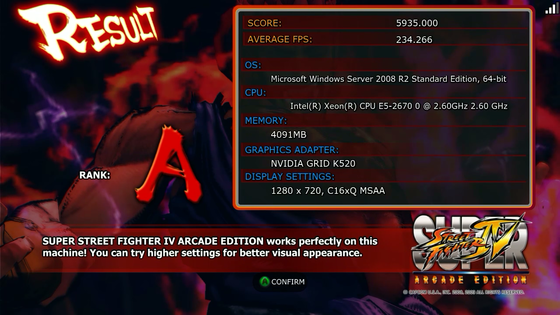 But sadly, Nvidia couldn't tell us if the company even plans to turn Grid into a product, or under what circumstances Nvidia would consider the test a success. Product manager Andrew Fear tells us that the company just wanted to see how Grid might perform with a couple thousand users, merely wanted to see if the Shield would be a good device for cloud gaming. "We felt like Shield was a smaller device, with a smaller set of users that we could control," he explains.

"We want to run it for a period of time, test it, learn from it, see if it helps us improve our hardware and software and figure out what to do after that."

"Literally, this is just our trial," says Fear. "We have nothing to announce."

A lot of trouble for a tiny test

Still, it seems like Nvidia's gone to quite a bit of trouble for what Fear claims is just a test. The company's already asking for users to tell the company where it should expand the beta next, and even has a dedicated webpage where users can watch the service roll out — if it ever does. The company's customer support site has been fleshed out with over 30 different articles to help users understand how things work, and the company already has eight games available to play during the beta period, including Street Fighter x Tekken, The Witcher 2, and Red Faction: Armageddon. The company says it plans to add more.

If you do qualify for the extremely limited beta, Fear says you should be able to play through the eight games for free. Though you can only play for two hours at a time, Fear says the trial will last at least three months and the company has no plans to delete your save games during that period. And if you aren't close enough to San Jose, you can always stream games to the Shield the way Nvidia originally intended: by hooking up your own beefy gaming PC.