The Galaxy S4 and Galaxy Note 3 may get the lion's share of attention, but that doesn't mean Samsung has stopped working on less expensive smartphones as well. Over the past several weeks, Samsung has unveiled both the Galaxy Grand 2 and the Galaxy Core Advance, a pair of lower-end smartphones that update devices it launched less than a year ago. Both are bigger and more powerful than before, but are they enough to tempt all stripes of smartphone buyers yet? 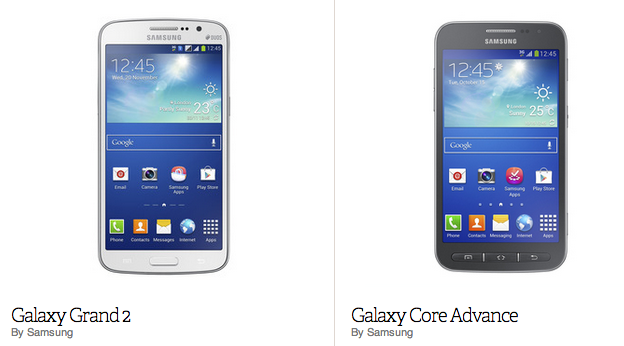 Looking up to the Note

The Galaxy Grand 2 is the more interesting of the pair, resembling the Galaxy Note in both size and style. With a 5.25-inch display, it's slightly smaller than the original Note, but it includes the Note 3's faux-leather stitching and the Note 2's curved corners. Though its display is on the larger side, it has just a 720p resolution, likely as a way to keep costs down. That's by no means bad though: even though many phones this large have a 1080p display, the Grand 2 still has a fairly high pixel density of 279PPI. But while it's edging up on the size of the Note range, the Grand 2 is still decidedly not a Note due to its lack of S Pen support.

While various reports have pointed to a release in the near future for the Grand 2, Samsung still hasn't detailed exactly when it'll come out or what it'll cost. Its predecessor, the Galaxy Grand, is currently available for a little below $300 off-contract, making the Grand 2 a potentially appealing option for those looking for a larger phone that can get by. Its internals — a 1.2GHz quad-core processor, 1.5GB of RAM, and an HSPA+ radio — aren't going to blow anyone away, but they should get the job done for the price.

The Galaxy Core Advance, on the other hand, is a little bit less enticing. It's still running Android 4.2 — while the Grand 2 is at least on 4.3 — and is a bit less capable all around. It has a 4.7-inch, 800 × 480 display, a dual-core 1.2GHz processor, and 1GB of RAM. Like the Grand 2, you won't be getting LTE here either, as it still hasn't made its way to lower-cost phones. Samsung also hasn't announced a price or release date for the Core Advance, but if its price is anything like its predecessor's, it'll be in the low $200s off-contract.

While it's an appealing price for such nice looking hardware, it doesn't quite stand out above other recent options. Nokia's found plenty of success with low-cost Windows Phones like the Lumia 520 and 525, and Motorola recently released perhaps the most impressive low-cost Android phone yet, the Moto G. Those phones all come in below $200 off-contract, and the Moto G even includes far more impressive specs. Samsung may be on the right track with larger displays and quick updates to its low-end phones, but with how exciting the competition has gotten, it may need to pick up the pace.

Most companies seem to have slowed down on product releases for the holidays, but there were still a few additions to the database this week: