The Classics are must-see, must-read, must-play works revered by The Verge's staff. They offer glimpses of the future, glimpses of humanity, and a glimpse of our very souls. You should check them out.

There has always been something special about the way Batman speaks. Perhaps it’s because, unlike many comic-book heroes, Batman has no superhuman abilities. His power lies, in part, in the aura he creates through his costume and voice. That's why my favorite adaptation of the Batman legend is one that leaves behind all the iconic visuals and translates the universe of Gotham into pure sound.

I grew up watching reruns of the campy live-action Batman TV series from the 1960s. I fell in love with the Tim Burton films, then obsessed over the animated series from the 1990s that ran on Saturday mornings and every day after school. I read the comic books and even dug into the classic newspaper strips. As I got older there was always another film or video game helping me to find my fix. But the most affecting adaptation of the Batman universe I have ever experienced is a little-known radio drama put out by the BBC based on DC Comics’ classic Knightfall saga.

Running from 1993 to 1994, the Knightfall story arc remains one of the most iconic pieces of the Batman legend because it reminds us Bruce Wayne is all too human. It introduced the character of Bane, a steroid-enhanced villain who would go on to slowly rip the Dark Knight down, mentally and physically. But what allows Bane to do so is Batman’s own obsessive, obstinate nature. The Knightfall story line has been made into a novel, referenced in the cartoon series, incorporated into several video games, and of course formed the basis of the most recent Christopher Nolan film. But for my money the BBC did it best.

There has always been something sonically special about Batman productions

There has always been something sonically special about Batman productions in a way that simply isn’t true of its peers. The kooky projectile “POW,” “THWAP,” and “ZLONK!” graphics assaulted my senses in the TV series: the whizz of a batarang or the flutter of Batman’s cape as he sped across Gotham’s rooftops in the cartoon; the instantly recognizable singsong patter of the Joker, his sinister cackle. And the terrifying transformation of Bruce Wayne’s voice once he slipped on the cowl from a playboy billionaire to a creature of the night.

The BBC production took full advantage of these tendencies for its 1994 production of Knightfall. It was directed by the award-winning Dirk Maggs and featured a cast of 14 actors, some of whom take on only a single persona and others who play out a half-dozen different villains, but all of whom embrace their roles with a full-throated abandon, slurring and rasping and shrieking their way through sinister pronouncements and violent confrontations. With criminals like The Ventriloquist, a single character shifts back and forth between multiple identities, experimenting with voices alternately comic and terrifying.

Multiple identities, madness, and the voices at war within our heads are a running theme of the BBC production. The Knightfall saga highlights the duality of Batman and Bruce Wayne by having another character don the cape and cowl. Jean-Paul Valley is a university student and, unbeknownst to him, heir to the secret order of St. Dumas. His father inculcated him with the training and personality of the order’s protector, the avenging angel Azrael. With Bruce Wayne sidelined by injury, Jean-Paul must fill in. But as he dives deeper into the role of the Batman, a single character starts juggling three — sometimes four — different personalities battling for control. 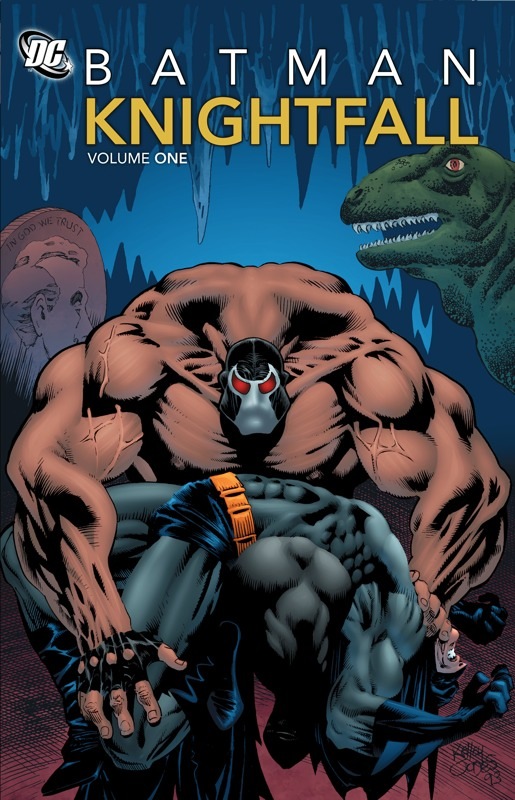 Interestingly, while the comic-book Batman depicted scenes of extreme violence, sadism, and death, for the most part the mainstream television programs and films never pushed things beyond a PG-13 rating. The BBC had no such scruples. Its Knightfall is not for the faint of heart. Crunching bones and burning bodies are treated with gratuitous audio fidelity. Listening to it as a 12-year-old, sitting alone in my room, I was terrified and yet unable to stop.

There is such a thing as too much emphasis on these voices. In the most recent films, Christian Bale deformed the Dark Knight’s dialogue to a point where it became a running joke whether audiences would be able to understand him or not, and Bane’s voice was similarly pushed to the limits of intelligibility. For Bale, it was the key to pulling off the character. Describing his audition for the role, he told reporters, “I can’t do this in a normal voice. I have to become a beast in order to sell this to myself.”

The actors in the BBC production, by contrast, never sound overdone, because with only sound to paint the picture in your mind, operatic performances seem natural, not forced. The back-breaking denouement of Knightfall — portrayed in the recent film and the seminal cover by DC Comics — is at its most affecting through radio, isolated as the sickening crackle of a slowly snapping spine.