Virtual reality check: why controllers haven't caught up to the Oculus Rift

Virtual reality check: why controllers haven't caught up to the Oculus Rift

When you put on the Oculus Rift, a virtual-reality headset, it feels like you're in another world. You can turn your head in any direction and see things that don't exist as if they were right in front of you. But the moment is short-lived. As soon as you try to move your hands, feet, or body, the illusion begins to crumble. The Rift's immersion only extends to your head. "The virtual-reality experience is not going to be complete with just the visual side," Oculus Rift inventor Palmer Luckey admits. "You absolutely need to have an input and output system that is fully integrated, so you not only have a really natural way to view the virtual world but also a natural way to interact with it."

"We don't have that, and it makes me sad," Luckey says. But as it so happens, a number of companies are already trying to fill in those gaps.

When the first Oculus Rift dev kits started shipping in March, a company called Sixense saw a second chance. Two years earlier, Sixense and Razer had teamed up to launch the Hydra, a novel motion controller that used an electromagnetic orb to track a pair of wands in 3D space. To put it mildly, the Hydra flopped. But when the Oculus Rift arrived, developers weren't satisfied experiencing VR with only their heads, and that same Hydra offered an easy, affordable way to get their hands in on the action. The formerly neglected peripheral sold out overnight and ended up moving more units over the course of the month than it had in the space of an entire year. Despite its many faults, it quickly became the de facto peripheral for new virtual reality demos. 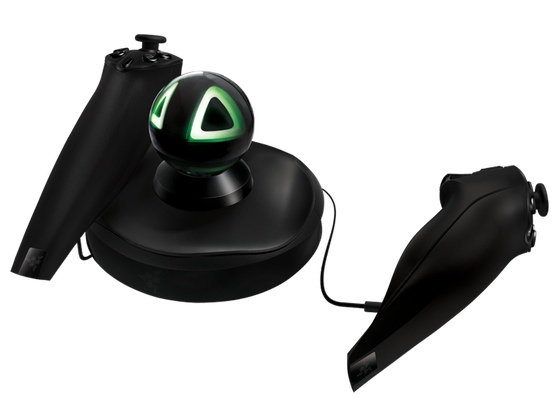 In truth, the existing Hydra doesn't make a lot of sense for VR. The controllers are tethered to a base station and have an accurate range of just 3 feet, making it difficult to even turn your body around in virtual reality. But when the Rift caused Hydra sales to accelerate, Sixense realized it could commercialize a better version of its tech: a wireless version with an 8-foot range and a custom three-axis magnetic coil that’s more compact and more cost-effective. The company launched a successful Kickstarter project for an intriguing new design: the Sixense Stem, a set of small wireless modules that could be attached to various parts of the body or placed inside larger controllers — even ones designed by other firms. Sixense CEO Amir Rubin says that anyone can use the module however they like, with no licensing fees.

That’s what Tactical Haptics is counting on. Founded by Dr. William Provancher of the University of Utah, Tactical Haptics has built a controller with a twist — literally. The Reactive Grip moves four sliding plates underneath your hand to twist your skin in ways that make it feel like you’re holding objects that don’t actually exist. The illusion of weight and tension is incredible — but to actually move those objects in 3D space, the Reactive Grip needs a motion controller like an attached Wii Remote or a Sixense Stem. Though the company’s own Kickstarter failed last week, Provancher tells us the idea isn’t dead. He’s taking meetings at CES next month to look for investments. And in the meanwhile, a number of companies including ButtKicker, Woojer, and ViviTouch are pursuing another form of haptics: specially tuned subwoofers you attach to your chair, shirt, or head to induce powerful body-shaking vibrations during your games. Another failed Kickstarter, ARAIG, imagined an entire exoskeletonlike suit where electrical impulses can force your muscles to contract in response to virtual impacts. 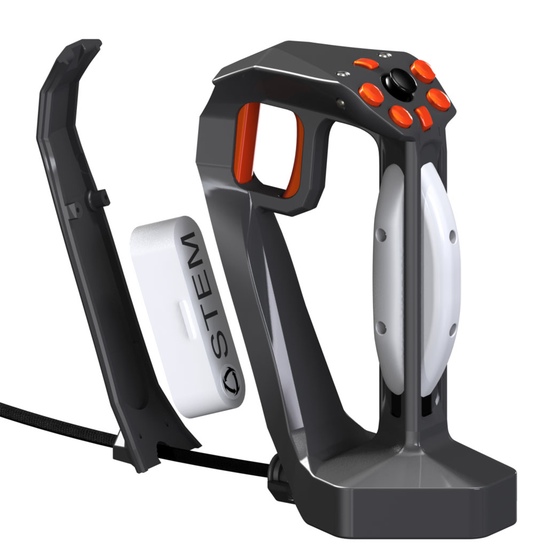 Some people don’t want to experience virtual reality with just their eyes and hands, though. "I want to walk and run and jump," says Jan Goetgeluk. He’s the founder of Virtuix, one of two startups hoping the wave of interest in VR can help them sell an omnidirectional treadmill. The Virtuix Omni and the Cyberith Virtualizer both follow the same basic idea: they combine a harness around your waist with a slippery surface under your feet, so you can rotate your body in any direction and walk or even run without actually going anywhere or bumping into anything. They’re rather expensive, starting at $499 for an Omni, and they take up a good bit of space. Still, there’s one obvious way to defray both those costs. "We get at least one email per week from someone who wants to start a VR arcade," says Goetgeluk.

The return of the VR arcade

But if you’re willing to go to a VR arcade, you might not have to run in place. Startups like Survios, VRCade and Protagonist are using the Oculus Rift in much larger virtual-reality environments — basically the closest thing we have yet to the Holodeck from Star Trek. You can actually walk around an entire room because the system can recognize your surroundings and adapt the game to match. Protagonist’s Atlas system — another failed Kickstarter — uses markers on the floor and a smartphone strapped to your chest, VRCade adds motion-capture cameras, and Survios literally straps a Razer Hydra, a PlayStation Move and an Oculus Rift to a helmet to combine multiple tracking methods.

In order to make virtual reality fit your environment instead of the other way round, so-called real-space virtual reality requires custom games — "You’re not going to be playing Battlefield 4 on this," says Protagonist founder Aaron Rasmussen — but those games can be extremely immersive as a result. Oculus founder Palmer Luckey counts "Zombies on the Holodeck" — a Survios game — as one of his favorite VR experiences thus far, shooting and slashing through zombies with the use of his full body. And just because you’re stuck in a single room in reality doesn’t mean you can’t move further in the virtual world. Survios co-founder Nathan Burba tells us that while any given section of a game might be small, you can move from one 7 x 10 foot playroom to the next with the push of a joystick.

A slew of jerry-rigged contraptions with no market

So if all these startups are building all these promising components of a complete virtual reality system, why is Palmer Luckey sad? So far, all these companies have to show for their work is a slew of jerry-rigged contraptions, and there’s no market for them yet. At the Kickstarter stage, many of these startups have already failed.

And Luckey’s not convinced that any of them are the right hardware for virtual reality yet. "It’s still so early on that it’s hard to say which of them is the best or if they go as far as they can go," Luckey says. "There are things out there that are cool, but there are other things I’ve seen, things that are not necessarily public facing yet, that are much cooler."

Of course, you might be able to say the same about the Oculus Rift itself. While he credits the Rift with pushing VR further and faster than any previous piece of headgear, Virtuix founder Jan Goetgeluk thinks it won’t be alone. "I think the head-mounted display, a year from now, will be a commodity," he tells The Verge. Several people we spoke to for this article suggested that major display vendors are working on their own solutions, hinting that Samsung and Sony are preparing their own head-mounted displays to compete with Oculus.

"The head-mounted display, a year from now, will be a commodity."

Luckey takes these comments in stride. "I do think it’s true that there will be more headsets… If we're the only VR headset on the market in five years, than VR probably isn't taking off like we'd hoped it would."

In the meanwhile, the uncertainty over which peripherals will eventually be necessary poses an issue for prospective virtual reality game developers. VR games need a controller of some sort, but each device that developers support adds more work. For now, Oculus and Sixense seem like fairly safe bets given the proven interest. Oculus has already shipped 40,000 developer kits, and Sixense is preparing for 10,000 preorders of the Stem. But even the Rift and the Stem aren’t consumer products quite yet, and the rest of the VR hardware ecosystem is a rather Wild West.

"We want people to be able to play these things."

Though Luckey doesn’t think gamepads, keyboards or mice are really the right interfaces for virtual reality, he tells us Oculus may not have a choice on day one. "At the beginning, I think we’ll focus primarily on gamepads," he says. "We don’t want to say you’re going to need a $200, $300, $400 system in addition to your Oculus Rift. We want people to be able to play these things."

But if another company doesn’t rise to the challenge and figure out how to build the right input device for VR, the inventor of the Oculus Rift says he might have to do it himself. "I specifically believe that we are going to be doing that," says Luckey.

But one way or another, we won’t be stuck with gamepads for long.