Share All sharing options for: Building a better nest: Inside Twitter's continuous redesign

It’s early evening on the day of Twitter’s holiday party, and the company’s headquarters are emptying out. Michael Sippey, the company’s vice president of product, is holding office hours in the large dining area next to Twitter’s cafeteria, meeting with members of the Twitter flock to solicit ideas and answer their questions. A few blocks away, the party venue — San Francisco City Hall — has been lit up in Twitter blue for the occasion. Tweets from the event will be hashtagged #celebrate, underscoring the triumphant year the company has just finished. Twitter’s improbable rise culminated in it becoming a public company last month, in an offering that raised $2 billion and firmly established the service as a pillar of the social internet. But while most of the company is relaxing, Sippey is still thinking through the product.

There is some reason for concern. Despite its success this year, the company’s user base grew more slowly than it hoped. At the time of its initial public offering, Twitter had 215 million monthly active users, compared with 1.19 billion for rival Facebook. Twitter’s challenge from the start has been familiarizing new users with its core conventions — following, @ replies, hashtags, retweets — and helping them continually discover content that keeps them coming back.

An evolving redesign of the company's entire range of products

It’s Sippey’s job to make that all easier. Since taking over the product team last summer, he has overseen a reorganization of the company’s development efforts designed to make the company more nimble. That effort has begun to bear fruit: in just the past four months, Twitter has introduced a conversation view that joins tweets and replies with blue lines; inserted image previews into the core timeline; and enabled photos to be sent in direct messages. Then, two weeks ago, the company redesigned its apps for iPhone and Android to let users swipe between different timelines and make messaging more prominent.

The result has been an evolving redesign of the company’s entire range of products. In an interview with The Verge, Sippey laid out the philosophy behind the changes — and hinted at the further changes yet to come. More timelines are on their way, and so are more images. Direct messages, after years of neglect, are reclaiming a more prominent place within the product. "In terms of where we want it go, we’re constantly working on that — constantly," Sippey says. "And you have to continually be revisiting that, because the world changes, consumer behavior changes, the competitive landscape changes. And you want to be able to react to that."

To understand Twitter’s new direction, it helps to remember the way the company used to build software. For most of its life, months would pass between major improvements to the product. It was a consequence of the once-ubiquitous Fail Whale: the company’s engineers were frequently working overtime just to keep the service running. But Twitter faced another hurdle to growing its user base — in a world that was rapidly shifting to mobile devices, its product teams were still focused on the web.

Until this year, a team building a new feature for the web would create it in isolation. Later, small iOS and Android teams would be tasked with implementing that feature in their apps. Facebook, notably, once faced a similar problem — it grew up on the web, and took its time adapting to a world dominated by mobile devices. Twitter started on mobile phones, but until recently oriented its product development teams around the web. "Essentially, what we did was turn that model upside-down," Sippey says. Now every team working on a feature includes mobile developers — a strategy that became possible only after the company overhauled its recruiting and training programs.

From there, like Facebook before it, Twitter built an experimentation framework into its apps for iOS and Android. That lets the product team test hypotheses by randomly selecting 1 percent of Twitter users to see how new features change their use of the product. Data drawn from those experiments gave the company new confidence this year as it set out to transform its products — and helped the team start moving faster. 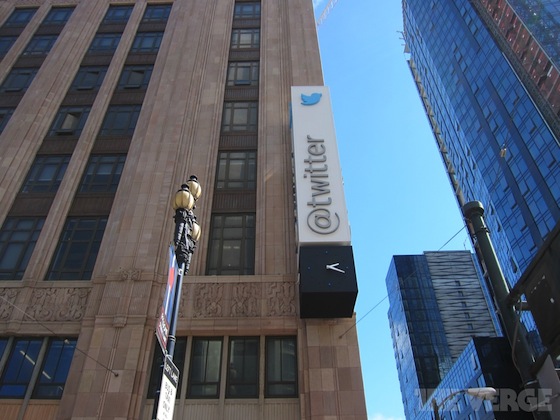 Take conversation view, which Twitter introduced in August to a mixed response. For years, it had been clear that seeing replies scattered around the timeline made Twitter harder to grok. "We knew through user research that the mechanics of conversation on Twitter were difficult for people," Sippey says. "And we know that one of the best things about Twitter are the conversations! We wanted to make it easy for people to understand that conversations happen on the product, and how they happen."

With its development team stocked with mobile engineers and the experimentation framework in place, Twitter built six or seven different treatments for viewing conversations. One version put replies on top of the original tweet instead of underneath them. Another made replies smaller than the original tweet, to give them a sense of hierarchy. Informed by data from its experiments, Twitter opted to simply link related tweets with a blue line. Some users complained, but the outcry has mostly died down. And Twitter has continued to iterate on the feature, working to make sure users don’t see the same tweet every time new replies trickle in. "It’s done great things for users and it’s been good for the product," Sippey says. "The timeline is easier to read."

The company applied a similar approach to bringing images inside the timeline. "We’ve known for a long time that great moments on Twitter typically have a photo with them," Sippey says. "People like pictures." The question was how to insert them into the timeline in a way that felt natural: "How do we make sure we maintain the rhythm of reading Twitter?" Sippey says. "And also how does it perform, and how does it drive engagement?" The team experimented with different ways of cropping photos — photos as squares, photos at full height, photos cropped to the height of a text tweet. Ultimately, Twitter settled on a rectangular crop that’s as tall as two text-only tweets. "We saw in the data that it worked for users," Sippey says.

What everyone wants to know — and what Sippey declines to say — is how these changes are affecting engagement and user growth, in raw numbers. The most immediate boost to engagement came when the company started showing action buttons (reply, favorite, retweet) without making you first tap a tweet. Sippey expects other changes to boost engagement over time — an indication, perhaps, that they haven’t yet sent it skyrocketing. Twitter is betting that it can change user behavior over time by changing their concept of what the service is. "As you see more photos in the product, you think of Twitter as a photo product," Sippey says. "Some of these things are investments in the future of where we want the product to go."

"As you see more photos in the product, you think of Twitter as a photo product."

Another one of those investments in the future is messaging. In 2011, a redesign that came to be known as #newnewtwitter moved direct messages a layer deeper in the interface; the company reportedly once considered eliminating them altogether. With the release of its new mobile apps, DMs are once again front and center. It’s no wonder: messaging apps have exploded in popularity, and WhatsApp alone boasts more than 400 million monthly users. "It’s always been a great part of the product," Sippey says. "What we want to do is make Twitter a great experience for both public conversation and private conversation — because we think the two complement each other."

The company’s redesigned apps, which it released earlier this month, offer further hints about Twitter’s future. Today you can swipe from your home timeline to Discover, which highlights popular tweets and trending topics, and Activity, which lets you know what the people you follow have been doing on Twitter. The company is already testing a tab called Nearby, which shows you tweets in your area — a service that could make Twitter more useful at a concert, a sporting event, or during an emergency.

"You want to have other experiences, depending on the time of day, or where you are, or if there’s some event happening in the world."

Many other such tabs are possible. "There are 500 millions tweets that flow through every day," Sippey says. "A lot of what you want to go experience probably isn’t in your home timeline — you can’t follow enough. You want to have other experiences, depending on the time of day, or where you are, or if there’s some event happening in the world. We want to build flexibility into the product to be able to present those collections of tweets to users."

And so the experiments continue. There are now between 30 and 40 tests running inside the mobile apps, informing a development cycle that now releases every month on iOS and every week on Android. As at Google and Facebook, Twitter’s engineers will constantly be looking for new ways to build and retain their audience, and the most successful experiments will become core features of the product. And features are likely to be introduced gradually — a break from the company’s historical approach to redesigns, when it would bundle scores of changes together and introduce them all at once. Part of that is for testing purposes: rolling changes out independently one another makes it easier to assess how each of them impacts engagement. But it’s also designed to reduce the strain on everyone using the product. "The goal all the time is to make things cognitively simpler for the user," Sippey says. "Doing it this way gives them the opportunity to learn and see the change and adapt to the change while we’re actually making the product better."

The challenge for Twitter lies in finding ways to attract new users that don’t alienate its existing base. And when Twitter users are unhappy, their judgement can be swift and relentless. Recently, an effort to improve the way users can block offensive content backfired when victims’ advocates said the changes would make victims of harassment less safe. Within a day, Twitter had reversed the changes — all that for a feature most people on Twitter have likely never used.

One thing people inside and outside the company tend to agree on: Twitter does need to evolve. To realize its vision of a world connected publicly and in real time, it has to grow quickly — and the current version of the product has only gotten it so far. But what will it evolve into, exactly? There are risks in listening too closely to experimental data, which can favor incremental change over bold new visions. Twitter sees itself as a service that makes it easier for people to connect with one another, and to discover what’s happening in the world. But how it gets there is still very much in development. The company didn’t train all those mobile engineers to do nothing. "Product teams," Sippey says, "like to ship."