The $552 billion 2014 military defense budget signed by President Barack Obama will continue to fund high-tech cyber and unmanned aircraft operations. The budget, which grants central Cyber Command $68 million in operational costs alongside more money for research and individual unit operations, instructs agencies to work towards controlling the proliferation of "cyber weapons." That means stopping the sale or spread of malicious code for "criminal, terrorist, or military activities" while allowing governments and businesses to use it for "legitimate" self-defense.

Banned cyber weapons could still be used in self-defense

In addition, the Pentagon must issue a report on how to strengthen ties with small businesses, making them more aware of threats and helping to create plans that protect networks and intellectual property. Building relationships between businesses and federal cyber operations groups has been an issue for the past couple of years, though the focus has generally been on larger information sharing agreements like CISPA. The entire American cyber defense program will also come under a more general review, with a "cyber advisor" appointed to coordinate across agencies. Cyber Command was granted around $67 million for central operations in fiscal year 2013. When its current head, Keith Alexander, steps down next spring, leadership will pass to the next director of the NSA, despite earlier discussion of splitting it into a separate post.

As the FAA works to get drones integrated into US airspace, the Departments of Defense and Homeland Security will be looking into sharing expenses for testing and training; the Pentagon will also need to work towards milestones set on the FAA's roadmap for drones, laying out what technological progress has been made and what kind of resources are still needed. While the unmanned commercial craft we'll be seeing more of in the near future will be fairly small and low-flying, the Department of Homeland Security already uses Predator surveillance drones to patrol the border. 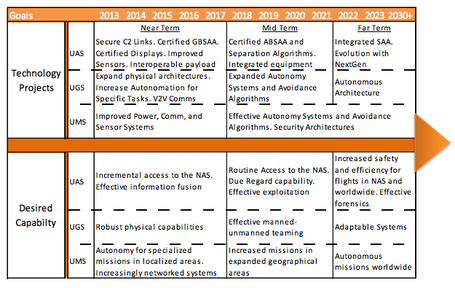 This week, the Defense Department also released its own planning document for unmanned warfare over the next 25 years. The Unmanned Systems Integrated Roadmap builds on a similar 2011 document, describing agency plans to modernize current unmanned craft and focus energy on developing a small number of new systems in the face of "austere" budgets. Modernization projects will focus on creating interoperable standards and swappable weapons, with more futuristic attack systems down the road. The report describes one of these as "nanoenergetics," a field of study using tiny particles that, when combined, have a greater surface area than their larger counterparts, creating smaller more powerful explosives that could be put on light unmanned aircraft.

The military must "take the 'man' out of unmanned."

Remote-operated technology both on and off the ground has become a major part of military operations, but the Defense Department is still weighing the options around actual autonomous craft, which could cut out human error and reduce manpower needs but pose serious moral and technological questions. Many systems can already carry out individual, preprogrammed tasks autonomously, and experimental machines can even perform complex takeoffs and landings on aircraft carriers. But real autonomy will require adapting to changing situations and carrying out missions, not just programs, without human intervention. There's still a long way to go, but the report says that overall, the military must "take the 'man' out of unmanned," cutting down the number of personnel required to operate systems through greater efficiency and automation.

In the near- to mid-term, the military hopes to build on existing routines for somewhat more autonomous robots and air or ground craft, creating things like machine "wingmen" who can support humans in a mission. Beyond 2020, they hope research will move them towards fully autonomous systems, largely on the ground and in the water: the chart above calls for "autonomous missions worldwide" for unmanned maritime vehicles (which don't have to worry about bad flight conditions or complex terrain) by 2022. To some extent, autonomous systems will develop in tandem with their civilian counterparts; the report references self-driving car initiatives like those of Google. But specifically military applications will also raise the specter of surveillance or killing machines that operate outside human control, something that has caught the attention of ethicists and non-governmental organizations across the globe.