Here's another use for your newfound holiday cash: On New Year's Day, the Mars Curiosity Rover will become an official Lego set. It's the latest success from the crowdsourced Lego Cuusoo project, which previously brought us the Back to the Future Lego DeLorean and — fittingly — a miniature Minecraft world. Now, the company's offering an articulated version of the six-wheel Mars rover designed by an actual NASA engineer who worked on the Mars Curiosity project. It'll cost $29.99 on January 1st.

No cause for concern

In other Curiosity news, the real rover scuttling about the Martian landscape has sprung a few holes. In October, Emily Lakdawalla of The Planetary Society noticed that Curiosity's front left aluminum wheel had developed a tear, and as you can see in the picture below, things have only gotten worse. "Dents and holes were anticipated, but the amount of wear appears to have accelerated in the past month or so," wrote NASA JPL project manager Jim Erickson last week, blaming the rips on rough terrain. Regardless, it doesn't seem to be cause for worry. "The wheels can sustain significant damage without impairing the rover's ability to drive," Erickson explained. 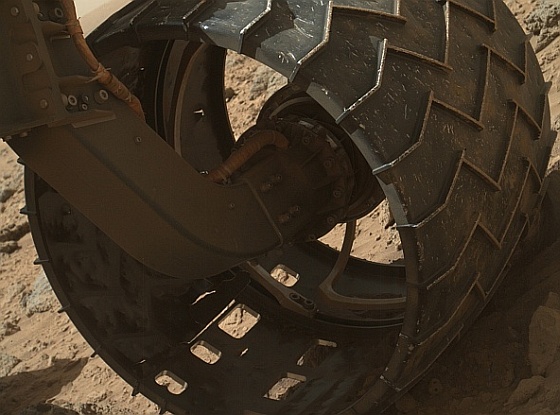 Curiosity recently received a software update from NASA, which lets the rover use its robotic arm even when the vehicle is on sloped terrain, among other things. Now, NASA plans to use the arm's camera to snap new pictures of those aluminum wheels, so that it can analyze the full extent of the damage.