Americans are bad at math and average at science, study shows

Americans are bad at math and average at science, study shows

The US has fallen further behind other countries in math education, according to a major study released today by the Organisation for Economic Co-operation and Development (OECD). Results from the 2012 Programme for International Student Assessment (PISA) show that American 15-year-olds are performing below average in math, ranking 36th out of the 65 countries and economies that participated in the survey, and 26th out of the 34 OECD countries.

Among the 65 countries, the US ranked 28th in science and 24th in reading. Performance in these categories remained close to the OECD average, with the report noting "no significant change" in any category since 2000, when the first PISA was administered. The OECD administers the PISA every three years. The latest release covers more than 500,000 students from 65 countries, which represent 80 percent of the world's economy. 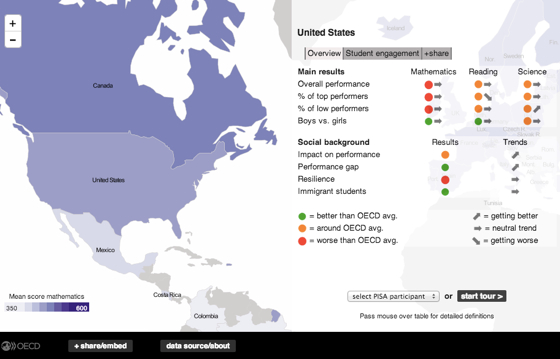 Other studies have shown similar declines in American educational performance, particularly in math and science. A 2012 study released by the Lynch School of Education and Boston College found that US fourth and eighth graders continue to lag behind in math and science, as their performance has largely stagnated while other countries have accelerated.

As the OECD notes, the US spends more than most countries on education — more than $115,000 per student — but its performance remains on par with countries that spend far less. The Slovak Republic, for example, spends about $53,000 per student, but performs at the same level as the US. China (Shanghai) and Singapore were among the top performers in math and science, joining Hong Kong, Japan, and Finland. East Asian countries performed strongest overall, holding seven of the top ten positions across all three categories.

PISA is unique in that it assesses a student's ability to apply knowledge to real-world problems, rather than the breadth of their knowledge itself. When it comes to math, American students showed particular difficulty with geometric reasoning and applying classroom principles to real-world situations.

a "picture of educational stagnation."

"Students in the United States have particular weaknesses in performing mathematics tasks with higher cognitive demands, such as taking real-world situations, translating them into mathematical terms, and interpreting mathematical aspects in real-world problems," the OECD writes in the US country note.

The Obama administration has sought to boost US classroom performance through a Race to the Top initiative that encourages states to compete for federal funds and includes stronger teacher accountability systems, yet White House officials say today's findings underscore the need to do more. Speaking to the Wall Street Journal, US Education Secretary Arne Duncan described the OECD's PISA results as a "picture of educational stagnation," and that they are at "odds with our aspiration to have the best-educated, most competitive workforce in the world."