Source Spotify for Artists | Via The Guardian

Spotify is launching tools for musicians and managers to monitor their music's popularity. Spotify for Artists is an effort to engage artists and calm fears that streaming services are bad for musicians (fears personified by high-profile names like Radiohead frontman Thom Yorke). The biggest news is a real-time analytics dashboard that tracks how often an artist's music is being listened to and which songs are most popular. In addition to these basic metrics, the dashboard also offers up demographical insights, letting artists check up on their fans' age, gender, and location. It's like Google Analytics, but for music. 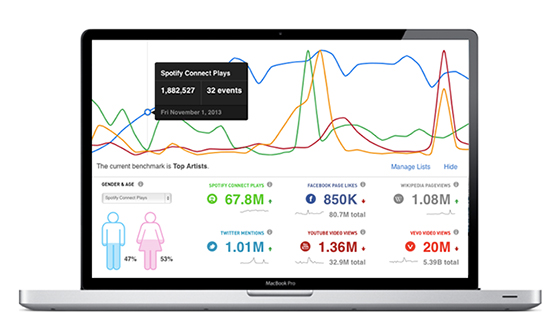 The dashboard is accompanied by a site that attempts to explain why Spotify is good for artists. It lays out how royalties are paid, what Spotify's cut is (30 percent), and how the company can help with exposure to concerts and merchandise. In the guide, Spotify acknowledges that it's "still a relatively small service" with only 24 million users worldwide. Spotify says it pays "more than two times more" money than ad-supported video services like YouTube and "significantly more" than online and terrestrial radio services.

In a convincing example, Spotify highlights what that means to artists. According to the service's figures, US streaming royalties in 2013 across all companies and platforms will amount to $503 million. If all of that streaming occurred on Spotify, that figure would rise to $1.3 billion. The basic argument is that, as Spotify gets more popular, rights holders will get the same 70 percent cut they do now, but the cut will be from a far larger revenue.

Spotify is currently targeting 40 million paying subscribers (a six-fold increase from the 6 million users it has now) moving forward, and highlights how that will affect the monthly royalties it pays out to rights holders in the diagram above. The site is full of information on what Spotify believes are the benefits of its services, including claims it reduces piracy and information of its concert and merchandising promotions. You can read about it on the publicly accessible site, or, if you're an artist yourself, you can request access to analytics at Spotify partner Next Big Sounds.