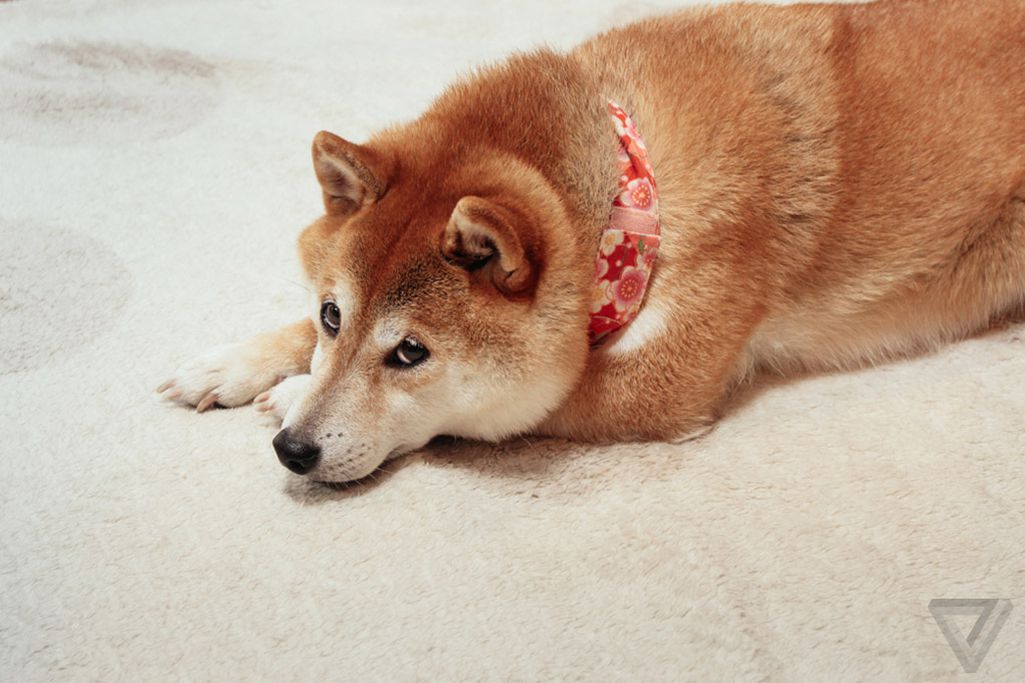 When 51-year-old Japanese kindergarten teacher Atsuko Sato started seeing strange pictures of her eight-year-old Shiba Inu dog Kabosu popping up on the internet this past August, she was a little freaked out. “I was taken aback,” Sato, an elegant, brown-haired woman given to wide smiles, recalled. “It felt very strange to see her face there. It was a Kabosu that I didn’t know.”

What Sato didn’t realize was that Kabosu had unwittingly become the face of “doge,” the white-hot internet meme that plasters photos of Shiba Inu with fractured phrases written in rainbow-colored Comic Sans type. The images often feature a “wow” in one corner, then a series of intensifiers, like “so” and “such,” paired with nouns relevant to the picture. “So scare,” “such dapper,” “many skill,” some examples read, like a surreal narrative of the dog’s inner monologue.

A snapshot of Kabosu perched on a couch, glancing sidelong at Sato’s camera with tan eyebrows raised, paws warily crossed and mouth pulled back, was suddenly Photoshopped onto a Twinkie, a giant rock, a Canadian landscape, and a Christmas sweater. The dog’s face was used as the symbol of Dogecoin, a flash-in-the-pan Bitcoin alternative popular enough to be targeted in a recent heist. Kabosu was used to mock politicians in the United States and Canada. And though she had seen some of the images online, until just a week ago Sato had no idea what the doge meme actually was.

She had just wanted to share some cute pictures of her pets on the internet. 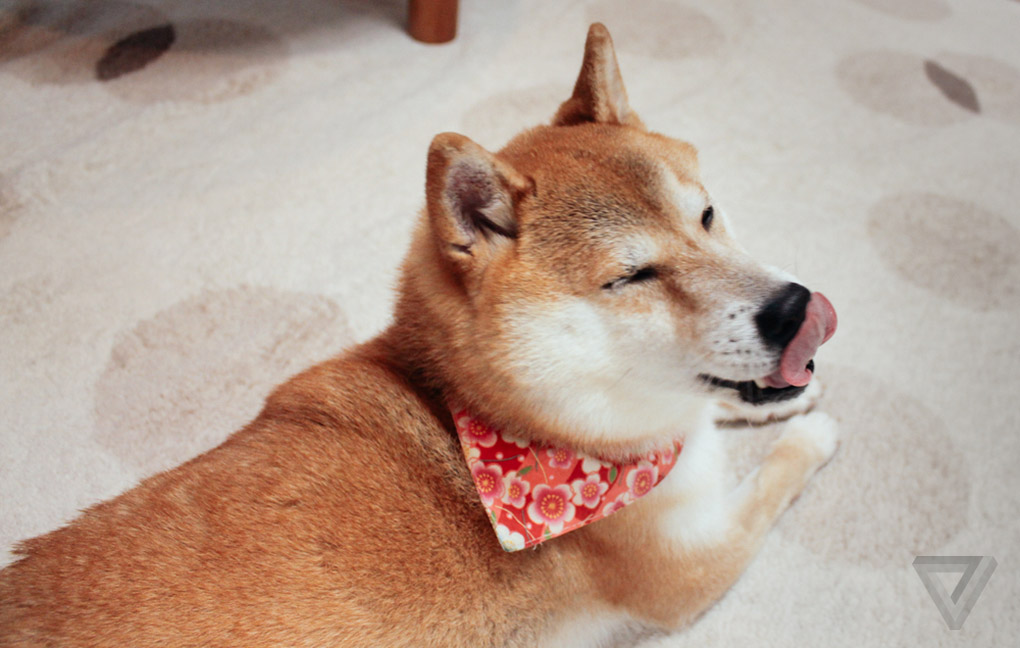 The furry face that launched a thousand quips nearly never made it to the web. Sato adopted Kabosu from an animal shelter in November, 2008, saving her from certain death. "She was a pedigreed dog from a puppy mill, and when the puppy mill closed down, she was abandoned along with 19 other Shiba dogs," the teacher explained. "Some of them were adopted, but the rest of them were killed."

A volunteer at the shelter gave the dog her name, a type of Japanese citrus. "Her face is very round just like kabosu [fruit]," Sato said. "I thought the name was perfect, so I kept it." 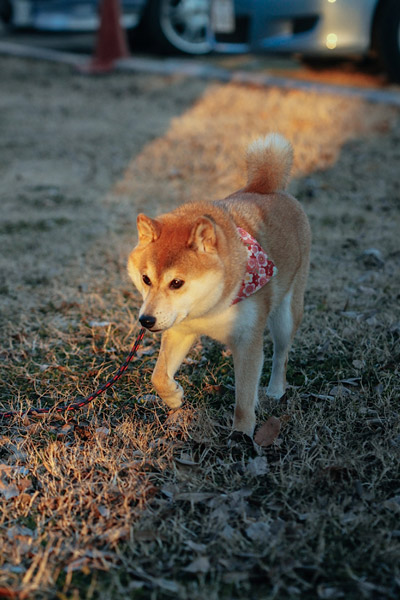 Half a world away in California, Jonathan Fleming, whose Shiba Inu Suki has also been co-opted into the doge meme, reflects on the breed’s strong personalities. Shibas "tend to be very intelligent, aggressive, and aloof to other dogs," he said. "They’re considered a primitive breed, almost like wild animals." Shibas date back to the third century BCE when they were bred to flush game from bushes. "I think their temperament fits Japanese people," Sato said. "They are very soboku," or, "beautiful in a way that is natural, not contrived or artificial," according to Laura Payton’s Shiba Inus: A Complete Owners Manual.

On February 23rd, 2010, before the meme had crystallized, Sato posted the fateful photo of Kabosu to her blog. The site is stocked with pictures of the Shiba Inu plus Sato’s two cats, Tsutsuji and Ginnan, frolicking with the teacher and her husband in and around their apartment 25 miles outside of Tokyo. "She was not loved when she was little, so I want to shower her with love as a member of my family," Sato said.

"Kabosu is very different from the typical temperament of Shiba," Sato explained. "She’s very gentle and calm; she loves being photographed." The hundreds of photos on the blog have paid off, and not just on Reddit. Sato started her blog in June, 2009, aiming to raise awareness about the dangers of puppy mills and adopted pets, joining a network of pet blogs where Kabosu quickly found an audience. The site is now the fourth most popular pet blog in Japan, getting around 75,000 hits a month, according to With, the country’s largest blog-ranking website.

"Since she’s a kindergarten teacher, her sentences are very warm, soft, and friendly," says Sarana Iwao, a Japanese fan of the blog and fellow Shiba owner, explaining Sato’s appeal. "She also lives a very normal Japanese woman’s life. She works full time, has two sons, and a husband who comes back late at night from work. A lot of people feel close to them."

But Kabosu and Sato’s celebrity in Japan, where they are known as real beings with lives and personalities, is quite unlike the flat anonymity of doge fame: in the Western world, Kabosu the dog is secondary to Kabosu the meme. 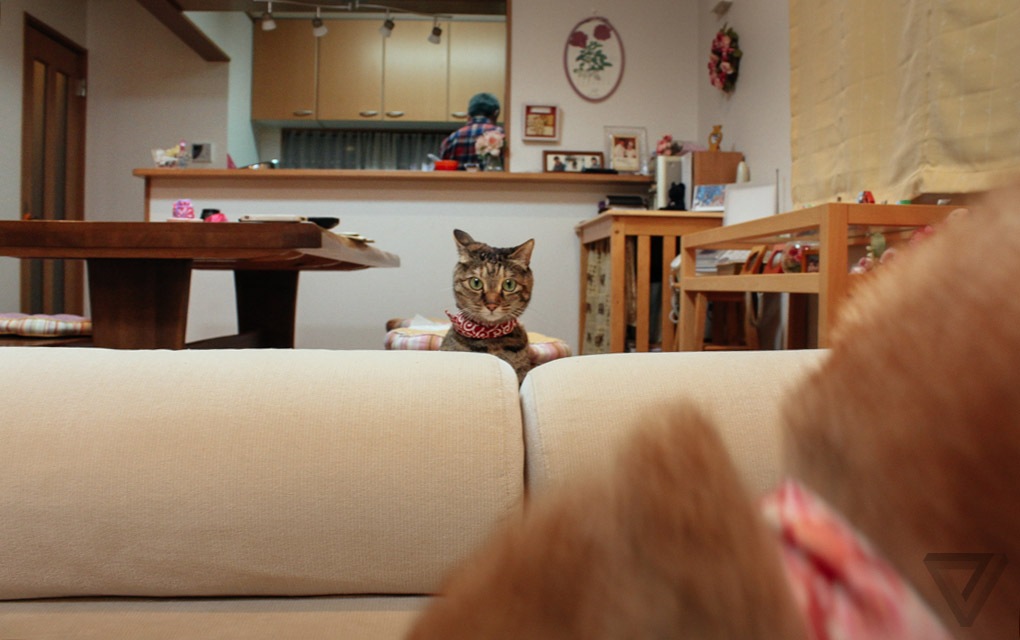 Doge began as a string of seemingly random web phenomena. In October, 2010, the word popped up on Reddit with a popular post of a corgi photo titled "LMBO LOOK @ THIS FUKKIN DOGE." As doge became synonymous with silly dog photos, the meme’s multicolored Comic Sans script evolved from the Tumblr Shiba Confessions, which launched in September, 2012 and described its mission as "funny text in Comic Sans over unrelated pictures of Shibas." 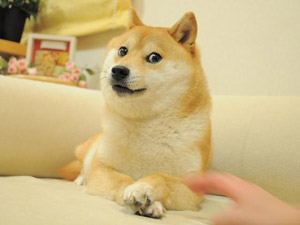 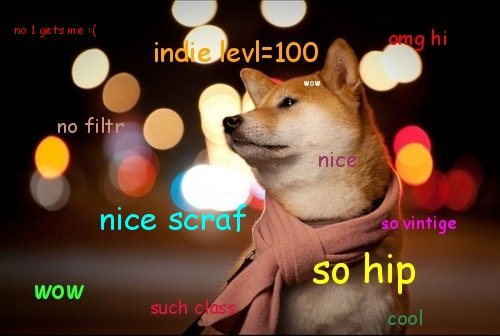 Google Trends shows the internet’s interest in doge stayed level until July, 2013, when Sato’s photo of Kabosu got picked up as the meme’s most iconic image. Kabosu’s face was erased from her head to make a blank template, replaced by everything from a cat to Nicolas Cage. Crack-smoking Toronto Mayor Rob Ford was turned into a doge ("much crack, such enabler"), and in early December the ultra-conservative Texas Representative Steve Stockman arguably jumped the shark by tweeting an inexpertly doge-ified image of Republican Texas Senator John Cornyn, calling him out for being too liberal ("wow, kill GOP filibuster").

As Gawker’s Adrian Chen argued, the doge meme is a prime example of what makes internet culture so awesome: it’s nonsensical, illogical, inexplicable, and yet totally hilarious and addictive. There’s an order within doge’s illogic. One linguist argued that, contrary to the general trends of the internet, doge allows for the expression of complex philosophical ideas. "It’s a meme of contemplation rather than action," io9’s Annalee Newitz wrote.

Now that even politicians are using it to cash in on a few cool points, the doge meme has clearly passed its cultural-relevance zenith. Yet as an organic form born from the internet’s collective id, it still has so much potential in the right hands. Pick a great image, pair it with some particularly bizarre nouns, and — every once in a while — it’s still possible to successfully "doge."

Perhaps we have Sato and Kabosu to thank for the meme’s guiding spirit, though the kindergarten teacher isn’t really in on the joke. "To be honest, some pictures are strange for me, but it’s still funny! I’m very impressed with their skills and taste," she said. "Around me, nobody knows about the doge meme. Maybe I don’t understand memes very well, because I’m living a such an analog life."

Yet the brush with viral fame is also unsettling. "I write on my blog almost every day and upload many pictures on the internet," the teacher explained. "It’s quite natural that anyone can see the photos and use them, but I didn’t think about it until I saw the meme." The experience has been a lesson in the public nature of online existence. "I learned that the risk of the internet is that anyone in the world can see my life on my blog," she said. 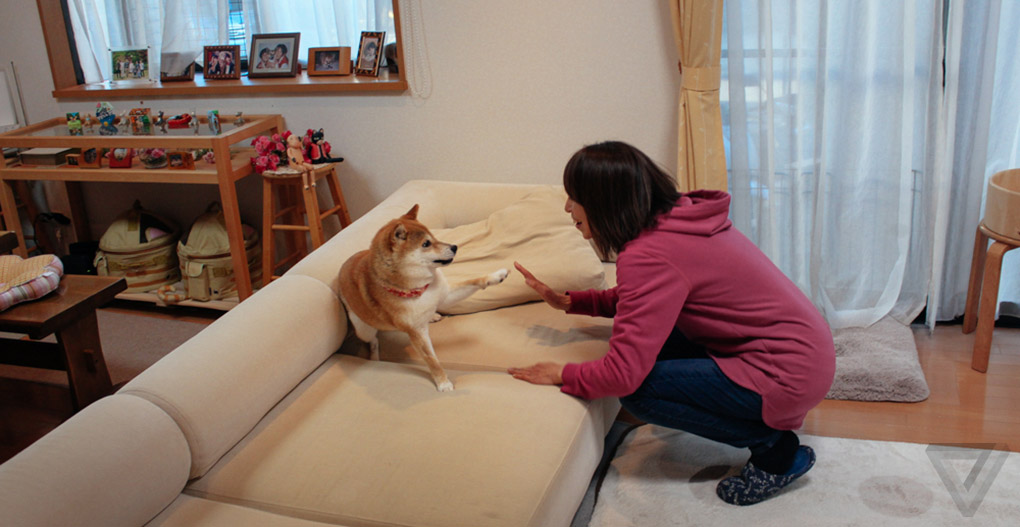 One day while working at a rental photo equipment company in San Francisco, a co-worker called photographer Jonathan Fleming over to show him the doge meme. "Someone knew I had a Shiba and pointed it out," he said. "I looked at the page and said ‘Ohhh, I took that photo!’"

An image of Fleming’s five-year-old Shiba Inu Suki wearing a purple scarf and gazing pensively into the distance in front of some artistically out-of-focus city lights had been turned into the quintessential hipster doge: "wow, such class, indie levl=100, so vintige, nice scraf."

The picture was taken in February, 2010 as part of a project in which Fleming published a weekly image of Suki, a compact, athletic dog with perky ears and squinting eyes. The photographer’s wife had accidentally run a scarf through the washing machine. "It became too small for any human being," Fleming recalled. "It was a cold winter for San Francisco standards, so we threw it on Suki. It looked really cute on her." On an evening walk one day, Fleming noticed the evocative lights and decided to compose the shot, illuminating Suki with a studio lamp. 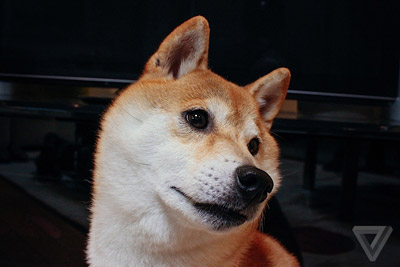 The fuzzy purple scarf lays in goofy contrast with the self-seriousness of Suki’s expression, making the photo perfectly meme-ready. "They’re a breed that’s very regal, very confident, almost snooty," Fleming said. "When you get them in a funny situation, I think that’s where the comedy is.

"The funny thing about Shiba is that their eyes are all black, they only look like they’re expressing themselves if they’re turning and you see the whites of their eyeballs," Fleming said. Looking back at Sato’s photo of Kabosu, it’s the same trick that makes the Shiba appear so hilariously skeptical.

"A lot of feedback I get is, Suki is such a good model, such a natural. In most cases that couldn’t be farther from the truth," Fleming said. "I just happen to catch her at a particular time where it looks like she’s posing." In other words, that inscrutable doge-meme quality is a rare find. "As many pictures as I have of her that she does exude Shiba spirit, I have 100 that look outrageously stupid," the photographer laughed.

The doge dogs have now gone viral IRL, too. "When I first got Suki, Shibas weren’t all that popular; folks couldn’t even pronounce the name. I think that’s changed because of the meme," Fleming said. "When I walk out on the street everyone goes, 'Oh that’s a Shiba!'" 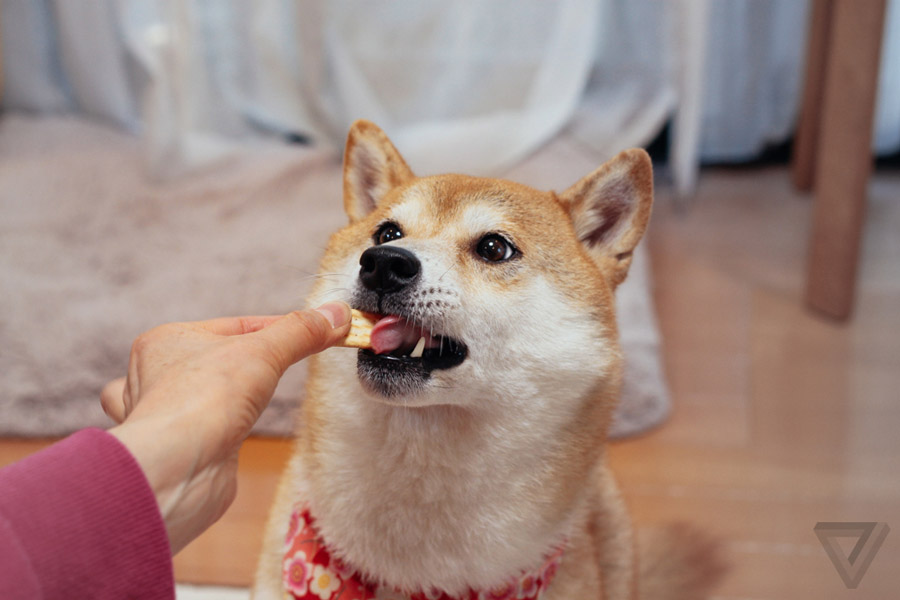 While neither Suki nor Kabosu are likely to become the next Grumpy Cat — making visits to the offices of US media companies and inking sponsorship deals with pet foods — Sato does have a goal in mind to take advantage of her dog’s sudden notoriety. "I want more people to know about animal shelters and puppy mills," she said. "I’d like to give back to them somehow, helping those abandoned animals. It’ll be nice that Kabosu can play that role."

Both shibes (dogespeak for "Shibas," of course) have taken roundabout paths to internet stardom — and in Kabosu’s case, that path has seen wildly different turns on opposite ends of the globe. Regardless of how we’ve come to know these dogs, though, the awkward twisting of the English language and the millions of pixels’ worth of colorful Comic Sans have seemingly been worth it if they help place an abandoned dog with a loving family. Who knows? The dog you save might just be the next great meme.